From the Bench: Offseason Acquisitions by Lakers include NBA Personnel Veteran Chris Cunanan

Amidst all of the talk of the Los Angeles Lakers offseason acquisitions and potential acquisitions on the player front, there’s a chance you may have missed a really good acquisition on the personnel front. The best part is that the acquisition has more than just Bridgeport ties. The acquisition has Bridgeport roots.
Christopher “Chris” Cunanan, a 2000 graduate of Bridgeport High School, is now officially a member of the Lakers. He joined one of the most storied franchises after spending five years with another NBA team.
The really good news is that Cunanan’s move to his new team won’t facilitate the need to get too familiar with his surroundings with the 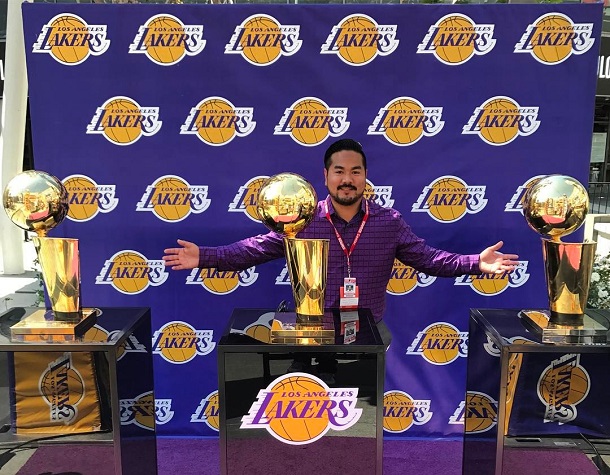 Lakers or even move from his residence. In fact, he’s actually working in the same building.
Cunanan left his gig with the Los Angeles Clippers as the assistant director of game presentation to become the manager of game entertainment for the Lakers. Both teams play out of the Staples Center.
“It was unbelievable organization When Steve Ballmer bought the team my position was created and what was great about that was I was able to create and mold the position as I went,” said Cunanan. “I did it how I wanted to do it and it worked out well.
“It was tough to go because it was a good five years with the Clippers,” he continued. “They treated me with great respect and I tried to return that respect. When I left, they gave me a personalized jersey and couldn’t have been better to me.”
The run with the Clippers is part of now nine-year run in the NBA. The first three came with the Cleveland Cavaliers, while his actual career in professional sports began 12 years ago. Ironically, it was that start with the Arizona Diamondbacks that got him to the Lakers.
“My supervisor reached out to me about the opening with the Lakers. He and I started in the industry 12 years ago,” said Cunanan. “The 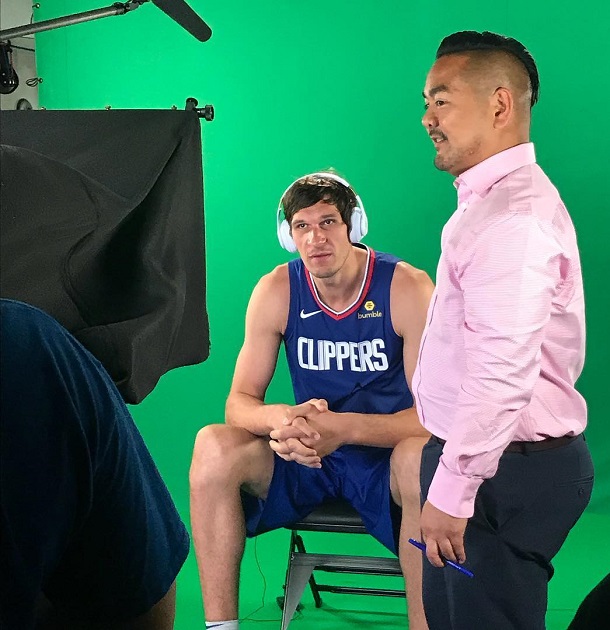 Lakers were looking to update and bring major changes to their entertainment experience and the role they were looking to fill was similar to my role with the Clippers.”
What will Cunanan’s efforts do for the Lakers? If you’re at a game, you’ll definitely see it. If you’re watching from home, you’ll also likely catch some of his work.
All videos and graphics during game days at the Staples Center are done and tested by Cunanan from video boards to ribbon boards. He also provides content such as stats for the evening and visiting team information that are utilized.
“There’s a rehearsal and production meeting prior to each game,” said Cunanan. “Each game is scripted out in advance and that’s something fans may not realize. The meetings to figure that out involves the full staff from the (public address) announcer to game management staff.”
One thing he won’t be doing like the player acquisitions is traveling with the team. That doesn’t mean the work stops.
“You’re preparing for the upcoming game and that’s something that’s pretty constant. It really picks up once you get the full schedule because you plan for the entire season from the anthems, halftime shows, sponsorship events and more,” said Cunanan. “Some games, 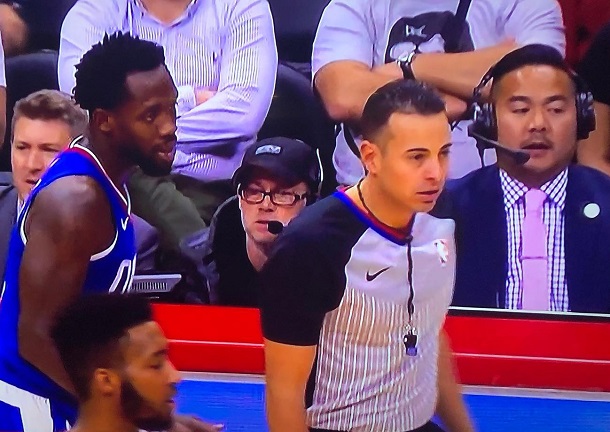 such as weekend games, require more planning. The road time is when you catch up.”
As for hitting the road for another gig, Cunanan wouldn’t mind staying put this time. He said he took this role with the expectation of it being a long-term gig.
“It’s the Lakers; one of the premier franchises in the NBA. I want to be a Laker for life,” he said. “Add to that my supervisor reaching out to me specifically for this role and you have a pretty good situation.”
The Lakers have been in the news – often leading the sports news – for months now as the free agency period came and went. The Lakers, through a trade, landed arguably one of the top five players in the game in Anthony Davis to go with their already top five player in Lebron James.
And they were one of three finalists for the services of Kawhi Leonard who many believe is the best player right now in the NBA.
“What’s ironic a month ago and last year I was rooting for the Clippers to get Kawhi. That shifted to me wanting him to a Laker so that’s kind of bittersweet,” said Cunanan. “I still have a lot of friends in the Clippers organization, so I want them to do well, but just not as well as the Lakers.” 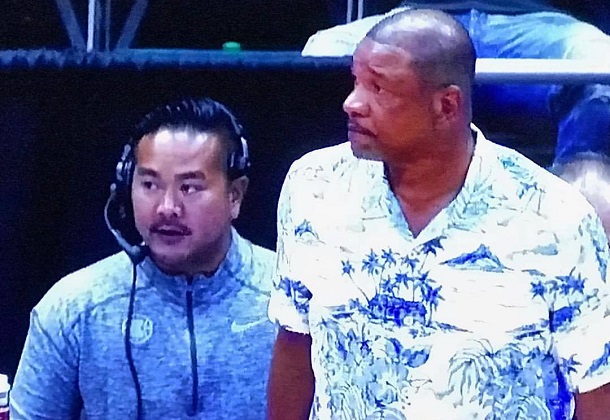 One might think being involved with the Lakers and around world-famous individuals like Lebron James would leave Cunanan starstruck. However, he actually spent time with James while in Cleveland when players such as Shaquille O’Neal were on the roster.
“I’ve been fortunate to be around some really world-class players like Lebron and Shaq, even though it was at the end of his career,” said Cunanan, a 2005 West Virginia University graduate. “This year, with probably two of the top five players in the league, it won’t really leave me starstruck. Once you’re around it, it takes something unique to get you worked up to see someone.”
Getting worked has happened. And it happened courtesy of a fellow West Virginian.
“I really don’t get starstruck, but I did when I met Jerry West when he joined the Clippers. He has an aura around him and I’m not the only one that will tell you that. You can see it just by watching the players around him because they all respect him,” said Cunanan.
Cunanan said he had his first encounter with West in 2017 as he was going to take a charter flight with the team for a training camp in Hawaii. West was in the terminal waiting for the flight when Cunanan approached him.
“He’s sitting down by himself, so I realized I had an opportunity to speak to him. I said, ‘Hello Mr. West’ and introduced myself. The first thing I told him was that I went to WVU,” said Cunanan. “That struck up a friendly conversation that lasted for about 30 minutes where we 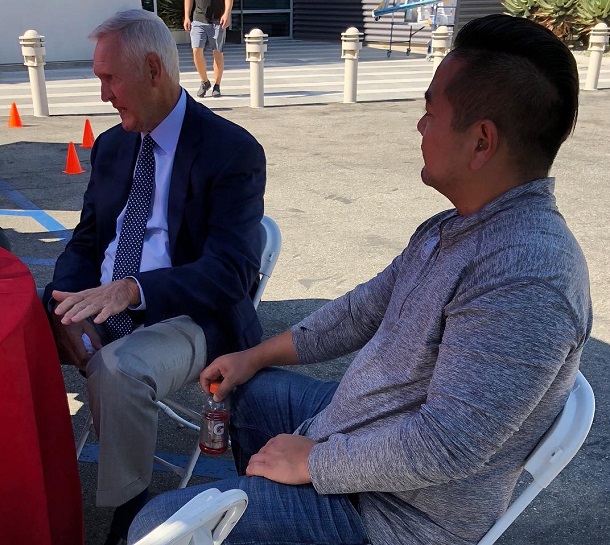 talked about the Mountaineers, the Greenbrier and just about everything else back home.
“What struck me was he was so easy to talk to,” he continued. “Since that time, I probably had four or five more conversations of length with him and each time you feel pretty good when you’re done.”
As for the Lakers, Cunanan said he may be the only person with West Virginia connections on the staff. The one exception is Jerry West’s son Ryan West, the Lakers director of player personnel.
“It’s always nice to know someone from home, but the most important thing is having the pressure on you to make the atmosphere at the games one where the players feel comfortable succeeding, especially when they’ll have the pressure on them this year,” said Cunanan. “We may not impact wins and losses, but we impact the experience of the fans and they often have an impact on the game. You may not see me a lot at the games, but people will see my work.”
A few games this year, said Cunanan, he’ll be out of the control room and courtside at the table producing in his role of backup game producer. It’s at those times, particularly when the officials head to the scorer’s table to review a call, Cunanan will be spotted. It was often the case when he spent time with the Clippers and it was the time he was reminded of being back home.
“Being on television isn’t a big deal, but what makes it big is my friends back home like Alan Robbins and Chris Sandy sending me screenshots and letting me know they see me,” said Cunanan. “That’s when you’re on the opposite side of the country and you suddenly feel like you’re back home. It just makes this situation I’m in even that much better.”
Editor's Note: Top photo shows Chris Cunanan with some of the Lakers haul of NBA championship trophies, while he's shown in the second photo assisting with an interview with former Clipper Boban Marjanovic. In the third and fourth photos Cunanan can be seen courtside with Patrick Beverly and Coach Doc Rivers, respectively. In the bottom photo, Cunanan takes some time in with logo and WVU alum "Mr. Clutch" Jerry West.