The Grapevine: A Family Tree Story with Climbs Out on Unknown Branches Resulting in a Beautiful Ending

By Rosalyn Queen on October 28, 2021 from The Grapevine

If you are one of those individuals who is trying to trace their family history, here is a little story about just what might happen.
Several years ago, I started tracing my family and while I was in San Giovanni in Italy. Pietro Mazza took me to the Municipal Building where we proceeded to begin a family tree.
Before I left for Italy My cousin Thelma Ferrise advised me that her mother, who was a cousin to my grandmother, told her that my real last name was Oliverio and not Burnett.  While searching for my dad’s birth certificate, I found that his true birth certificate was under the name of 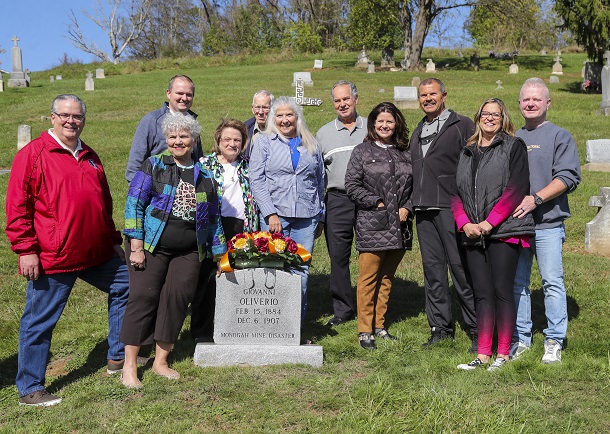 Oliverio.  Further research found that my grandmother had married Giovanni Oliverio and they had one son Biaggio Oliverio born on August 29, 1905, the birthday of my father.  A birth certificate for my grandfather Giovanni Oliverio was found and his parents were Biaggio Oliverio and Gallo Maria. After extensive research I was unable to find any other children born to Biaggio and Maria.  This would have help me locate Oliverio's we might be related to.
Wanting to further document this information, with the help of Merle Moore, I was able to secure information from the National Mine Library.  I had been informed that my grandfather had been killed in the Monongah Mine explosion.  I found a listing of survivors to this explosion and sure enough listed as survivors to Giovanni were Giovanna and Biaggio.  Their address was listed as Via Cucina, where the home place still stands and is inhabited by Oliverios.  Several members of our family have visited this house where my father was born.
As the age-old story is told, they were married, had a son, the father left Italy to come to America, found a job in the mines and was killed.  After three years Giovanna wanted to marry Lougi Burnett, but first had to secure a death certificate for Giovanni.  Once this was taken care of, they were married and she had a daughter, Rose.
As the sequence goes Lougi came to America and got a job in the mines.  He sent for his family to join him.  When coming through Ellis Island, Giovanna was afraid to say that her son had a different name than hers, so she told the officials his name was Biaggio Burnett.  So, Bill Burnett maintained this name until his death.
When I was certain that my research was true, my brother Bill and my sisters Cathy and Joan and I decided we would go to Monongah and try to locate the grave.  With the help of Cemetery maps we were able to locate the grave.  After approximately 114 years we felt it was time to mark the grave.
The grave now has a beautiful marker and generations after us can locate the final resting place of our grandfather, Giovanni Oliverio.
Good luck to Donna Leeson on her retirement.  I found out that Marie Elena Baldini will be the new tenant for this Flower shop.
I hope you are all staying healthy, take care and until next week “Now You Have Heard It Through The Grapevine”

That is an amazing story Rosalyn. One that I'm sure could be repeated many times over for many of your generation if they had your perseverance. The fact that it ties in with the coal mining that went on back in the day in this area is also quit interesting. Great to see the familia gathered by the long over due marker. To salute...