The Grapevine: Generations of Family in Service to the Community, Local Businesses and Talk on the PWA

By Rosalyn Queen on January 21, 2021 from The Grapevine

A highlight for the new year, 2021, was the swearing in of my grandson, Ben Queen, as a member of the West Virginia House of Delegates.  He will be starting his third term when he returns to Charleston in February.
Just thinking of him as he took his oath stirred a lot of memories of past officials on our family.  Ben continues to serve our county as the fourth generation of Queens.
Ruby Keister was the first Queen to be elected. She served as County Commissioner. Ruby’s maiden name was Queen. She was the daughter of Olive and Bennett Queen. 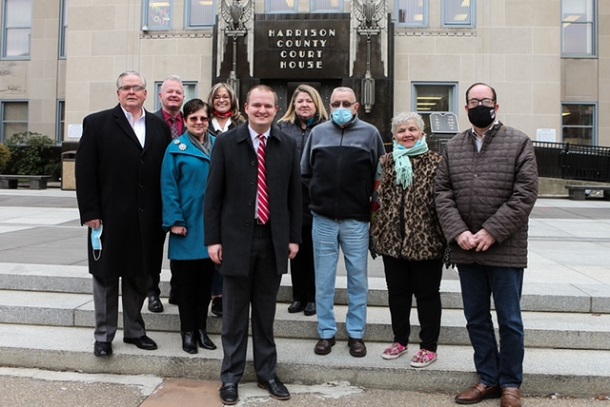 Next in the succession was Fray G. Queen, Jr. who first was elected as a constable and then as a magistrate for many years before his retirement. The third generation to serve was Michael Queen, who was elected to serve as a House of Delegates member and then served as a member of the Harrison County School Board. Although Andy Lang, who is married to Lisa Queen Lang, is an in-law, he is now serving as the Mayor of Bridgeport.
Judge Thomas Bedell swore Ben in. Judge Bedell has been like a member of our family as Leslie Queen Pruitt has been his Court Reporter for over 30 years.  Although Leslie's job is not an elected one, she has served Harrison County and its residents. Completing the fourth generation will be Ben and at his young age, the sky is the limit.
I have often said that many of our local families seem to follow in the steps of their parents when choosing a career. Most evident of this are the families who enter into the food industry like the Oliverio;s, the Minard;s, the Ielapi's, the Lehosit's and then you have the D'Annunzio's and the Brunett's in the bread industry. The Spatafore's followed their father in the furniture business and the Henderson’s continue the construction business. I am sure that there are many more families who can lay claim to children following in their footsteps, but these are just a few.
I seem to have recovered from the after effects of the COVID vaccination and am now waiting for my second shot. I feel very confident that I made the right choice on getting the shot. I hope each of you will also take advantage of it.
I want to give you a report on the Progressive Woman's Association. We continue to serve our community with a Food Pantry and a Pet Pantry.  The community has been very generous with their donations and we continue to meet the needs of many of our residents. I often wonder what might happen if we were not here to serve these people.
Our income has been reduced drastically because of the limited rentals of our facility. I would like to urge you to consider using the facility as there is plenty of space to do social distancing. You might also consider donating money to the PWA to use in keeping the center open.
We have applied for a few grants but to date have not heard from them. We continue to have utilities and upkeep of the facility.  We have one paid employee and a part time maintenance man. The young ladies of the YWPA continue to operate the 24-hour food pantry located in front of our building. I hope you will consider taking the PWA on as a community project. Your help will help them help our community.
There is so much sickness out there and more deaths than we want to think about. I hope you are remembering these individuals and their families. Remember them also in your prayers.
Take care of yourself and take care of each other and until next week, “Now You Have Heard It Through The Grapevine.”
Editor's Note: Pictured, from left, Mike Queen, Dixon Pruitt, Paula Carter, Ben, Christy Thompson, Fray Queen, Rosalyn Queen and Andy Lang.