There is not a movie for what happened, and with all due respect to Miracle on 34th Street, there was a miracle here in Bridgeport involving a roadway as well. I have not talked about it for years, but I always called the incident “The Miracle on Johnson Avenue.”
The situation happened on Oct. 14, 2013. It was approaching 5 p.m. along the stretch of Johnson going under the four-lanes of bridges of Interstate 79. 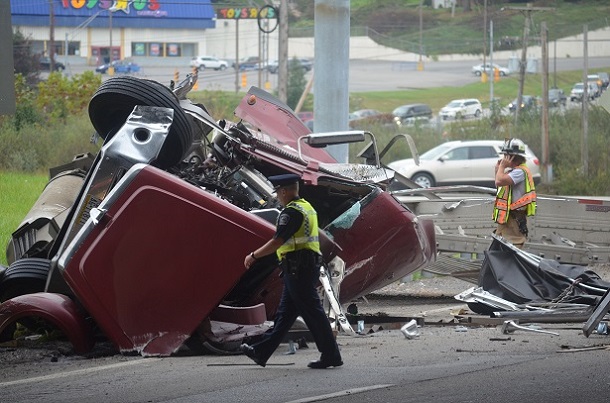 Head to that area now. Do it tomorrow, or the next day. See how long a stretch of time when the roadway – at that time of day (and in this case a Columbus Day holiday) – is void of any vehicles.
Barring a backup or some other unique situations, it simply does not happen. It is one of the busiest stretches of roadways in the city coming off of one of the busiest interstate intersections in all of West Virginia.
I am not the only one who thinks what took place was miraculous. Count Bob Shaw, then and now working as a bridge inspector out of the District Four offices of the West Virginia Division of Highways, among them.
“What happened that day was a miracle,” said Shaw, recalling the situation nearly eight years later. “If it wasn’t a miracle, it’s about as close as you can get to one.”
Shaw should know. He was outside of his office when it took place. The time is not exact, but it was near 5 p.m. as the story I wrote went 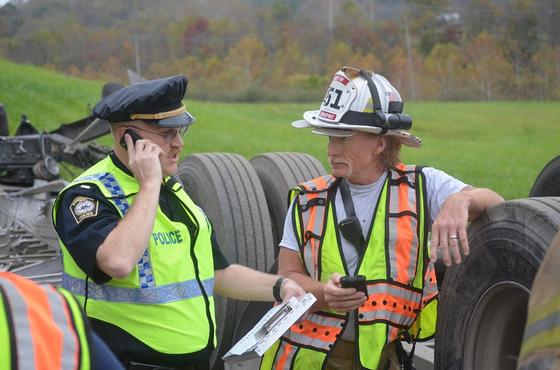 live at 5:42 p.m. after getting photos and talking to authorities and, at the same time, being dumbfounded at what I was about to report.
A tractor trailer had tumbled off of the southbound side of the I-79 bridge right at Exit 121 and onto Johnson Avenue below. The cab of the vehicle was a mangled heap of twisted steel.
“I heard it when I was outside. It sounded like a bomb went off,” said Shaw. “Then, I saw a big plume of smoke rising up from that way. You could see the bridge, but not Johnson Avenue from our office because of a hill that’s there.”
Shaw and since retired co-worker Rodney Underwood went over to the scene, assuming initially the tractor trailer had struck the bridge from below. He would find out quickly he was wrong.
“When I found out what happened, I was certain there were multiple deaths,” said Shaw. “The truck was destroyed. Eventually, I found out the driver hit the guardrail above and rode it for about 200 to 300 feet and then hit the concrete barrier and rolled into the middle of Johnson Avenue.” 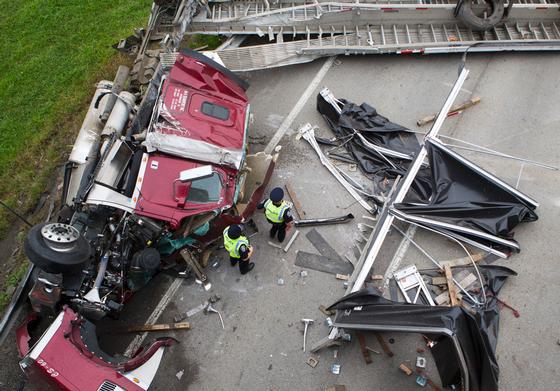 When Shaw was there, he saw the mangled cab. He did not find out immediately that the driver of the cab was one of the few people on the scene besides himself and his co-worker.
“I think the guy was shook up, but I don’t think he was scratched up,” said Shaw. “That alone was a miracle.”
Former Bridgeport Firefighter Donnie Lindsey was also among the first on the scene. Like Shaw, he was certain things were going to be bad.
“I was shocked, very shocked, to learn that nothing bad happened as far as deaths,” said Lindsey, who today is Safety Manager Diamond W, Shinnston’s Assistant Fire Chief, a part-time paramedic for Mon County EMS, and also teachers for WVU’s Fire Service Extension. “… The driving being okay was more than a relief because he was on one heck of a ride. You scratch your head when you looked at the cab he was in and ask how in the world did he survive.
“The other thing was wondering how in the world no one was on that road. How no one else was killed or, for that matter, even slightly 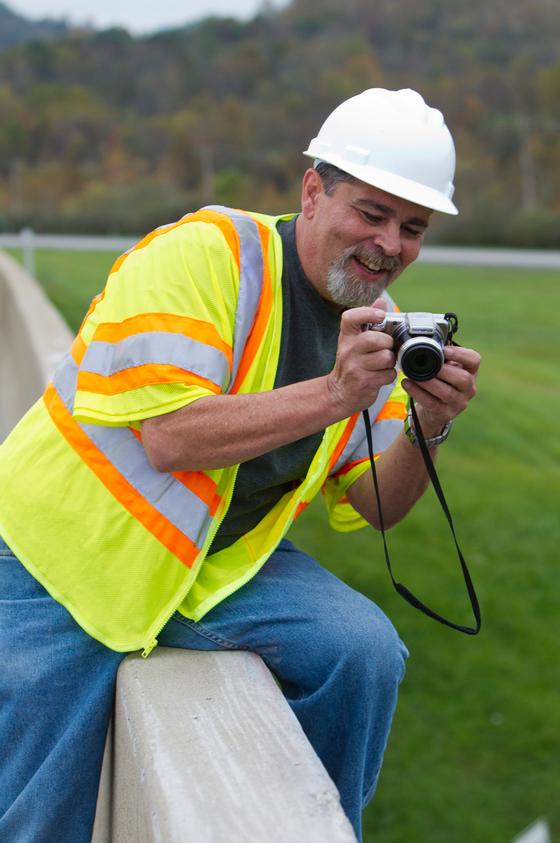 injured is a miracle,” Lindsey continued. “I absolutely believe it was a miracle.”
The timing of the day certainly added to the shock no one else was hurt. Yet, Shaw and Lindsey remembered something else. There was no school that day and, at that time, school buses are often bringing kids away from extracurricular activities or kids would be scurrying to and from Meadowbrook Mall after classes.
“It was Columbus Day if I remember correctly,” said Shaw, who does remember correctly. “There should have been buses and even without the buses, there is almost always traffic under that bridge at that time of the day. It still amazes me. One of the most amazing accidents I’ve seen where no one was injured.”
Lindsey essentially said the same. And for those two, that’s pretty heady stuff. For a long time, Shaw was one of the top photojournalists in the state and was frequently on the scene of accidents, while Lindsey’s job with the Bridgeport Fire Department and jobs in the field since has done the same. Together, it is likely they have been on the scene of more than a thousand accidents of minor and major natures in close to 40 years of combined experience in their fields.
“You have to understand the cab was crushed like a water bottle,” said Shaw. “How he crawled out is as amazing as not being seriously injured.”
A witness the day of the wreck told me that the driver “was just sitting there” as emergency crews arrived. As I pulled up on the scene and saw the mangled wreckage of a truck, I already knew had plummeted off the bridge, Lt. John Post was directing traffic. I was kind of caught off guard by the lack of ambulances on the scene and asked Post how many were killed.
“None,” was his response. Although I did not say it, my thought was “he has to be kidding” in a situation where a pro like Post would not 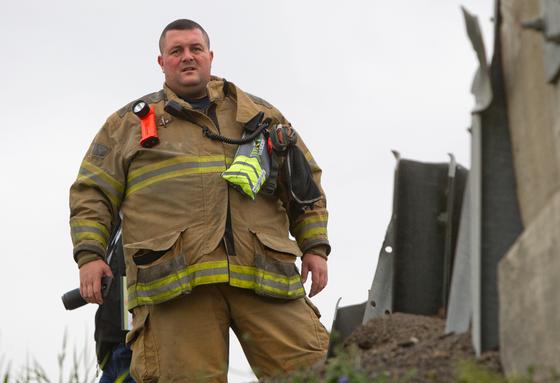 kid. And he was correct.
Lindsey was shortly helping with traffic control. It would be needed.
The wreck was so bad, despite involving just one vehicle, that the section of Johnson Avenue in both directions was closed for six and a half hours.
The driver, who was from Oil City, Pa., did go to United Hospital Center with what Post described as non-threatening injuries. He was in stable condition at the time before being released.
“I don’t know if there’s been too many luckier individuals,” said Lindsey. “I do know it was a miracle.”
Indeed, it was – a Miracle on Johnson Avenue.
Editor's Note: Top and third photo show the extreme damage done to the tractor trailer,while the second photo shows Bridgeport Police's John Post talking to now retired Bridgeport firefighter Randy Scott. In the fourth photo, Bob Shaw with the DOH begins taking pictures of the bridge structure checking for damage, while firefighter Donnie Lindsey is shown below. The majority of the photos are by Ben Queen of Ben Queen Photography.