Editor's Note: The partial article below is from our friend David Sibray who runs West Virginia Explorer Magazine and the Web site wvexplorer.com. We encourage you to take a click through to the rest of the piece that certainly many above the age of 40 will remember from their youths. An excellent read about that time period as well as the history of a place for generations that was part of a myth that was very real.
If you were an unruly boy growing up in West Virginia before the 1980s, there's a chance your misbehaviors were met with the threat of banishment to Pruntytown.
Pruntytown! Any infraction that could not otherwise be dealt with might lead to the mention of the word by adults. For many, the threat of 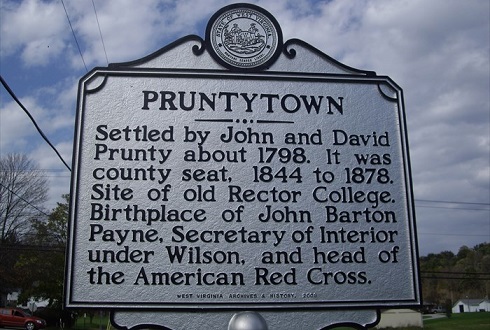 being shipped off to this dark and mysterious place was so effective because it was practically incomprehensible.
What was Pruntytown? Could there be such as place? That uncertainty seemed to be common.
"I remember not understanding exactly what Pruntytown was, and that made it all the more threatening," recalls Carlos Escobar, who grew up in Charleston.
"I did not really believe in the place or that I'd be sent there, but because it was called a 'town' and because it might have been associated with prunes. How were prunes involved?
"It was bizarrely effective—on the same level as being given lumps of coal rather than toys for Christmas."
However, adults living near the town knew it was a very real place. Photographer Brian Peterman, who grew up not far from Pruntytown, says knowing it was real might have worsened the threat.
"We were told that there were people who drove around in vans like dog catchers ready to capture children who stayed out too late," Peterman laughed. "And whereas boys were threatened with Pruntytown, girls were threatened with being sent to Salem."
Click HERE for the rest of the story.