Two New Restaurants, Other Businesses Set to Open in Spring and More on Way Just Outside Bridgeport

It’s not in Bridgeport, but the Eastpointe Shopping Plaza sitting right across the city limits in Clarksburg has long been an area where city residents and others throughout the region frequent to meet their various retail needs. And this summer, there’s a chance plenty of additional needs will be met.
For those wondering about the construction taking place along Emily Drive in the former Sutton Inn area, two new buildings are up and a third one is on the way. That’s according to Jason Donahue, the principal owner of FEOH Realty based out of Morgantown. 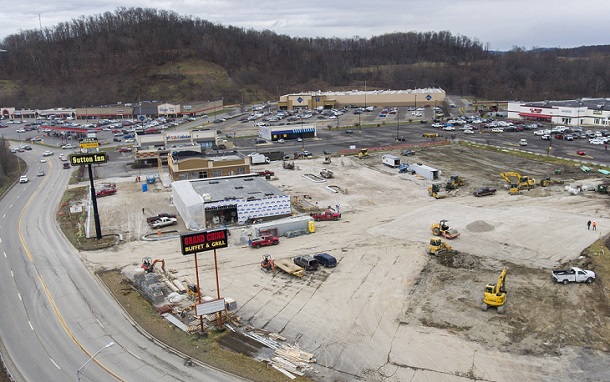 “We’ll be starting construction this month on a third building at the site,” said Donahue. “It will be just over 11,000 square feet.”
Between all three buildings, Donahue said there will be roughly 20,000 square feet of space. The total investment is $4 million.
That, of course, leads to what’s on the way. The two existing buildings are complete and have been handed over to tenants that have executed leases. The first building, which is the singular stand-alone structure, is Aspen Dental.
“ 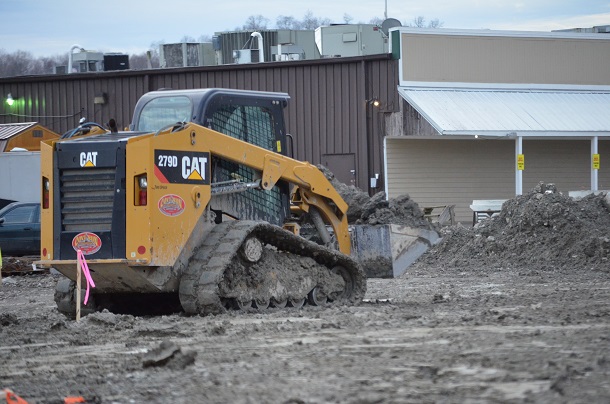 They are a national brand with several locations in West Virginia,” said Donahue. “The building they will occupy is 3,500 square feet.”
The second building is the one, right now, that will draw the most interest – primarily because a restaurant is involved. Actually, two restaurants are involved of the three tenants he was able to publicly discuss.
Qdoba and Penn Station will be the two dining establishments. Qdoba is a casual national restaurant that features Mexican-style cuisine, while Penn Station features hot-grilled subs, fresh cut fries and more. The other business secured for the 5,200 square foot building is Verizon Wireless.
“We’re excited about all three, but we know people get excited anytime there’s a new restaurant because they see eating out as convenience as a social event,” said Donahue. “This allows those going out place to have a good time. We believe those businesses will be up and running in mid- to late-spring.” 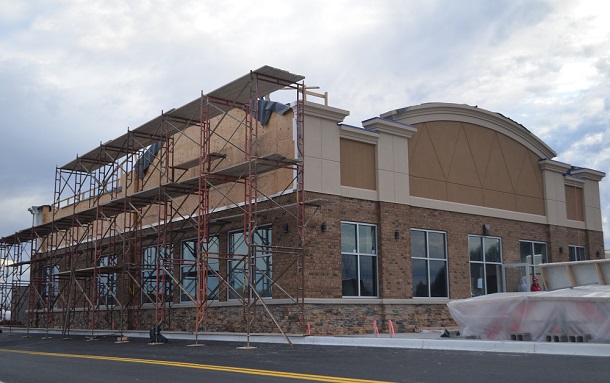 The third building that will be starting this month was initially delayed. The reason, said Donahue, was to make sure the other two buildings were complete. He anticipates the building, which will be a one-story structure like the others, to be completed by mid-summer.
“We actually have 45 percent of that building either pre-leased or with a letter of intent,” said Donahue of the building that will likely have room for five additional spaces.
“I can’t announce yet, but we have more committed. One of those is a restaurant; it’s a national brand,” said Donahue, whose company handled Morgantown’s Town Centre expansion. “The remainder will be retail and probably a fourth restaurant.”
Donahue said they’re excited about the opportunity. They believe the region and the location is prime for activity.
“This is a regional market and we’re aware of that. The retail and consumer business usage is much bigger than just the immediate area and the surrounding area,” he said.
Donahue had words of praise for both Clarksburg and Bridgeport. Clarksburg helped facilitate the construction process in their city, while Donahue said water and sewage services will be provided by the City of Bridgeport.
“All the local government authorities have been a pleasure to work with,” he said.
Anyone interested in beginning a business at the remaining available space can contact Donahue. He can be reached at 304-599-4929.
Editor's Note: Top photo is an aerial photo by Ben Queen of www.benqueenphotography.com showing the site where the new buildings are going in. The work to the right is where the old Grand China Buffet was located. Second photo shows earth being moved at the site, while the third picture is of the new Aspen Dental building. Below is a rendering of what the third building, which is yet to see construction begin, will look like. The rendering was submitted by FEOH Realty.

Good article about growth. What is happening about the traffic issue in that area? Will they put in a turning lane or just continue to have accidents?