It would be hard to imagine there could be anything positive that would emerge from Johnson Elementary’s issues with a student population nearly reaching capacity in a school that is brand new. However, Principal Vicki Huffman said such is the case.
“We definitely have a bright spot, and it might be the only one, as a result and it is helping with our scheduling for staff and it’s helping our 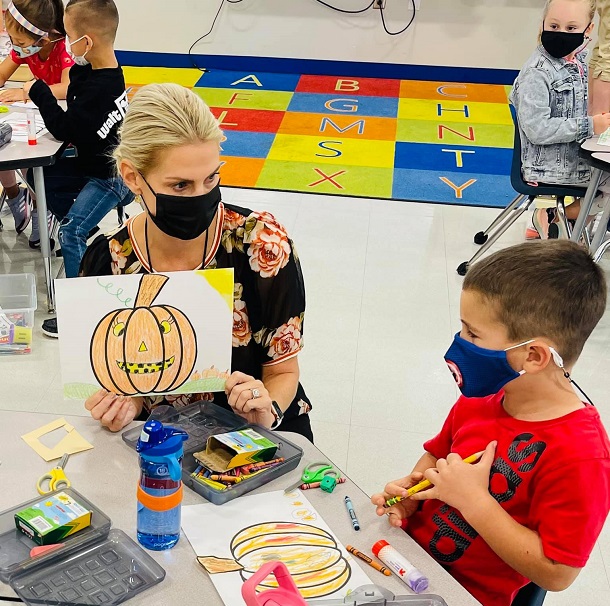 students get exposed to other teachers, they did not get a chance to prior because of the numbers we had.”
Those numbers the school had, and still has, student population wise had led to the addition of Whitney Horne. She has been added to the staff and is teaching art in students in kindergarten through third grade.
“She goes to each grade one day a week doing art and co-teaches art with one of our staff members as well,” said Huffman.
Earlier this year, Huffman voiced her concerns about the school nearing capacity to the Harrison County Board of Education. The situation was not unexpected when the new school opened three years ago, but when acquiring millions of dollars in School Building Authority funds from the state the formula does not allow for future growth and concerns voiced by JES administrators and former superintendent Mark Manchin had no impact.
Huffman did say despite having a situation such as five kindergarten classes with roughly 23 students in each as opposed to four as one example, students and staff were still handling things in a solid fashion.
“They’re doing a great job in somewhat crowded conditions,” said Huffman. “We have a great staff, and we have great students.”
While Horne is new, Huffman said her presence helps free up scheduling where students are able to be exposed to other teachers as well. Prior to Horne’s presence covering students to see other teachers was difficult.
“With Mrs. Horne here, the teacher and the kids win,” said Huffman. “Again, it’s about the only bright spot we can see from this, but we’ll take it.”
Editor's Note: Shown is Whitney Horne teaching one of many students at Johnson Elementary School. Photo courtesy of Johnson Elementary School Facebook page.