UPDATE: Suspect has been identified thanks to the public. Sgt. G.T. Collins is appreciative of the community's support.
ORIGINAL: The Bridgeport Police Department is hoping you can assist in an ongoing investigation for a crime that took place on Main Street.
According to Sgt. G.T. Collins, the incident involves shoplifting. It took place Sept. 4 at 9:45 p.m. at the BFS situated on Main Street.
The incident started with a male suspect pulling into the parking lot and parking at the gas pump despite not getting gas. Shortly after that, the criminal activity for which he is being sought began. 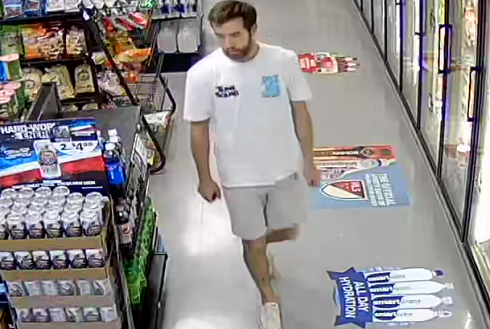 “The male selected merchandise from the store shelves and failed to make payment before leaving the store,” said Collins.
Based on surveillance footage, Collins has been able to determine the suspect was driving a Ford Fusion, white in color. The person also is a white male who is approximately 6’0 tall with dark brown hair, and a beard.
In this particular case, the suspect is wearing a white t-shirt with “Tune Squad” on the front of the shirt and “Space Jam” characters on the back of the shirt. The suspect also wore tan shorts, and white shoes.
If you recognize the individual, the car, the clothing, or have any information relating to the contact Collins vie email at tcollins@bridgeportwv.com. You can also call 304-848-8260, or his direct line at 304-848-6111. If he does not answer, leave a message.
Editor's Note: Photos courtesy of the Bridgeport Police Department. More photos are in the gallery below.