Bridgeport Police are hoping the public can assist them in solving a case involving destruction of property and leaving the scene that took place Tuesday at Charles Pointe.
Officer L.D. Janssen was on the scene reviewing a situation that took place at 8:24 a.m. Tuesday, according to the Harrison County 911 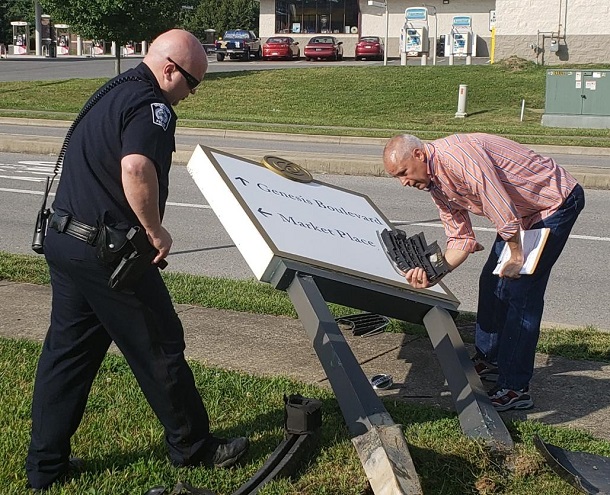 media log. What he was reviewing was the destruction of a directional sign – and a rather large one – at the development.
The sign in question is located in front of the new building that houses the Greater Bridgeport Convention & Visitors Bureau, Fairmont State University and the Mountain East Conference.
One thing working in law enforcement’s favor is that there are witnesses and they know what type of car it was. The vehicle was a Nissan, likely a smaller model such as a Sentra, and appears to be a 2018 model.
The reason for that is that the vehicle that struck the sign left behind a Nissan emblem, as well as part of what appear to be the front bumper that had information included with it. Charles Pointe Director of Development Mark Dellana told Officer Janssen a piece of the car he looked at was dated 2018.
Dellana said that according to those who saw it, a small car entered the parking area on the side of the building and ended up jumping the curb, picking up speed and then slamming into the sign. He then said the vehicle went backwards into the same parking area before leaving the scene.
A witness, Dellana said, managed to take a cell phone photo of the car. Janssen was working on a getting a statement from the witness before 9 a.m.
According to Janssen, the person will be charged with the aforementioned destruction of property and leaving the scene. He said both are considered misdemeanors.
If anyone has information, contact Janssen at 304-842-8260 and ask to be transferred to his desk. His direct line is 304-842-8267. If he does not answer, leave a message.