With the holiday season at hand, chances are good there will be an uptick in shoplifting activity. Bridgeport Police are hoping you can assist in a case where it appears one individual got an early jump on things.
Sgt. J.M.  Holley is asking for the community’s help in possibly identifying an individual involved in an alleged shoplifting case recently at Meadowbrook Mall. The situation took place Oct. 2 at 12:40 p.m. in Tru South. 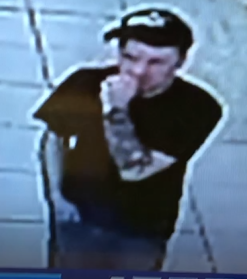 Holley is hoping the grainy images taken from surveillance will be able to be identified by someone to help lead to a potential arrest.
“From video surveillance, the suspect appears to be in his mid-20ss, approximately 5’9” and 180 pounds. The suspect was wearing a black shirt, black pants, black shoes, and black hat with white writing on it,” said Holley. “The suspect also appeared to have a half sleeve tattoo 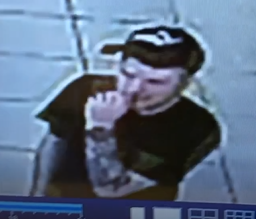 on his left arm.”
The man in question is wanted in relation to the alleged shoplifting. Holley said the merchandise taken totals approximately $500.
Arrests from surveillance images posted have led to several solved cases for Bridgeport Police, as well as other law enforcement agencies.  Holley said members of the department appreciate the help.
“As always,  the public is very helpful when it comes to these kind of situations because we are called after the fact, which as in this case we got called two days after the shoplifting had taken place because even the store did not know at the time that items had been stolen on the day it occurred,” said Holley. “Once we are called, the only thing we can do in most cases is watch video surveillance and try to identify someone off a picture or video. We don’t know everyone out there, so we need assistance from the public to help identify who these suspects are.”
The suspect is facing misdemeanor shoplifting charges unless the charge will be a third offense. A third offense means the suspect will be facing felony charges.
Anyone with information is asked to contact Holley at 304-848-6112 and leave a message if he does not answer. He can also be reached via email at mholley@bridgeportwv.com.