U.S. Senator Shelley Moore Capito was in Bridgeport and throughout North Central West Virginia on Monday. And according to her press office, she was there to take part in a roundtable talk on economic development opportunities and projects at the North Central West Virginia Airport.
While that held true, Capito (R-W.Va.) did more than just visit and talk about the ongoing success at the NCWV Airport. Capito also made a stop to The Bridge Sports and Recreation Complex and went inside the $50 million Citynet Center.
“What a magnificent facility,” said Capito, who praised many of the features of the Citynet Center such as the climbing wall. 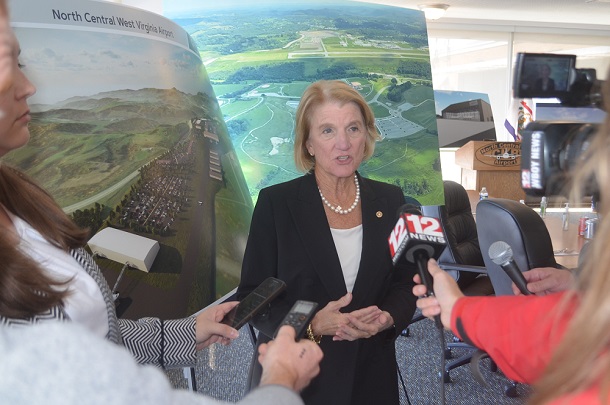 Capito’s visit was two-fold. First, she wanted to see the investment in the tens of millions of dollars made by Bridgeport and talk about how it is another economic driver for the region and state.
“Parents and families travel a lot for their children’s sports. I know I did with mine and it’s even more (now), she said. “… It’s great to promote family friendly sports and tournaments. You get the hotel, the restaurants. That facility is just magnificent. It is very exciting to see.”
It is “magnificent” enough for Capito to see it to get an idea of what is coming to Charleston. In August, the Capital Sports Center, which will be located in the site of the former Macy’s at the Charleston Town Center Mall, was announced.
“I wanted to see what kind of vision a downtown Charleston sports complex could have,” said Capito. “They have some different ideas, but it is basically the same thing to be a magnet for a lot of things.”
Capito said that project would also come with a hefty price tag. She said it would run $80 million.
The main focus of the Bridgeport visit was to talk about the airport and its ongoing terminal project. The project also will be in the tens of millions of dollars when completed, and Capito said it will see plenty of spinoff economic activity in existing businesses and at the future Aerotech Business Park near the terminal site. 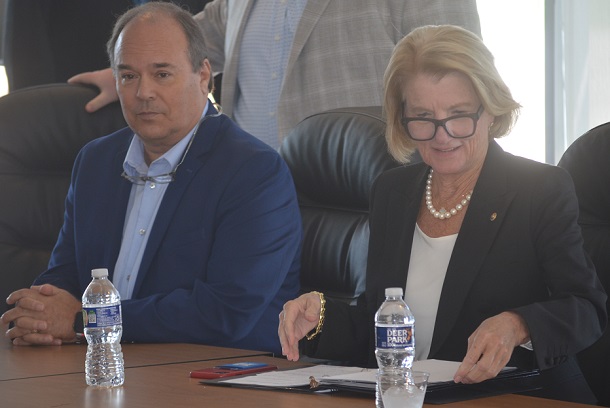 “I see phenomenal growth,” said Capito, who talked about MHI RJ (Mitsubishi Heavy Industries Regional Jet) expanded facility going up near the existing terminal.
Capito met with Benedum Airport Authority members, local officials from Harrison and surrounding counties, elected officials, and others. The discussion at the airport, she said, focused on how it is growing, the economic driver it is for the region, and the need to find workers to fill positions that will be coming in droves.
“We need more workers here,” she said. “… We have workforce shortages everywhere. It’s no different here at the airport.”
As for the airport, Capito is aware of the $1 billion-plus economic impact it has on the region – something many may be unaware of due to its thriving aviation and aerospace components. And she added that maintaining air service is critical for that impact to continue.
“You also have to look at preserving commercial air traffic … That’s important to maintain,” said Capito.
The airport saw a full flight of 50 passengers flying to Chicago through United Express as Capito spoke, which is the result of the FAA federally subsidized Essential Air Service (EAS) program. While that service ends Dec. 1, daily jet service to a major hub – Charlotte starting Dec. 1 – for connections will continue due to EAS. That subsidy is something she said is a constant battle in Congress and provided $5 million-plus to make the new Charlotte service possible.

“(EAS) helps (rural) airports like North Central to keep that service and maintain it … (EAS) is always under fire,” said Capito. “There are always airports in danger of losing their service. I’m always fighting for our West Virginia airports, North Central included, to preserve that service because if we don’t have that service, we’re not going to be able to grow businesses, we’re not going to be able to keep people here if they can’t have access to larger airports … You can’t understate it.”
Editor's Note: Top photo shows U.S. Senator Shelley Moore Capito addressing the media, while she covers over notes in the bottom photo as Benedum Airport Authority member and Harrison County Commission David Hinkle looks on.