Although it was after regular operating hours, had anyone showed up at the Meadowbrook Mall parking lot Sunday night and looked inside 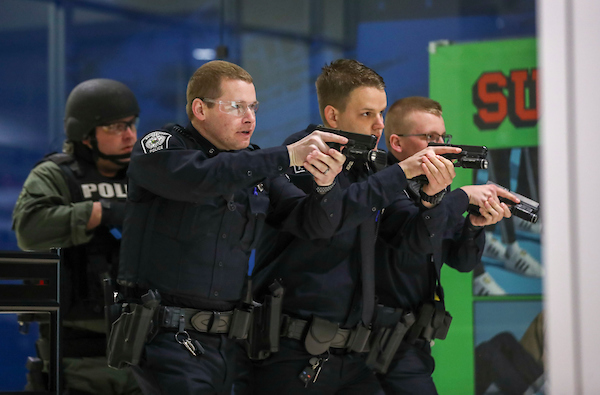 there likely would have been plenty of concern. After all, it’s not often you see dozens of police officers fully armed and in body armor.
That, however, was the scenario Sunday evening in Bridgeport. The good news was that it was nothing to be alarmed about as it was part of planned active shooter training exercise involving several area agencies.
The Bridgeport Police Department, the Bridgeport Fire Department and the Harrison County Sheriff’s Department all took part. Police Chief John Walker said there more than 30 individuals involved on the emergency response side.
“We probably had 15 of our officers, roughly 12 from the Sheriff’s Department and there were four SRT (Special Response Team) medics from the fire department 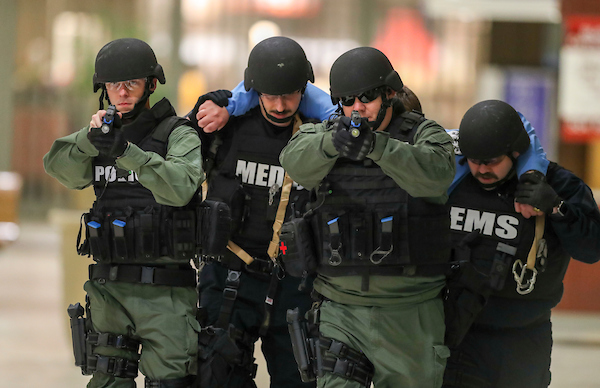 there,” said Walker. “It was pretty comprehensive.”
The training included businesses at the mall and individuals participating to make the situation as real as possible, including simulated gunfire. Walker said the training is critical and something he hopes his department never has to use.
“What we know is an active shooter situation can happen anywhere, which is the scenario we ran though in the event a situation evolved,” said Walker. “We wanted to see how to secure a building, retrieve injured individuals and find the bad guy or bad guys as the case may be.” 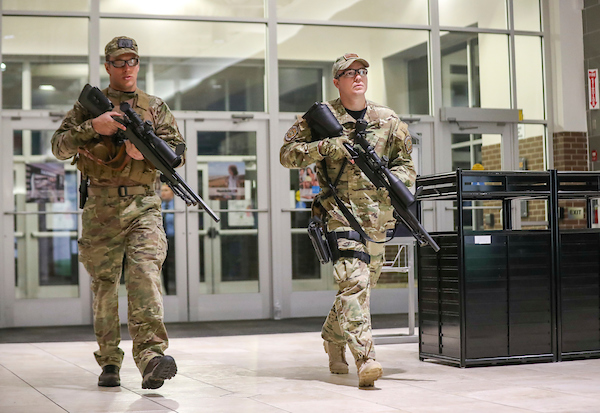 The training lasted roughly two hours on Sunday. It started shortly after the mall closed around 6:30 p.m.
“The training is very beneficial because it can identify weaknesses and issues where we may need additional training,” said Walker. “The more you train the more proficient you become in the event a situation takes place.”
Walker said the bulk of the Bridgeport Police officers involved were members of the city’s Special Response Team. He said five additional officers took part in the drills as well and that future drills will take place – perhaps back at the Meadowbrook Mall.
“We have a good partnership with the mall,” said Walker. “I believe this is the third time we’ve been there and it’s a benefit to us and it’s a benefit to them.”
Editor's Note: Photos shows some of the action from Sunday's Active Shooter drill at the Meadowbrook Mall. Photos from the event are by www.benqueenphotography.com.