On Tuesday, the largest single permit ever issued for a city-based project was issued. According to Bridgeport Community Development Director Andrea Kerr, a $38 million permit was issued to begin construction for the Bridgeport Indoor Sports and Recreation Complex.
Albert M. Higley Company out of Pittsburgh was the low bidder on the project when bids were opened May 10. The company was eventually approved by Council and work is set to begin. 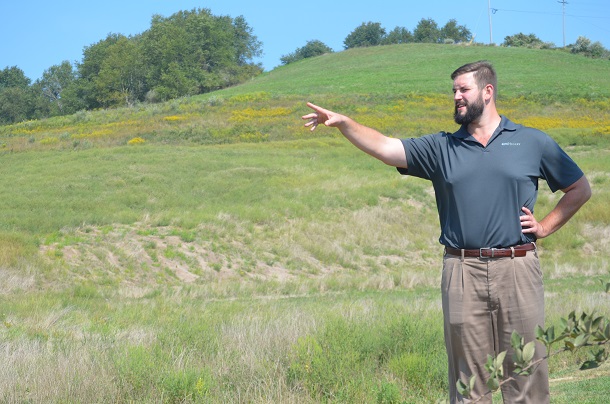 “This is huge and the biggest project in Bridgeport’s history on the municipal-owned front,” said Kerr. “We’ve been working non-stop for the last four or five years on this project and want to put out a superior product for our residents and patrons that we’ll be serving.”
Bridgeport has had bigger permits issues, including one well in the hundreds of millions for the still relatively new United Hospital Center. That, however, was not a city-owned project.
Shawn Glaser, a senior project engineer with Higley, was on site before noon this morning waiting for contractors to arrive. Workers with Orange Construction out of Morgantown would be doing the initial work.
“They’ll be doing brush hogging,” said Glaser. “They’re part of dozens and dozens of workers you’ll be seeing on this site.”
For those wondering if Highly has handled projects of this size before, the answer is yes. Glaser said he’s aware of projects in the $250 million range handled by Higley.
While that work is starting, the earth work is almost complete. Kerr said the work that’s taking place now is essentially a punch list and the eventual removing of equipment.
“They should not impact the start of the project,” said Kerr.
Editor's Note: Photo shows Shawn Glaser with Higley pointing to the area where brush hogging will be taking place starting this afternoon.

Excellent, he seems like he'll get the job done.