Almost a month after a demolition permit was acquired, a long-standing building in the City of Bridgeport saw the beginning of its end Wednesday.
Workers with Parotta Paving out of Morgantown began the demolition of the former Circle K building situated along Main Street and across 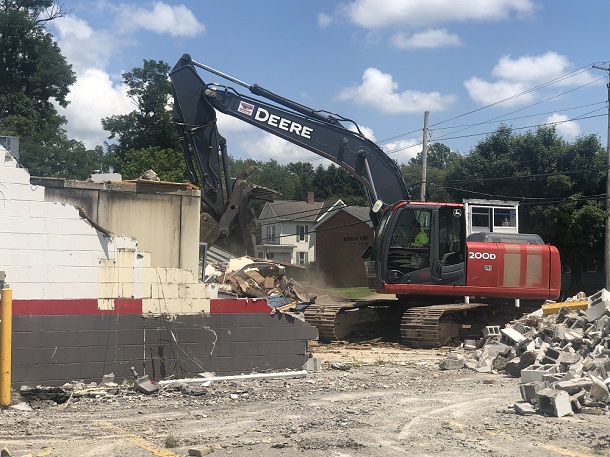 the road from All Saints Catholic Church. It’s part of a $20,000 demolition project that will pave the way for a new business.
The new business going in will be a BFS (Bruceton Farm Services) Convenience Store. Along with the items, there will be four credit card accessible gasoline pumps as part of the new layout.
Initially, officials with BFS had plans to simply renovate the former Circle K building. However, those plans changed and now an entirely new structure will be built on the lot and more to the back right of the property.
Garrett Bishop, BFS Chief Financial Officer, said the decision was made to go with a new building despite the old structure still being in sound condition. Bishop said the new building was determined to be the best and right thing to do at that Bridgeport location.
The new building will be up to 4,000 square feet in size. Although a final price determination hasn’t been placed on it, Bishop said it’s going to be safely into six figures. 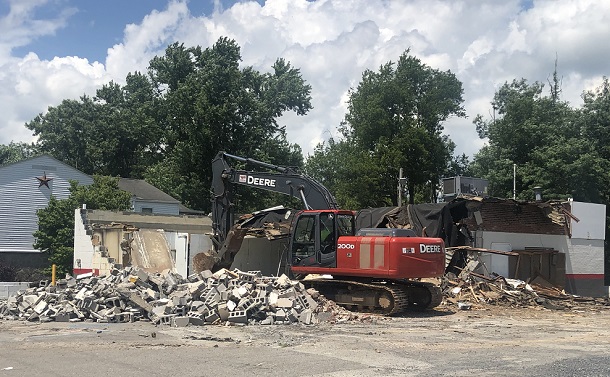 Bishop said last month he was hesitant to put a time frame for completion. He did say he expects the process with the city and contractor to be a smooth one and that BFS is still pushing for completion sometime during this calendar year.
In February, a lease was signed by BFS with property owner and city resident Rose Duke. The property has been in the family for decades with Circle K and prior to that a Dairy Mart that began operation in May of 1977. Before the Dairy Mart, the lot was home to Duke’s Pure Oil Station for decades.
Editor's Note: Photos show work being done on the demolition of Circle K's old building. Photos by Ben Queen of www.benqueenphotography.com.