Back on July 25, the Meadowbrook Mall had to shut down temporarily due to a water line break. Along with impacting the businesses at the mall, Bridgeport Public Works Director Tiny Grimes and City Engineer Beth Fox said the surrounding areas were also impacted for a short time.
Unlike most water line breaks, this one could have been, and according to city officials should have been avoided. 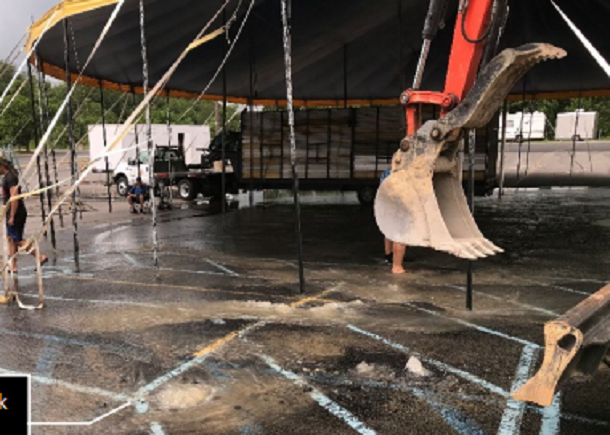 “The carnival that was in town for that week were putting up tents. While doing that, the carnival crew or their tent company drove a spike right into one of the main lines,” said Fox.
The line in question was a 12-inch line under the parking lot running behind the former Sears location at the Meadowbrook Mall. While many of the tent stakes went through the asphalt with no problem, one of them went into a coupling of the waterline that resulted in a substantial leak.
While it may seem like a harmless accident, Fox as well as City Manager Brian Newton pointed out that there is protocol that is required to be followed to greatly reduce or eliminate the possibility of it happening. The group putting in the stakes did not contact West Virginia 811, the state’s “Call Before you Dig” hotline. It is a requirement by West Virginia State Code.
The call, said Fox, is simple and once made all utility companies are notified. Utilities are then required to mark and locate their facilities within 48 hours (holidays and weekends are exceptions).
“That’s the reason it needs to be done,” said Fox. “You can choose not to do it and take the risk and sometimes the risk in you’re going to include debt because what ends up being damaged to utilities. To avoid this, all it would have taken was a call a couple of days prior.” 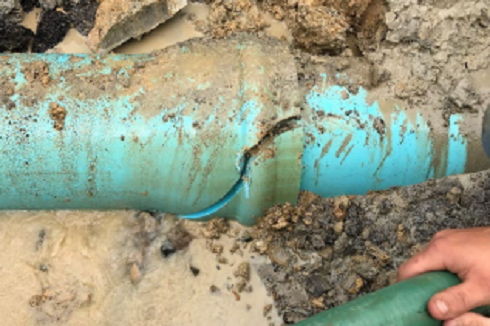 Fox said issues where water are sewer lines are problems, but usually result in inconvenience. She said hitting utilities such as gas and electric have potential to cause real problems.
“Those are the biggest concerns, but it’s all a concern,” said Fox.
Fox said city crews were on the scene for several hours. She, and Newton, said the city will be reimbursed for the cost. Newton said the cost was more than $6,000.
“There was an invoice sent to the mall who oversees the events there. They will pay it or pass it on to the vendor to pay for it or an insurance company will pay for it,” said Fox. “This is a cautionary tale of why you need to call. Not only is it a law, but it can be costly if you don’t.”
Editor's Note: Top photo shows water seeping out into the Meadowbrook Mall parking lot, while the bottom photo shows the damage caused by the tent spike to the 12-inch line.