A shoplifting incident at a Bridgeport convenience store has the city police hoping the public can assist them in locating the alleged suspects.
According to Officer K.M. Burgess, the incident took place last week – Wednesday August 7 – at the BFS located on State Route 131 near the Saltwell exit off of Interstate 79. The incident, according to video screen shots taken from surveillance, took place at 4:12 a.m. 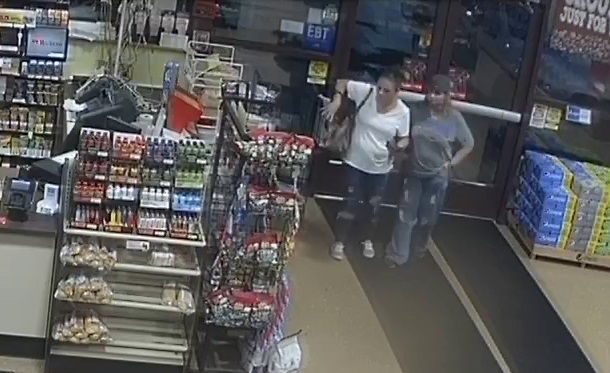 “One female is wearing a white t-shirt with blue jeans, while the other female is in a grey t-shirt with blue jeans and a blue WVU baseball cap on,” said Burgess.
Burgess was able to obtain several video screen shots once the store was able to supply the police department with video footage. The video gives a decent look at the suspects, but Burgess was unable to get another key piece of information.
“I was unable to get the registration of the vehicle from the video provided by the vehicle appears to be a black Subaru Outback or Crosstrek,” said Burgess. “Hopefully, anyone that sees the pictures may recognize the suspects or will recognize the vehicle.”
Burgess said roughly $92 in merchandise was stolen. Individually, the charges for shoplifting is a misdemeanor. However, if either person is located and charged with third offense shoplifting it is a felony.
If you have information or recognize those shown above or in the gallery below, call Burgess at 304-848-6121. He can also be reached via email at kburgess@bridgeportwv.com.