Although Class AA state champion took home the top awards for the all-Big 10 Conference team, Bridgeport didn’t get completely shut out. In the team that is voted on by the league’s coaches, the Indians’ Jake Bowen was named the offensive player of the year. 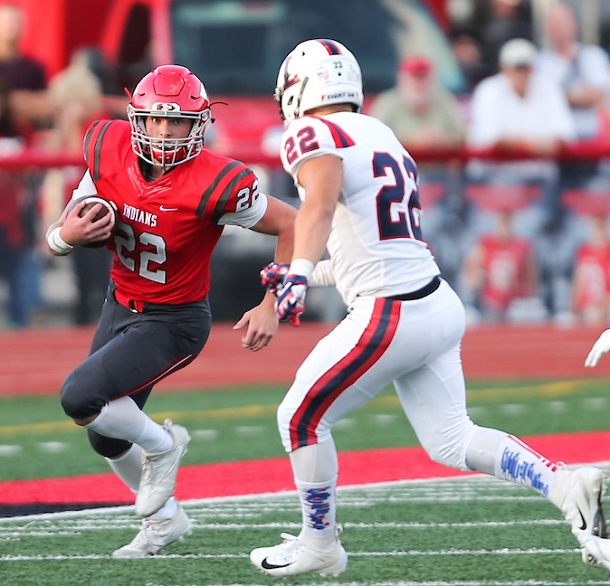 Bowen’s offensive exploits were impressive. He finished the year with 2,270 yards rushing on 285 carries and added 35 touchdowns.
The Tribe had five first team selections. The Indians had four members on the second team.
Taking home the top honor was Fairmont Senior quarterback Connor Neal who led the Polar Bears to the state championship this season. His coach, Nick Bartic, was named coach of the year, while FSHS lineman Zach Frazier was named one of two lineman of the year recipients.
Elkins’ Daniel Romans was named the defensive player of the year. Liberty’s Jaden Rollyson was the other lineman of the year.
For the Indians on the first team offensive unit, Cody Spring and Michael Watkins were selected as offensive linemen. D’Andre Holloway was chosen as a first team wide receiver.
On defense, BHS’s Austin Sponaugle earned a first team selection on the defensive line. He was joined by Trey Pancake as a linebacker.
On the second team offensive unit, Owen Henline and Devin Hill were chosen as offensive linemen. Defensively, Elijah Smith and Brian Henderson were chosen as defensive backs.
It should be noted that the individual award winners are not included at their position on the first or second team units.
Click HERE to see a list of all the selections.
Editor's Note: Photo of Jake Bowen by www.benqueenphotography.com.