It wasn’t a clean sweep, but the 2019 Frank Loria Awards Banquet held this evening at the Bridgeport Conference Center certainly had a very strong Bridgeport High School flavor. The Indians took home three of the four major awards, including the top overall honor at the event.
BHS senior Jake Bowen was named as the Loria Award Winner for the top high school football player in Harrison County. The award caps a season in which he was named first team Class AA All-State, first team All-Big 10 and first team All-Harrison County.
The Loria award is done in honor of arguably the best football player to ever come out of Harrison County and his life was once again 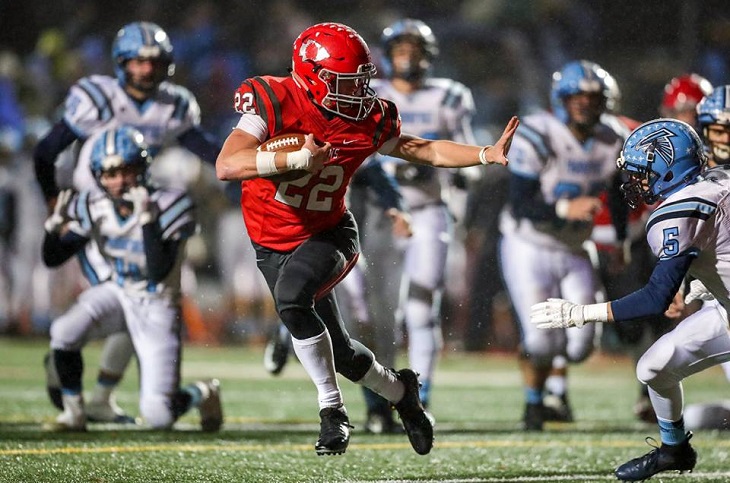 highlighted at the event put on by the Clarksburg Columbian Club.
The Loria Awards Banquet celebrates the high athletic and academic standards of Harrison County native Frank Loria – Virginia Tech University’s first All-American in 1966 and first Consensus All-American in 1967 including Academic All-American Honors. “Frankie Paul,” as he was known to his family and friends, went on to play professionally and eventually coached at Marshall University.
Loria died at the age of 23 in the tragic 1970 MU plane crash with nearly the entire football team. The banquet helps carry on his memory by recognizing young men in the sport in which Loria excelled.
Bowen certainly excelled for Bridgeport. The senior finished with 285 rushes for 2,270 yards in 13 games. He added 35 touchdowns for good measure that was the result of eight yards per carry and 174.6 yards rushing per game despite sitting out large portions of the second half of several contests.
“It’s an individual award for him, but Jake a team player and he’s the first to always thank his teammates,” said Cole. “He knows the rest of the team did what they needed to do to let Jake’s talents take over. No matter how you look at this, he’s very deserving of the honor.”
Not only did Bowen led the county in rushing, he ended his career as Bridgeport’s all-time leading rusher. He passed a total held by Steve 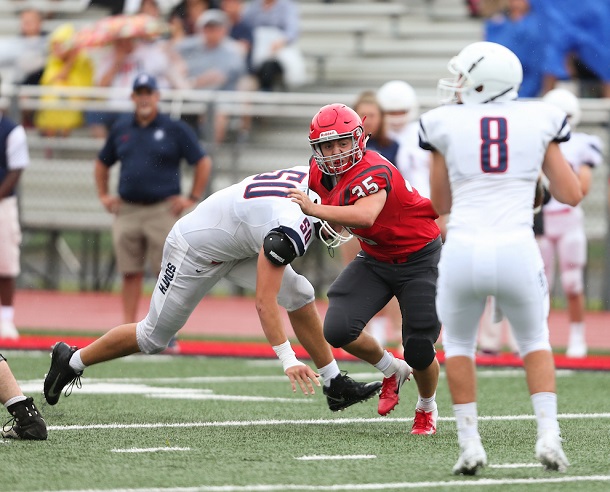 Stout since the end of the 1973 season.
“That’s impressive in itself and then to think that there were a whole lot of games during the last two years where he never carried the ball at all, or much in the second half, particularly his junior year,” said Cole. “The other thing that fits in nicely with his is that he’s 100 percent committed as an athlete in the weight room and in practice.
“He represented the work ethic I’ve always been told Frank Loria had,” continued Cole. “I’ve also heard Frank Loria led by example and Jake’s the exact same way. He didn’t need to get in people’s faces and yell, but he led by example and others noticed it.”
Bridgeport also took home the Academic Athlete of the Year Award. Austin Sponaugle, a senior who was also the Indians’ other Class AA all-state first team selection, landed the award for on-field and in-the-classroom success.
“I didn’t even realize, until after his junior year, that he was a 4.0 student. Hanging around him he doesn’t portray that bookworm mentality, but he takes challenging classes, AP classes, honors classes, science and high-level math classes and has done extremely well to set himself up for the future,” said Cole. “There’s not a bunch of electives with Austin. He earned this just like he earned his all-state honors, and that was with solid play.”
Sponaugle was chosen as a ‘AA’ all-state lineman. He created havoc from his defensive end position this year for the Tribe, while also blocking for Bowen as the lead blocker out of the backfield on most of his runs.
The talented Sponaugle was second on the team in tackles with 73. He had a team-high 9.5 tackles for loss as well as a sack and a fumble recovery. 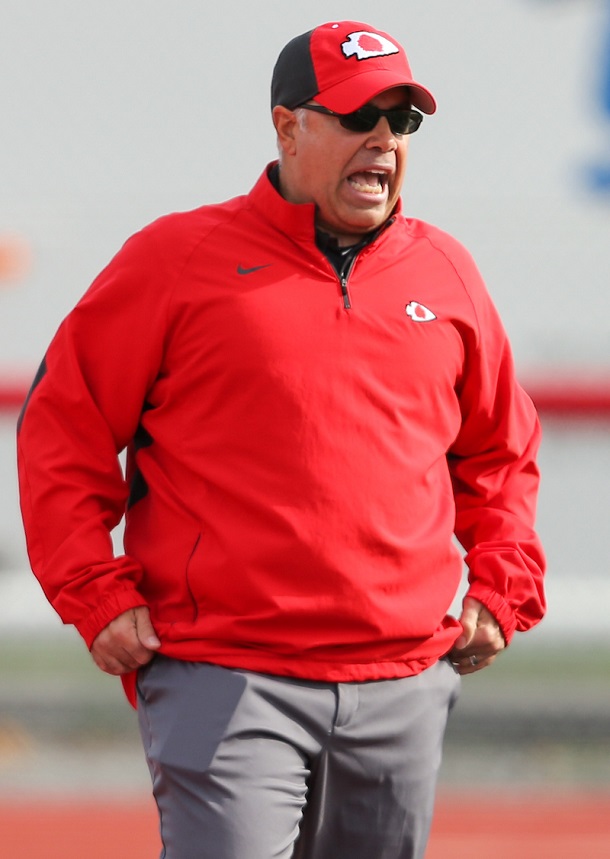 “He was just a force,” said Cole. “He wasn’t the fastest kid out there, but when you combine what he had with effort and smarts you didn’t have to worry about anything. This honor is perfect for him.”
Cole also was honored as the Loria Coach of the Year. The long-time assistant and still relatively new head coach once again had Bridgeport in the hunt for a Class AA state championship.
Thanks to Cole’s leadership, the Indians made it back to the Class AA semifinals for the third straight season. The Indians ended up losing a battle on the road in Bluefield the day after Thanksgiving. The Tribe finished the season at 11-2.
The other big honor went to Robert C. Byrd’s Robert Arnold. The all-stater was named the Loria banquet’s Lineman of the Year after helping pace one of the area’s top ground games with a potent one-two punch in the backfield.
Those individuals, along with the players listed below, heard from former Florida State University and West Virginia University assistant Coach Rick Trickett, who is currently at Glenville State. Trickett was part of a national championship winning staff with Clarksburg’s Jimbo Fisher while with the Seminoles.
The first team offensive and defensive units as chosen by The Exponent Telegram in a ballot of writers and coaches were all recognized this evening. The first team offense consists of Bridgeport’s Jake Bowen, D’Andre Holloway, Cody Spring, and Michael Watkins; Robert C. Byrd’s Ghovan Davidson, Brock Robey, Robert Arnold and Xavier Lopez; Notre Dame’s Sam Romano and Nate Helm; Lincoln’s Payton Hawkins; Liberty’s Seth Davis and Chance Howell; and South Harrison’s Landon McFadden.
The first team defensive selections being honored include Lincoln’s Hunter Moore and Colten Hovermale; Bridgeport’s Trey Pancake, Austin Sponaugle, Carson Winkie, and Evan Ogden; South Harrison’s Brent Barnette; Notre Dame’s Brock Harlow and Pat Snuffer; Robert C. Byrd’s Jaden Marino, Andrew Sponaugle, and Jeremiah King; Liberty’s Jaden Rollyson and Seth McIntyre.
Editor's Note: Top photo is of Jake Bowne, while Austin Sponaugle is shownin the second photo. Below is BHS Coach John Cole. Photos by www.benqueenphotography.com.