The week after Governor Jim Justice announced prep and middle school sports governed by the WVSSAC would soon be starting up summer programs, Bridgeport High School Athletic Director and Assistant Principal Mark Jones discussed requirements to get started.
On Monday, June 8, Jones aid offseason conditioning for all sports that wish to participate can do just that – with specific guidelines. Along with following the guidelines released last week by the WVSSAC (click HERE for those), Jones said participants will need something else. 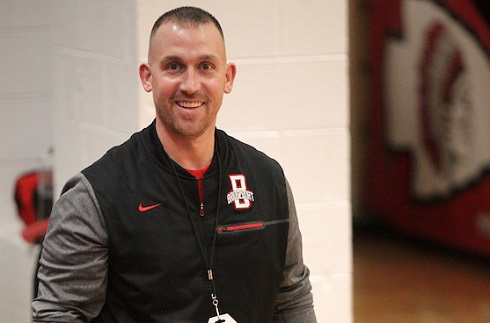 “Students will be required to have a physical prior to attending offseason conditioning,” said Jones. “They will have to turn in a physician-signed form to their coach and it will also need the signature of the parent or guardian and student.”
Forms, said Jones, can be obtained off the WVSSAC Web site. Individuals can click HERE for the form.
“We’re going to follow the guidelines of the WVSSAC along with those set forth by the office of the Harrison County Board of Education,” said Jones. “Everyone wants to make sure all the schools in the county are on the same page.”
Jones said the decision to have the physical forms was part of a meeting involving administrators and athletics directors from Harrison County at the prep and middle school levels Monday. The meeting was held via Zoom.
The same physical form will be needed for the three-week summer practice period that some sports participate in. The practice period starts July 6, said Jones. The same physical form is good for the entire 2020-21 school year.
“We’re expecting coaches to be in contact with their athletes as well,” said Jones. “Dates and times for conditioning are still being determined.”
Jones said he believes there will be plenty to participate in the condition. He said it should be the result of getting “some level of normalcy” that many of the students are used to.