Bridgeport Moves to 7-1 by Dominating all Phases of Contest in 49-14 Big 10 Conference Win vs. Elkins

Things started out bad for Elkins in its game with Bridgeport Friday night in high school football. And they just never got better.
The Indians dominated early and often on their way to a 49-14 win against the Tigers at Wimer Field. The win moves Bridgeport to 7-1 on the year, while EHS fell to 2-5. 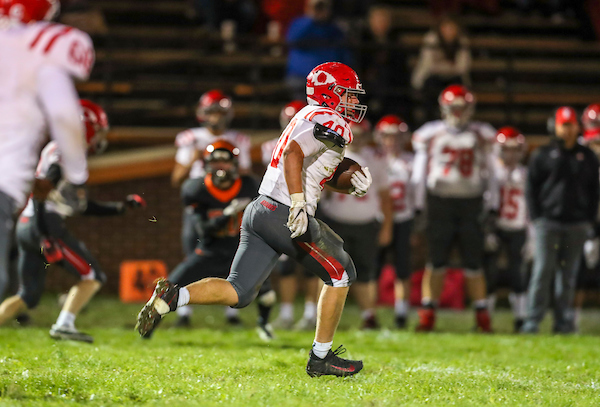 The game was never in doubt from start to finish. And in this game, the statistics as well as the final score told the entire story.
By night’s end, Elkins had managed just 77 yards of offense. Of that total, 22 came against Bridgeport’s first team defense.
For the Tribe, they managed to once again top the 300-yard plateau rushing. The Indians finished with 331 yards rushing as part of their 343 yards of total offense.
Trey Pancake had a career-high 125 yards rushing on just seven carries. He also added one touchdown in a game that was all Bridgeport – literally – from the game’s first play
Bridgeport led 14-0 before it ever ran a play from scrimmage thanks to a pair of special team touchdowns in the game’s earliest stages. In fact, the Indians scored on the game’s opening play. 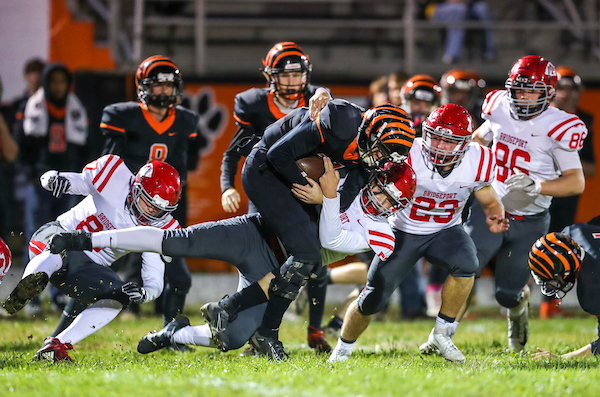 The Tribe’s Devin Vandergrift took the game’s opening kickoff, hauled it in at the 35 and was off. The senior sprinted past the Tigers’ defense for a 65-yard kickoff return and an early lead. The first of four successful first-half point-after kicks by Austin Springer made it 7-0 with 11:47 still showing on the play clock.
When Elkins looking to do something positive on its first possession, things couldn’t have gone worse. Bridgeport quickly forced the Tigers into a punting situation and the snap went over the punter’s head. The loose ball battle in the end zone was won by Bridgeport’s Josh Wojciechowicz for a touchdown and what turned into a 14-0 lead with 10 minutes left in the first quarter.
Bridgeport wasn’t finished in the opening quarter. On its next possession, BHS put together an 8-play, 87-yard drive that ended with Carson Winkie busting in from four yards out with 30 seconds to go to help put the Tribe up 21-0. 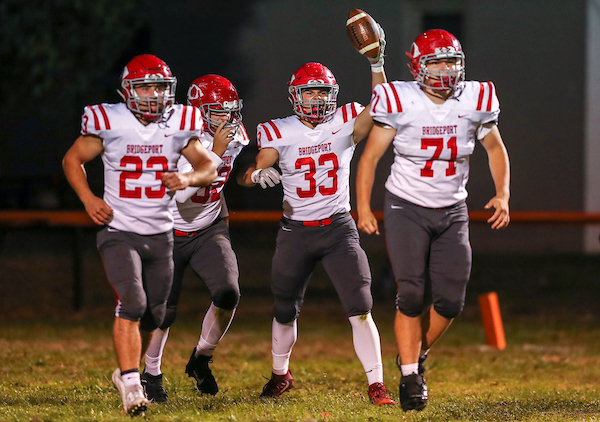 The second quarter only proved to be slightly better. However, the Tigers still managed to allow two more touchdowns and be down 35-0 at the intermission.
Bridgeport scored on its first drive of the second quarter. A nine-play drive that started near midfield ended when Vandergrift used his arm to connect with Wojciechowicz for a 12-yard pass that Wojciechowicz high-pointed to bring it down for six and what would turn into a 28-0 advantage.
The four-score advantage looked to be what would stand at the half, but a turnover by the Tigers late in the second would open the door for more BHS offense. After taking over on EHS’s 34, Bridgeport would see Cameron Cole score three plays later from 20 yards out with 51 seconds for the final points of the half at 35-0.
The first half was domination in all three phases of the game by Bridgeport. Elkins managed just 12 yards of offense, had two turnovers 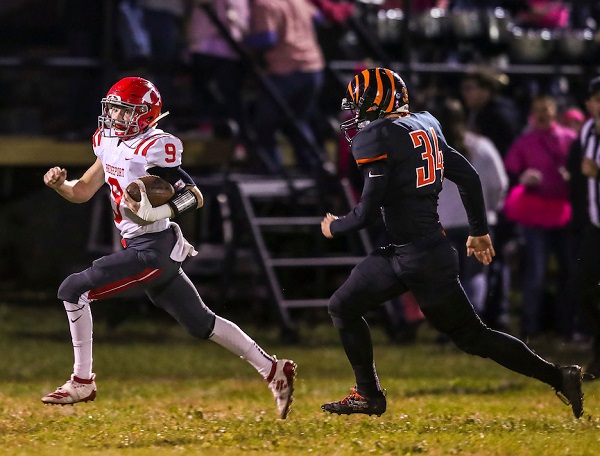 and also snapped the ball over the head of the punter.
Bridgeport finished with 179 yards of first half offense with 167 coming on the ground. Trey Pancake led the rushing attack with 73 yards on just four carries, while Cole added 60 yards on eight runs.
The Indians wasted little time getting things going in the second half. Bridgeport’s first offensive possession resulted in a seven-play, 51-yard drive that ended when Pancake rambled in from 37 yards out at the 8:11 mark of the third for a 42-0 score.
Elkins did answer back immediately. The Tigers took the ensuing kickoff and Blake Harris rambled 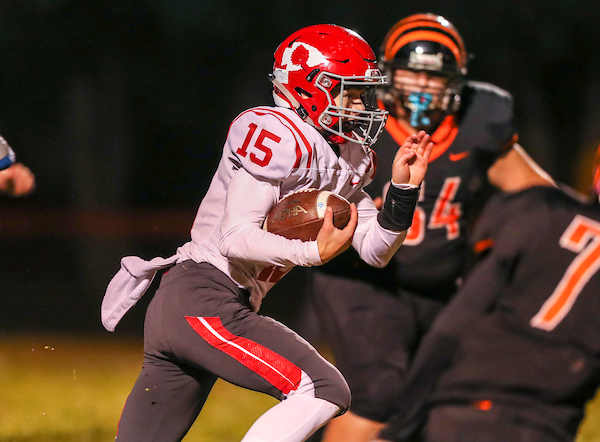 86 yards to make it 35-6 with 7:55 to go in the third after the conversion pass failed.
The score didn’t phase the Tribe. The next possession also covered seven plays and this one for 51 yards that ended J.D. Love barreled in from a yard out at the five minutes left in the third. Springer’s point-after kick made it 49-6 and that would be it for the BHS offense.
Elkins did tack on another score in the third with the Tribe’s reserves in the game. Quarterback Rodney Vandevender scored from 14 out and Ben Boggs ran in the conversion to make it 49-14 at the 1:47 mark of the third. That would be the game’s final points.
The win sets up a huge Class AA showdown next week at Wayne Jamison Field. The No. 4-ranked Indians will face No. 2 Keyser on Friday in what will have huge postseason implications.
The game starts at 7 p.m.
Editor's Note: Top photo shows Trey Pancake breaking loose for part of his career rushing night, while the second photo shows the Bridgeport defense smothering the Tigers' attack. Josh Wojciechowicz is shown in the third photo after pouncing on a loose ball in the end zone for six early in the game. In the fourth photo Devin Vandergrift breaks free on the game's opening kickoff for a score, while quarterback Cameron Cole is shown making on of several big runs in the game. Photos by www.benqueenphotography.com.