In a battle of two talented Class AA top 10 teams, there were a few things separating Bridgeport from North Marion this evening in Rachel. The biggest was the Indians had Carson Winkie and the Huskies did not.
Behind a career rushing effort by Winkie, the No. 6 Tribe managed to take a 35-20 win against No. 8 NMHS on the road.
The win moved Bridgeport to 5-1 on the year and marked the 52nd straight season the Indians have secured a non-losing campaign. North Marion falls to 4-2. 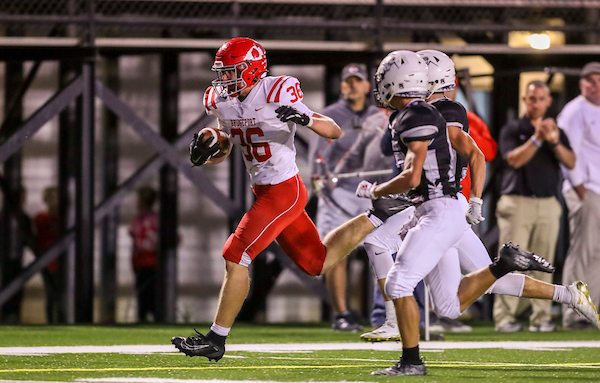 Just how dominant was Winkie?
By night’s end, he ran the ball 34 times for 246 yards and a pair of touchdowns. Both totals were career highs.
“Winkie’s been there all year,” said Bridgeport Coach John Cole. “He’s got a lot of time in weightlifting and effort invested in what he’s doing.”
The investment paid off. Despite smashing his career highs in rushing and attempts, the senior was still churning up yardage late in the game.
“We’ve had guys like that, but Carson wants to win, and he likes to work. There were times in the offseason he would ask me if we could get to the hill or if we could do more than what I had planned, said Cole. “The conditioning drills most of the kids don’t like, he wants … That’s the kind of kid he is.”
No where was that work ethic bigger than during the final two scoring drives of the second half by Bridgeport. The first of those scoring drives came 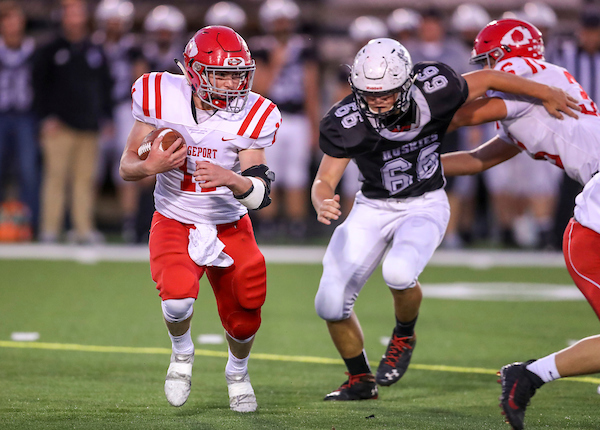 after North Marion had managed to cut the score to 21-20 in the third quarter.
With the game’s outcome in doubt, the Indians turned to Winkie. And the big senior delivered.
He carried the ball eight times on a 14-play, 80-yard-drive that crossed between the third and fourth quarters. Winkie capped the drive with a two-yard touchdown run up the gut at the 8:44 mark. The fourth of five successful point-after kicks by Austin Springer put Bridgeport in front 28-20.
North Marion followed the score with another drive into Bridgeport territory. However, after getting to the BHS 29, the drive fizzled and then concluded on an incomplete pass on fourth down.
Bridgeport then took possession of the ball and, eventually, possession of the game. And once again they rode the legs of Winkie.
A nine-play, 71-yard drive saw Winkie carry the ball eight straight times all the way to the North Marion 10. There, on first-and-goal, a bootleg to the left by Devin Vandergrift resulted in a touchdown and what would end up leading to the game’s final score with 6:57 to play.
Winkie helped Bridgeport finish with a season-high 369 yards rushing. For the game, Bridgeport had 383 yards of total offense. 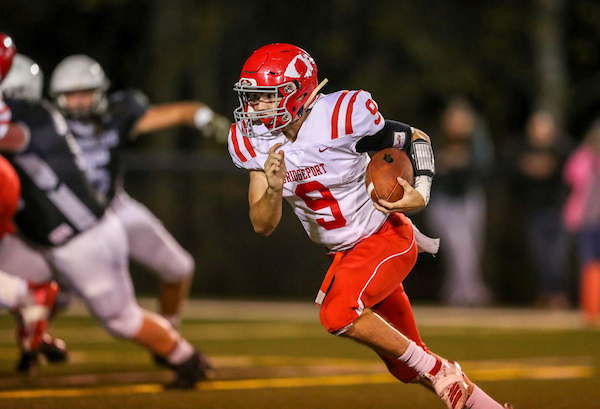 While Cole praised Winkie, he also praised the offensive line and other blockers for opening holes.
“Let’s give credit to the line. (North Marion) had a nine-man box (on defense) and we pounded mainly the middle of that nine-man box,” said Cole. “… The guys up front and his blocking backs paved the way and then he did the rest.”
The blocking would be needed after North Marion made things a little too uncomfortable for Bridgeport at the start of the second half. Down a touchdown, the Huskies took the opening drive starting at their own 40 and needed eight plays to cover the 60 yards and get into the end zone.
Three big double-digit yardage pass plays were the difference during the surge. However, it was Ricky Newbrough capping the drive with a six-yard touchdown run at the 8:43 mark of the third.
It appeared the game was set to be tied, but the point-after attempt went awry. The result was a failed conversion that left Bridgeport up 21-20. 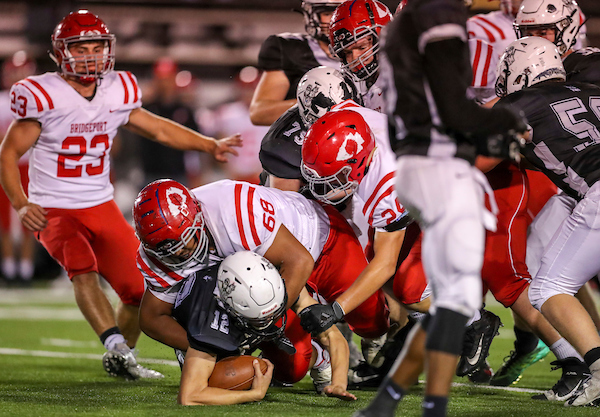 North Marion would not score again. The Huskies would finish with 271 yards of offense with 227 of it coming through the air courtesy of Gunner Murphy.
“That quarterback didn’t make many mistakes,” said Cole of Murphy.
Murphy accounted for all the passing yardage. He was 16-of-31 for 227 yards with one touchdown and two interceptions. The final interception came courtesy of Trey Pancake late and squashed any remaining hopes of a North Marion comeback.
Bridgeport started the game like it was going to blow out the Huskies. In fact, they were up two scores after stalling early in the contest.
After getting stopped on fourth down on their first drive, the Bridgeport defense helped get the Indians a quick second series. On North Marion’s third play from scrimmage, JT Muller came through untouched and hit Murphy just as he was throwing.
The result was the ball going up in the air and Winkie hauling it in and returning it to the North Marion 40. And it wouldn't take long for the Tribe to cash in. 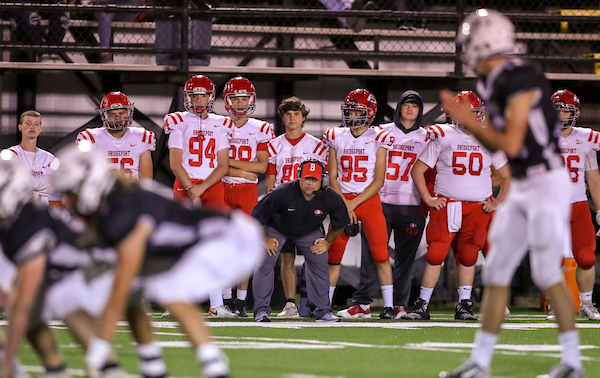 BHS used six plays – all on the ground – to cover the final 40 yards and get six. Brian Henderson did the honors with a one-yard scoring run for the game’s first points. Springer’s first point-after kick made it 7-0 at the 8:48 mark for the first.
The Indians wasted little time in adding to their advantage after forcing a quick three-and-out. Starting at their own 42, the Tribe seemed to sputter near midfield and faced yet another fourth-and-two play. This time, from the 50, the decision to go for it paid off.
Winkie did the honors by not only getting the first down, but by rambling 45 yards to the NMHS five. Two plays later, Winkie busted in from one yard out and the score, following another successful PAT, was 14-0 Indians with 1:19 in the first. 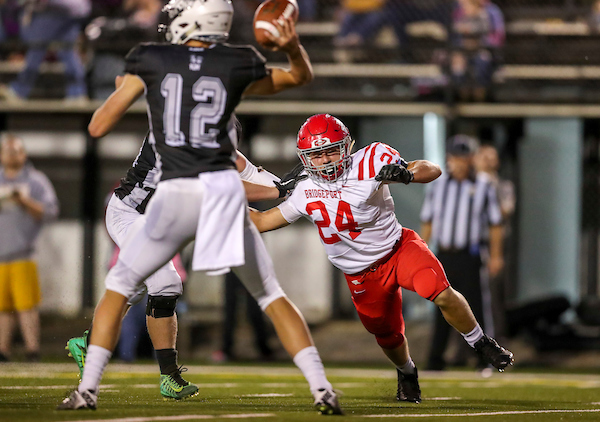 Despite the back-to-back scores, North Marion didn’t wilt. Instead, the Huskies went on the attack and gambled to make it pay off.
NMHS started at its own 26 and appeared dead in the water facing a fourth-and-two from its own 35. However, Coach Daran Hays opted to roll the dice and go for it – and it worked. A five-yard pass play kept the drive alive and, suddenly, the dormant Husky offense came alive.
Mixing the pass and the run, the Huskies sliced through Bridgeport’s defense to get in position to score.  On first-and-goal from the 10, Murphy faked the handoff and hit a wide-open Tyler Thorne over the middle who plowed through the defense the final two yards for six.
Malachi Funkhouser’s point-after kick was good to give the Huskies their seventh point. With 9:27 left in the first half, BHS saw its lead cut to 14-7.
It was after this that the Indians delivered one of their patented clock and momentum killing drives. Starting at the 30, Bridgeport used 13 plays to cover 70 yards and get back into the end zone.
The big play on the surge was a six-yard screen pass that saw Pancake make a nice reception of a Vandergrift pass on a fourth-and-five play at the North Marion 38. Seven plays later, Vandergrift would keep it on a bootleg from six yards out for six points. The 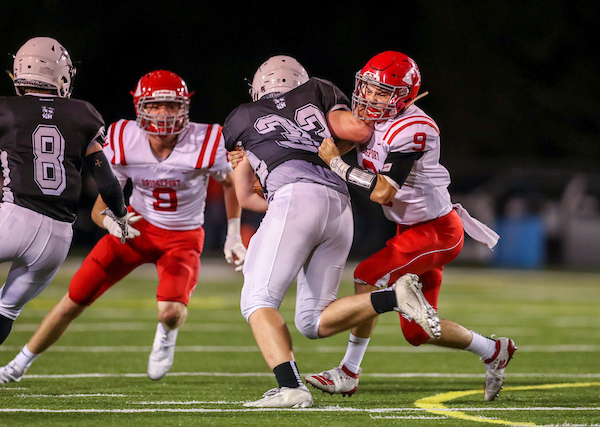 point-after made it 21-7 with 2:16 to play before halftime.
It appeared that would be the worst-case scenario for the Tribe on the scoreboard as the visitors forced a quick three-and-out and got the ball back. However, on Bridgeport’s second play on the drive in question the ball popped loose from the running back and the Huskies pounced on it.
North Marion got the ball at the Bridgeport 38 and wasted little time in making the Indians pay for the miscue. On the first play, Murphy stepped up in the pocket and delivered a dart to Tariq Miller down the left sideline where he caught it in the end zone. Following another Funkhouser kick, it was 21-14 Bridgeport with 1:13 left in the second quarter.
“That fumble was not good. We knew they were going to take a shot and we had two guys there, but just didn’t make the play,” said Cole 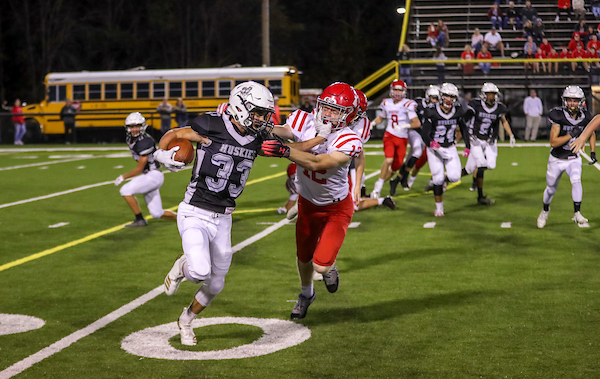 on the touchdown pass. “We keep the ball there and we’re up two scores at halftime and in a little better position.”
Statistically, Bridgeport had the edge in the first half. The Indians finished with 208 yards of offense with 194 of it coming on the ground. Winkie led the way with 128 yards on 15 carries.
The Huskies had 130 yards of offense. Of that total, Murphy produced 109 yards by going 9-of-15 through the air.
“We’re ecstatic because we knew this was gong to be a tough game,” said Cole. “Our players played really hard; they really did. North Marion is a good team. Coach Hays and his staff do a great job and his players do a great job. We knew it going to tough.”
BHS will return to action next Friday as it hosts Preston in a homecoming affair. North Marion will again be home as it hosts Lewis County.
Kickoff is 7 p.m. for both of those games.
Editor's Note: Top photo shows Carson Winkie breaking off a 45-yard run on a fourth down play, while Brian Henderson is shown making a run in the second photo. In the third picture, Devin Vandergrift bootlegs for a first half touchdown run and that photo is followed by Devin Hill bringing down a North Marion player. In the fifth photo, Coach John Cole takes in the action from the sidelines, while J.D. Loves looks to put pressure on North Marion quarterback Gunner Murphy in the sixth picture. Vandergrift and Hayden Moore (8), look to make a stop in the next photo. In the bottom photo, Sam Romano makes a play on North's Ethan Raines. Photos by www.benqueenphotography.com.