In the quarterfinals, it was the highly touted Mingo Central Miners and the Hatfield brothers at wide receiver that drew the attention of Bridgeport. This week, it’s a whole new animal with a lot of similar characteristics.
All of it will play out Saturday afternoon as Bridgeport will battle undefeated and 12-0 Oak Glen at Wayne Jamison Field. Kickoff is set for 1:30 p.m. The winner heads to Wheeling Island Stadium next Friday to face the winner of tonight's Bluefield game at Fairmont Senior at 7:30 p.m.
“Last time I told you I was worried about the wide receivers because I wasn’t sure if there was a tandem as good as well as a quarterback that we’ve faced like that in a long time. This week, it’s the Patterson brothers and another quarterback that’s got our attention,” said BHS 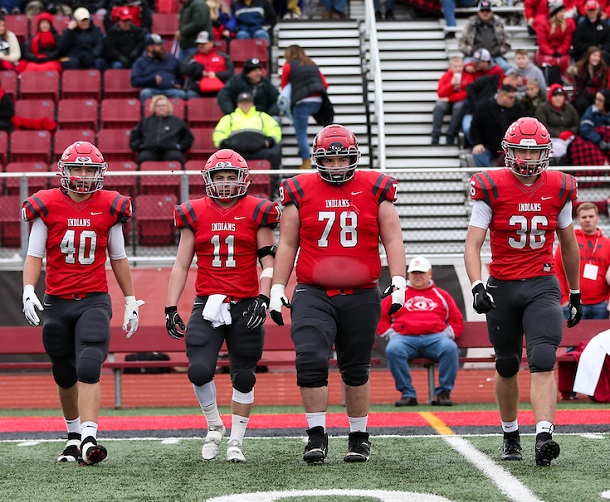 Coach John Cole. “It’s a different look offensively in a lot of ways, but it’s a lot of pass and attack.
The receivers in question are juniors Hunter and Gage Patterson. Hunter Patterson, who lines up in the backfield, has 45 catches this year for 829 yards with nine touchdowns. Gage Patterson has 33 receptions for 617 yards and nine scores as well
The Golden Bears also employ the services of senior Zach Taylor. Taylor has caught the ball 27 times for 592 yards with six scores.
Oak Glen will also run the ball. And it is usually Hunter Patterson doing the honors. He’s carried the ball 116 times for 1,239 yards (10.7 yards per carry).
“They’re a little different than Mingo. They get into more pronounced running formations. Mingo ran out of the spread, and Oak Glen will too, but they’ve got a little bit of a wing-T effect to it,” said Cole. 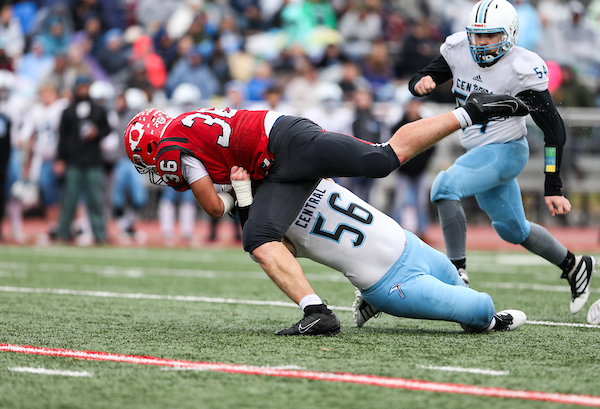 Cole said Oak Glen will spread the field. He said the team will utilize sweeps to the weakside of the field in the wing-T type sets. And he said no matter what set they’re in, it’s junior quarterback Nicholas Chaney that makes everything work.
“He has a good arm and he utilizes it,” said Cole.
Chaney has completed 118-of-199 passes this year for 2155 yards. He has 22 touchdown passes against 11 interceptions.
“We’re going to play our game against the defensively. We have to be physical and not make mental mistakes,” said Cole.
Defensively, that means a whole lot of Carson Winkie. Winkie leads the team with 79 tackles this season but has plenty of help – mainly in the form of Trey Pancake. Pancake, a three-year starter, has 56 stops this year.
After that, the Indians have Devin Vandergrift with 45 tackles, JT Muller with 43, Hayden Moore and Landyn Reppert with 41 and Michael 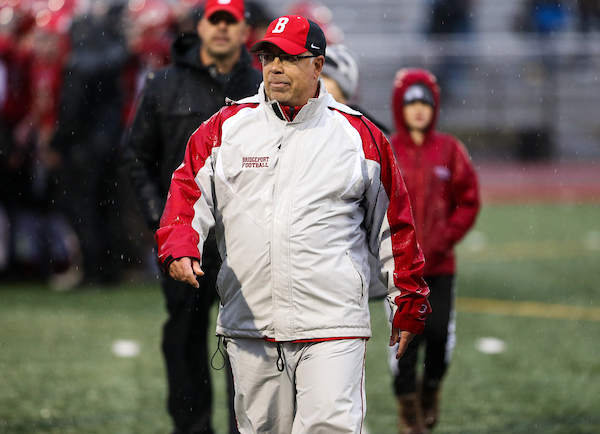 Watkins with 40. BHS will use its standard defense.
“We won’t be changing anything,” said Cole.
Defensively for Oak Glen, the Golden Bears run out of a 3-3-5 odd stack. Cole said the look to get up the field and disrupt your offense.
Senior linebacker Preston Brown looks to do the damage. He leads the team with 105 tackles this year and gets help from fellow senior Conner Adams with 87 stops and senior safety Mike Lemley with 88.
The entire OGHS defense will be looking to stop a Bridgeport team that is determined to run the ball. In fact, in last week’s 28-8 quarterfinal win against Mingo Central Bridgeport didn’t attempt a pass.
In recent weeks, Winkie has been the workhorse in the backfield. He crossed the 100-yard barrier last week and now has 743 yards on 134 carries (5.5 yards per carry) with a team-high 13 touchdowns.
Brian Henderson has 662 yards this year with 9 scores (5.7 yards per carry). Pancake is right behind with 660 yards on 94 carries (7 yards per carry) and seven touchdowns. Vandergrift is also emerging as a big threat at quarterback to run and now has 457 yards on 37 carries (81 yards per carry) and nine touchdowns. 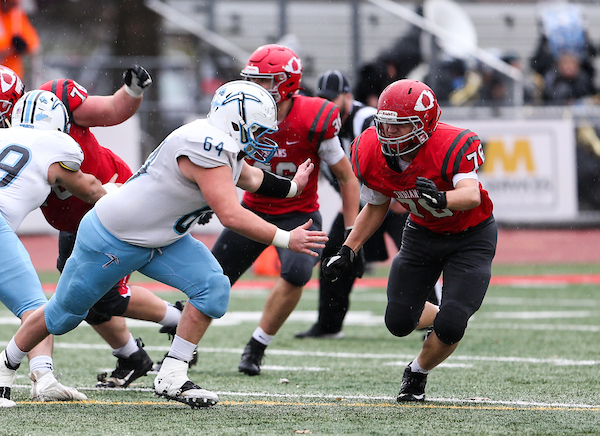 “Hopefully, if we can find an advantage it will be on the line both ways. Certainly, on offense it will help us out and on defense a little bit even though they try to beat you on the edge,” said Cole.
Oak Glen comes into the game ranked sixth in the state with its perfect record. Cole said they probably are coming in with a chip on their shoulder.
“They’ve probably been told they’re not as good as their record indicates. Let me assure you that the film says they’re that good,” said Cole. “You don’t travel from Hancock County, go to Poca and beat a really good team in the rain without being pretty darn good. What they did last week alone isn’t easy to do.”
As for the team, Cole said except for Elijah Smith who was lost earlier this year due to a knee injury, everyone – include JT muller and J.D. Love – should be available.
This marks the ninth-straight year the Indians have made to semifinals in either Class AA or Class AAA. Next year, the Indians will have to try to advance as the smallest Class AAA program in West Virginia.
The game will once again be aired live on WAJR 103.3 FM. Travis Jones, “The Voice of the Indians,” will have the call and Chris George will provide color commentary.