For Second Time this Year, Tribe Proves too Much for Lewis County in 56-15 'AA' First Round Playoff Win

The opening round of the 2019 Class AA football playoffs couldn’t have started any better for Bridgeport. For Lewis County, things probably couldn’t have gone worse.
BHS exploded in the first half and rolled to a 56-15 win against the Minutemen in the opening round of action at Wayne Jamison Field this evening.
The win moves No. 2 Bridgeport, now 10-1, into the second round where it will face Mingo Central, a 13-7 winner against Shady Spring, next week. Game time will be determined Sunday in Parkersburg. 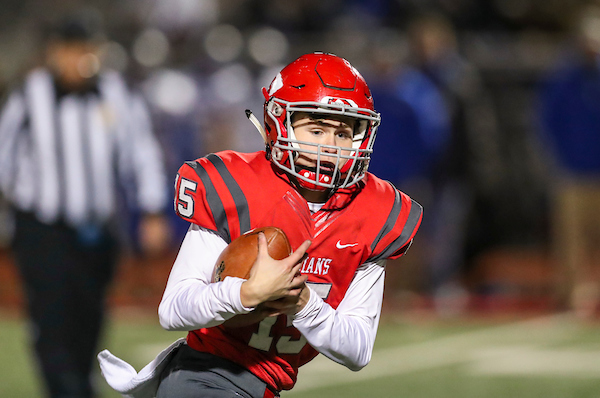 The No. 15-ranked Minutemen ended a solid season at 7-4. Two of the losses came to BHS.
“It was a good hard-hitting game and that was what we needed to do,” said Bridgeport Coach John Cole.
Most of the hard-hitting was delivered by the Tribe. The Indians shut down Lewis in the critical first half and ended up yielding 243 yards of offense for the game. Nearly 200 of those yards came against Bridgeport’s reserves in the final two periods.
Offensively, Bridgeport produced its highest offensive totals of the year. The team had 497 yards of offense with 445 yards coming on the ground.
Brian Henderson led the way with four carries for 114 yards, including two long second half touchdown runs. Carson Winkie, who didn’t carry the ball in the second half finished with 99 yards on 13 carries and two scores. Devin Vandergrift rounded out the leaders with 81 yards rushing on just five carries and a score. 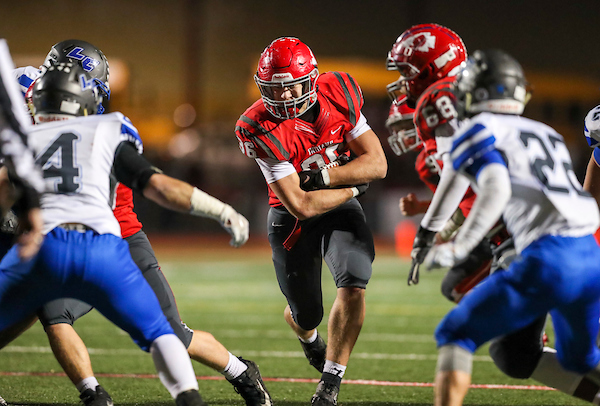 Tonight’s game was a rematch of the regular season opener where Bridgeport grinded out a 28-0 win. There would be no grinding, except perhaps by the teeth of those on the Lewis sideline, in this contest as the first half unfolded.
Bridgeport would put this game on ice early. In fact, it was essentially over at the half.
The first drive looked all too familiar to the Minutemen who yielded four long drives in their season-opening loss to the Tribe. After a good punt set the Indians up at their own seven, BHS went to work.
Using the legs of Winkie sprinkled in with a 30-yard pass from Vandergrift to Josh Wojciechowicz to help go the distance. The Indians would need 10 plays cover 93 yards with Winkie finishing things off with a one yard  run with 3:04 showing in the first quarter. 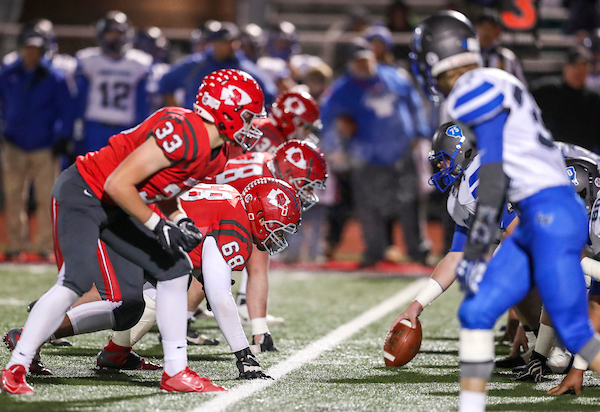 Springer’s point-after kick made it 7-0. It was the first of eight successful kicks by Springer in the game.
Bridgeport’s second score wouldn’t need to cover nearly as much yardage. A failed fake punt by the Minutemen, stopped by J.D. Love, set the Tribe up with excellent field position at their foe’s 46-yard line.
“You always warn your kids about that. Coach (Sean) Snider worked on that this week,” said Cole of the fake punt. “We told the kids it’s the playoffs and teams don’t have much to love if they fall behind because they need to make something happen. That was a huge play.”
Six plays later, the Indians were the end zone. Love finished off what he started with a three-yard scoring run. The kick made it 14-0 at the 10:46 mark of the second quarter.
Following a quick three-and-out forced by the Indians’ defense, the offense went back to work. And the work would be quick. 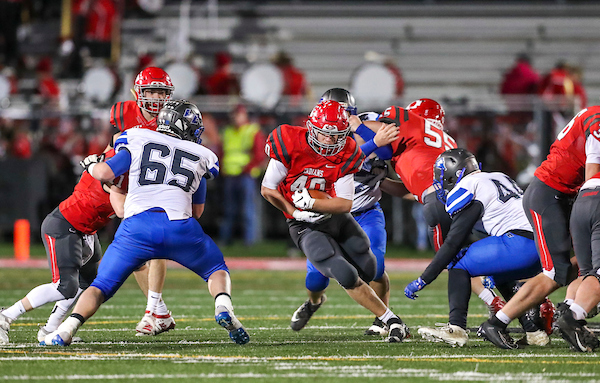 Bridgeport started what would be a seven-play, 64-yard drive that saw BHS face its only third down in the opening half. Winkie would get his second score again as he busted through for a two-yard run at the 5:30 mark to help BHS go up 21-0.
For those thinking the worst was over on the Lewis sidelines, it was about to get worse. And it was Cameron Cole who added to the misery.
Cole jumped a passing route at the Lewis 25-yard line and picked the pass clean. Cole went untouched the distance for a pick-six and what would turn into a 28-0 lead with 4:20 showing on the clock.
And on the next possession, Cole decided one interception and score wasn’t enough. Off a deflected pass in the secondary, Cole hauled 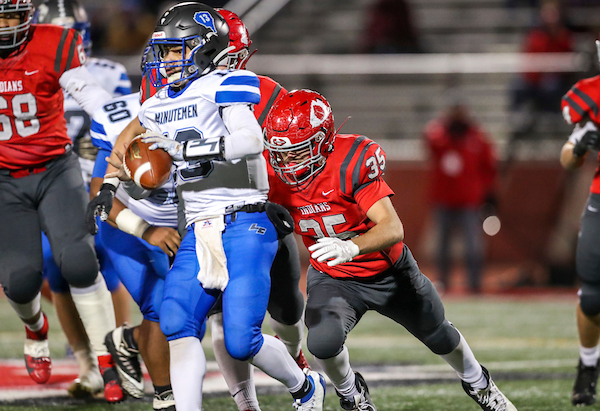 it in and raced 30 yards for a second straight score to make it 35-0 following the point after with 3:19 left in the second quarter.
“I was really, really proud of the defense,” said Cole. “We haven’t made many plays in the secondary with picks like that. Cam Cole was in the right spot at the time. He can do that. He’s a pretty good athlete.”
Again, things weren’t as bad as they could be for Lewis County. Bridgeport attempted an onside kick that proved successful as Gabe Ross pounced on it at the LCHS 46.
Immediately, the Indians capitalized. Vandergrift kept the ball, took off to the right and then cut hard to the left after clearing the initial wave of defenders and raced the entire 46 yards for the score. The point-after made it 42-0 with 3:06 in the first half.
“That’s a senior and a two-year player that’s started,” said Cole of a Vandergrift. “It’s time for him to shine.”
Bridgeport finished with 243 yards of offense that included 191 yards on the ground and 52 through the air. Winkie led the way with 13 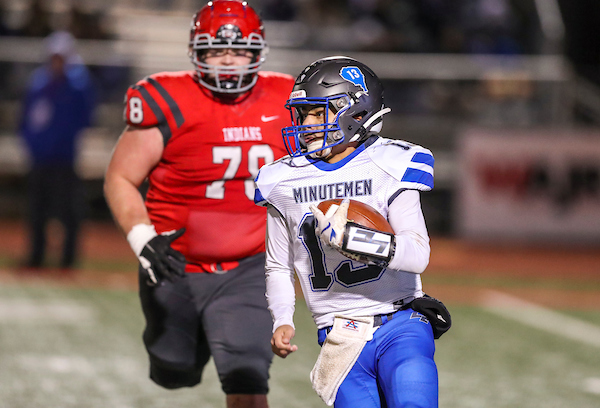 carries for 99 yards. Vandergrift added 81 yards on five carries along with completing both of his passes for 52 yards.
“(Winkie) did a good job,” said Cole. “He’s that kind of kid.”
Lewis County had just 55 yards of offense. The total included 33 yards of rushing and 22 yards passing.
Bridgeport started the second half in roughly the same fashion as the first half. The only difference was Brian Henderson moved from upback to tailback and Winkie moved from tailback to upback.
The result, on the only drive seeing the starters, was the same. Following a 36-yard run by Trey Pancake, Henderson would close out a quick, four-play, 74-yard drive with a 35-yard run for six. Springer’s PAT made it 49-0 at the 10:20 mark.
When BHS put in its second string on defense, Lewis County pounced. Marshall Hobbs did the scoring honors with a 45-yard run for six. 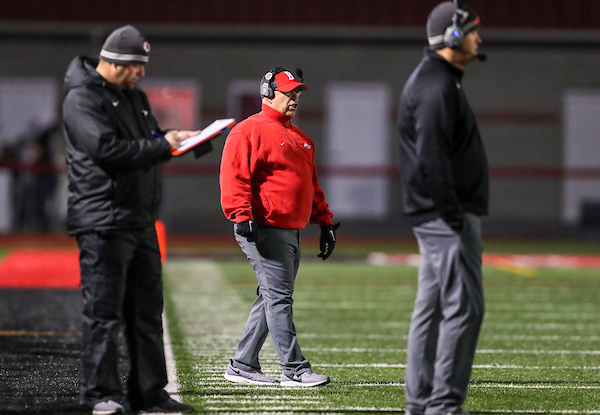 A Jared Griffith kick made it 49-7 with 7:40 to play in the third.
Any hopes of cutting further into the advantage were dashed when Henderson made the most of his fourth carry of the game on the first play of the next series. Henderson outraced everyone for a 65-yard score and what would turn into a 56-7 advantage at the 7:21 mark.
Lewis added a final score later. Hobbs threw a halfback option pass covering 30 yards to Jordan Gay in the fourth. That was followed by a two-point conversion for the game’s final points.
The victory was the 30th in a row against Lewis County. The last victory by LCHS came in 1976 by a 21-6 score.
“The road gets a lot tougher from here,” said Cole. “I’m just happy for our kids.”
Editor's Note: Top photo shows Cam Cole returning one of his two pick sixes in the game, while Carson Winkie is shown powering for yardage in the second picture. In third photo, Bridgeport's defense looks to make a play, while Trey Pancake barrels forward for yardage in the first half. In the fifth picture, Sam Drake makes a play from behind on the LCHS player and Michael Watkins looks to do the same in the seventh photo. Bottom picture shows Coach John Cole, middle, making some adjustments. Photos by Ben Queen and Joey Signorelli of www.benqueenphotography.com.