Bridgeport football Coach John Cole will tell you he likes and respects each of his players he’s had through the decades all the same. He’ll also tell you that he has a little bit of a soft spot for his linemen.
After all, Cole was a lineman who toiled for the legendary late Coach Wayne Jamison in the 1980s. He knows there’s not always a lot of 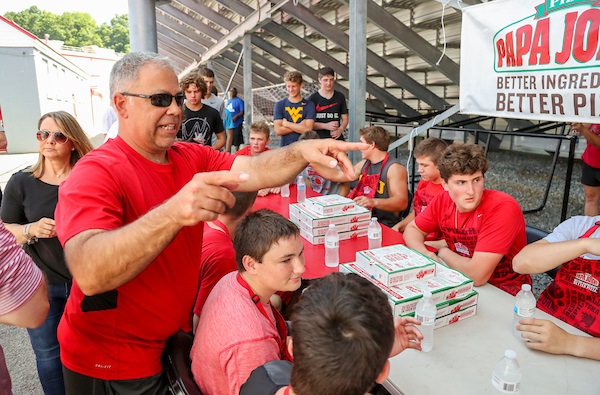 glamour down in the trenches.
Late this morning, there was a chance for the spotlight to shine brightly on the line of the Indians during what is the end for them of the three-week summer practice session. For the first time ever, the Indians concluded the main part of their drills with a pizza-eating competition courtesy of Papa John’s Pizza here in Bridgeport.
“They were told they better not lose in an eating contest to backs,” joked Cole. “I also told the linemen and everyone else that eating is a weird thing. Sometimes, it’s not the biggest guy or the fattest guys who eat the most. Even with that I pleaded with them not to let the backs beat them in an eating contest.” 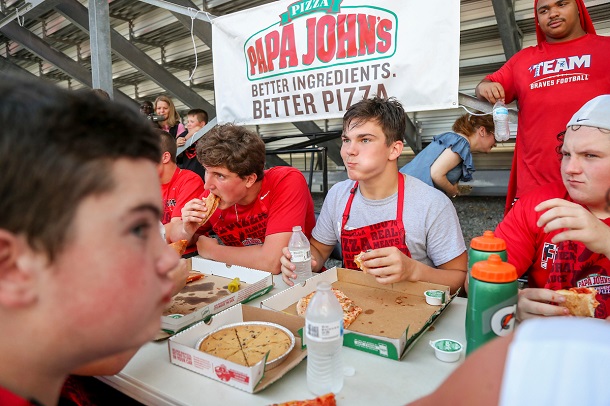 As it turned out, the backs didn’t get the job done. In the first of what Cole is hoping will be several Papa John’s contests each summer, the young men on the line got the job done.
In order to do the contest, each grade picked two backs and two linemen. That put eight individuals on each side of the competition with the goal to see who could eat three large pizzas and a big cookie the fastest.
The eight linemen that walked away winners included Peyton Henderson, Tanner Saltis, Philip Morgan, Josh Wojciechowicz, C.R. Coburn, Johnathan Allison, Quinn DeMotto and Brock Vincent. Henderson was thrilled with the win.
“I kept taking small bites and getting in as much pizza as I could,” said Henderson, who will be a junior this year. “I would take swigs of 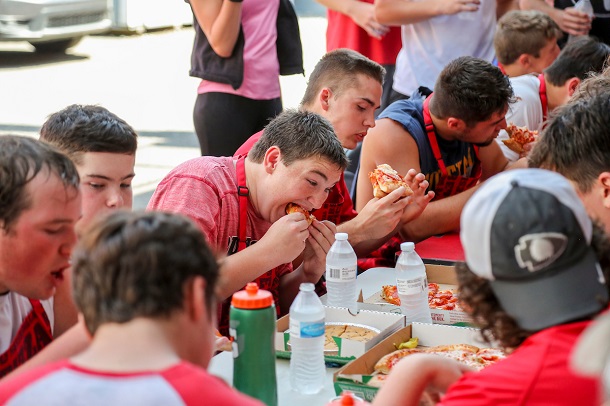 water to make it go down easier. We really didn’t want to lose to the backs because that would have been an embarrassment.”
Henderson said his contribution included four pieces of pizza. His biggest assist, he said, was eating the bulk of the cookie cake.
To make things even more interesting, Henderson engaged in a one on one competition after the official contest was over with back J.T. Muller.
“It was just one slice to see who could eat it the fastest and I got him. Then we had a water chugging contest with a bottle and I won that, too,” said Henderson. “The whole thing was a lot of fun.”
The event didn’t happen by accident. Cole sang the praises of Papa John’s, which is located on Main Street at the upper end of the Home Depot Plaza. 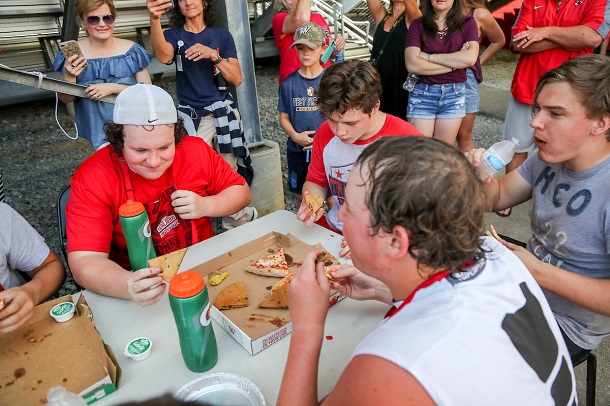 “When they moved into their new location about this time last summer, I was up there to see about their interest in getting placed on the discount card we use as a fundraiser,” said Cole. “When I was there, the general manager, the manager and their marketing director were all there and the marketing guy said he wanted to get involved with helping the team and took my email.”
The email came and suggested the contest. However, it came prior to the start of the season during the regular 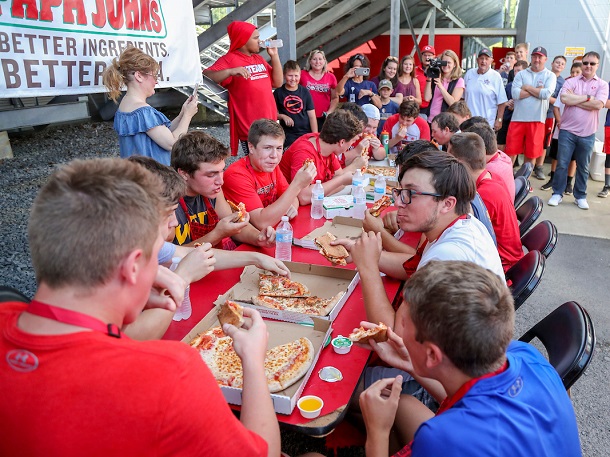 practice session so the idea was tabled.
“We always feed the kids with a picnic at the end of our three-week period and this year I figured let’s have that pizza-eating contest,” said Cole. “I emailed them, and they were all aboard.”
The pizza came for the contest and for the picnic this morning. Cole said Papa John’s also donated pizza to the recent youth camp held at Wayne Jamison Field.
“They’ve been good to us and they’ve been good to the community and we hope people support them,” said Cole.
The event drew a bit of a crowd beyond the players and coaches. Cole invited parents, fans and students to watch if they wanted to join in on the fun.
Check back later this week on Connect-Bridgeport for a full gallery of dozens of photos from the event.
Editor's Note: Photos from this morning's contest by Ben Queen of www.benqueenphotography.com.