When teams win state championships, the reward is obvious. On Monday, Bridgeport High School’s baseball team helped produce a reward for their school not so obvious.

During a ceremony held just before noon, the six-time defending Class AA state baseball champions were honored at the Meadowbrook Mall with a financial contribution to the school. With Coach Robert Shields present and several members of the 2019 title team on hand, the Cafaro Foundation presented the school with a check to be utilized the by the school.

“I was honored for our team and coaches to be recognized by the Cafaro Company and the Meadowbrook Mall. It was awesome for all us, 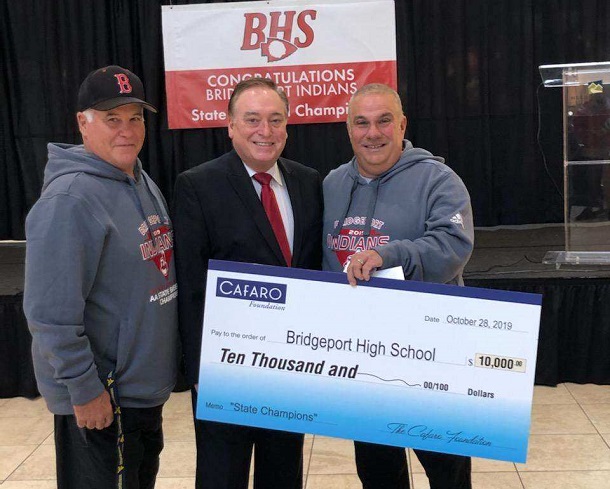 especially the kids,” said veteran Coach Robert Shields. “We had some seniors that graduated that couldn’t make it, but still had a nice turnout despite it being a day when the kids didn’t have school. It was great to see the turnout.”

It was also great to see the check. Shields said he had no idea about the check but was stunned to see it was for $10,000.

“I was very shocked in a positive way,” said Shields. “I figured maybe a couple thousand dollars at the absolute most. If you could have seen the look on my face when I saw the amount you would have known how shocked I was.”

Joe Bell, the director of corporate communications for the Cafaro Company (the Ohio-based entity that owns the mall), talked about the foundation and why it’s important.

“Student athletes are very high on the list of the family that owns our company,” Bell told WDTV. “They like to reward such good performances, especially when those athletes are also students first.”

Shields said it would be nice to be in position to be considered for a check again next year.

“That would great because if we were considered again that would mean we would have to win it again,” said Shields. “We’d love to be back there again next year.”