Sometimes, it’s not how many people believe in you it’s who believes in you. Bridgeport Coach John Cole knows that outside of his own locker room and the Indians faithful, there were not a whole lot of people who believed in his football team’s chances tonight.
After this evening, the Tribe made believers out of all of them.
The Indians, behind a defense that was stingy throughout and a monster game by senior Carson Winkie on offense, upended Bluefield by a 21-14 score to win the Class AA state championship at Wheeling Island Stadium. 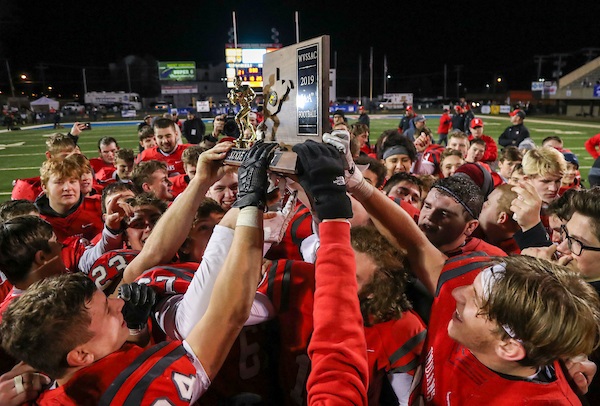 With the win, the second-seeded Tribe finishes the year at 13-1. The Beavers, No. 4 in Class AA, end their campaign at 12-2.
Despite being ranked higher, the Indians heard all week that last week’s game between Bluefield and top-ranked Fairmont Senior was the actual state championship. Cole wasn’t sure if the talk was the motivator, but he knew his team heard it.
“Outside of that locker room, a whole lot of people didn’t think we had a shot. Did that motivate us? I don’t know, but we sure played like I wanted us to,” said Cole. “Here’s what I know. We know we’re a stronger team this year as compared to last, but you don’t know how that’s going to play out until the ball is snapped. Once it was snapped, I saw the team that gained confidence all season long and decided they were going to win it.” 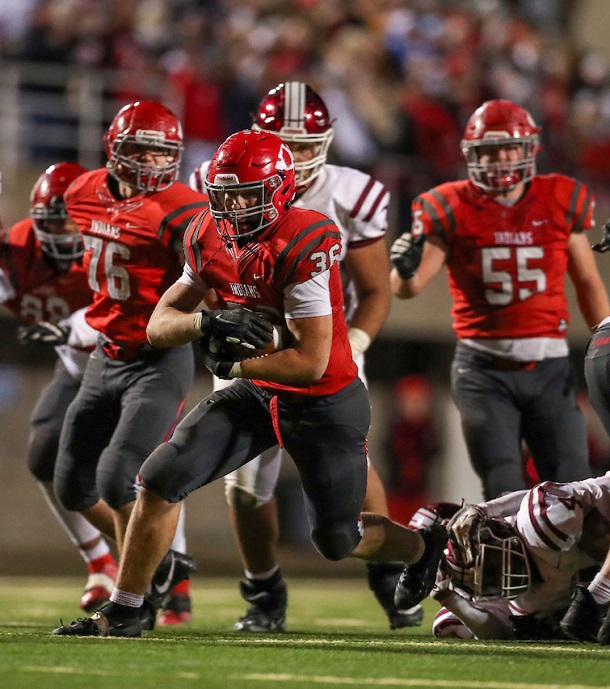 Winkie also heard the talk. And by night’s end, it’s likely no one wearing the colors of Bluefield wanted to hear anything else of Winkie.
“We knew (we could compete) right from the opening kickoff,” said Winkie. “We knew everyone was talking about us and doubting us and they doubted us the whole year. It’s sad because people don’t really know us and underestimated what we went against this year. We knew we had a chance.”
Just how dominant was Winkie? By night’s end, he had carried the ball 43 times for 200 yards and three touchdowns. The 43 carries were the most in championship game history. He also added seven tackles for good measure.
“Bridgeport’s all about conditioning so I didn’t really get tired out there,” said Winkie.  “There were a couple of times I got hit that it roughed me up, but I just went back at it.”
Cole heaped praise on his senior tailback and linebacker.
“He put on 15 to 20 pounds of muscle in the offseason and that’s why he was able to do what he did,” said Cole. “The boy is cramped 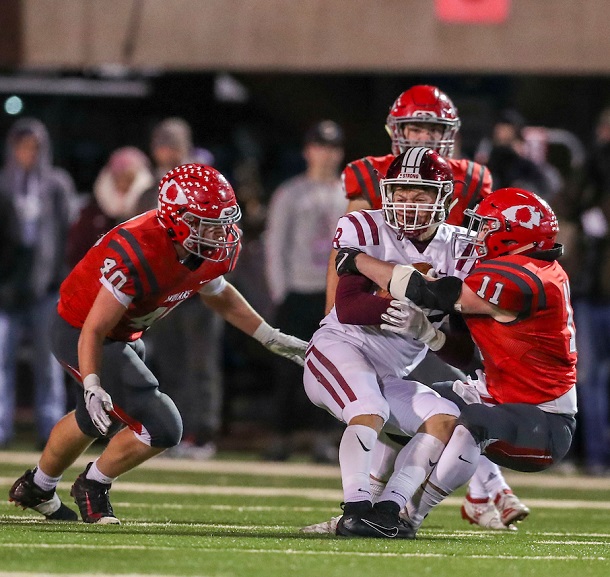 after every game and can’t walk. That’s the type of kid that he is. He’ll be a great success in life.”
He also couldn’t say enough about his linemen who went up against a Bluefield line touting Division I players and massive size.
“We won this game on the line of scrimmage … A lot of football is won on the line of scrimmage,” said Cole. “When you can weather the storm, when you can wear the other team out then you can win that line of scrimmage … The kids made plays.”
While the game wasn’t lopsided, the Indians had to rally from a deficit in the fourth quarter to get the win. And it was a vintage BHS drive that did the trick. Trailing 14-13 in the final quarter, the Indians forced a three-and-out by Bluefield with two minutes to go in the third and went to work with a drive that carried into the final frame.
Sticking with the patented stick-I they had played with throughout the game, the Indians embarked on a 15-play, 70-yard drive that culminated with Winkie plowing ahead for a two-yard score with 6:47 to go that made the score 19-14. For good measure, Winkie then burst forward for the two-point conversion for the 21-14 advantage and what would prove to be the game’s final points. 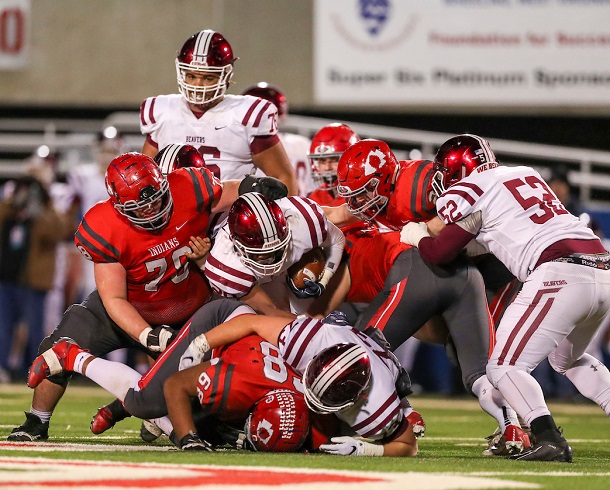 “It came down to getting that two-point conversion,” said Winkie. “We were able to do what we did because of the line. The line was incredible on both sides of the ball.”
Senior Brian Henderson, who plowed the way for plenty of Winkie runs, said the decisive score was a simple one.
“It was straight off tackle,” said Henderson, who also drew a huge offensive pass interference call in the fourth quarter. “We just hit our blocks and Carson did the rest. Once we got the lead, we just got stronger defensively.”
Henderson’s statement wasn’t hyperbole. Bluefield’s final possessions ended with a punt, an interception by Devin Vandergrift and a drive that began at its own three-yard line with less than 30 seconds to go.
After a tightly contest first half that ended in a 7-7 deadlock, the Beavers wasted little time in gaining their first lead of the game after a first 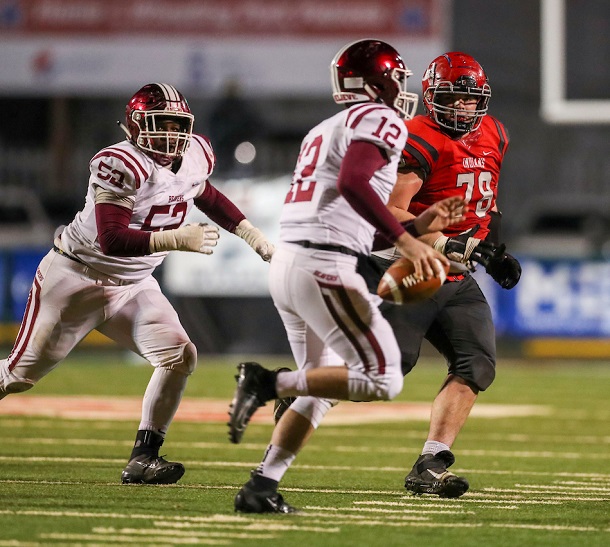 half that ended in a stalemate. Three plays into the second half, quarterback Carson Deeb found a streaking Brandon Wiley down the left sideline and hit him with a perfect pass for 61 yards.
The score came at the 10:30 mark of the third period. It left Bluefield up 14-7 after a Kaulin Parris point-after kick.
Despite the quick score, Bridgeport went right back to work. The Indians, who didn’t punt until their final possession of the contest, embarked on another back-breaking and clock-eating drive that brought them back into the game.
The Indians used a 12-play, 68-yard drive to get their second touchdown of the contest. Winkie capped it with a two-yard burst off tackle to make it 14-13 with 3:59 showing in the third quarter. The Tribe would miss the extra point following a false start penalty, but Winkie’s two-point run in the fourth would erase the miscue.
By game’s end, Bluefield’s offense had 304 yards, but only two big plays – both of which resulted in touchdowns.  Deeb finished 11-of-19 passing for 234 yards with two touchdowns and an interception.
JJ Davis led the rushing attack with 76 yards on 18 carries.  However, Bluefield finished with a total of 70 yards on 20 carries in the game 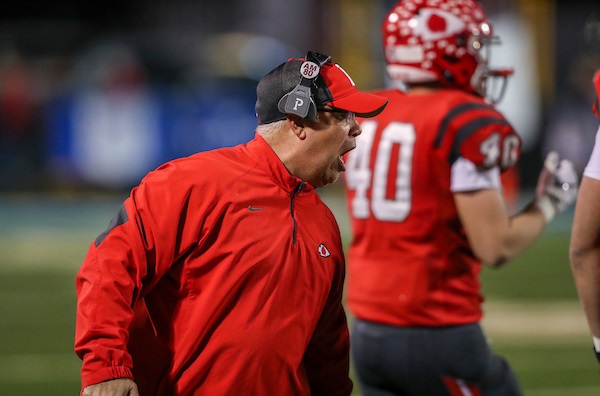 as Bridgeport made its foe one dimensional.
Bridgeport finished with 269 yards of offense and all of it came on the ground on 62 carries. Bridgeport officially did not attempt a pass as the one pass resulted in a pass interference call. Trey Pancake added 51 yards rushing on 12 carries for the Indians.
JT Muller led Bridgeport’s defense. He finished with eight tackles. Shawn Mitchell had 13 stops for Bluefield, while Wiley and Qunzell Payne both finished with 12 tackles.
As far as getting what they wanted to start the game, both teams couldn’t have asked for a better start offensively. Both teams, however, didn’t like how their initial drives ended.
The Tribe’s first possession went inside the Bluefield 30 and ended with a fumble. Bluefield then began a massive sustained drive that made it to the Bridgeport 1-yard line before the Beavers fumbled the ball into the end zone and the Tribe’s Devin Hill recovered.
As it turned out, the next drives for each team wouldn’t end with so much difficulty. 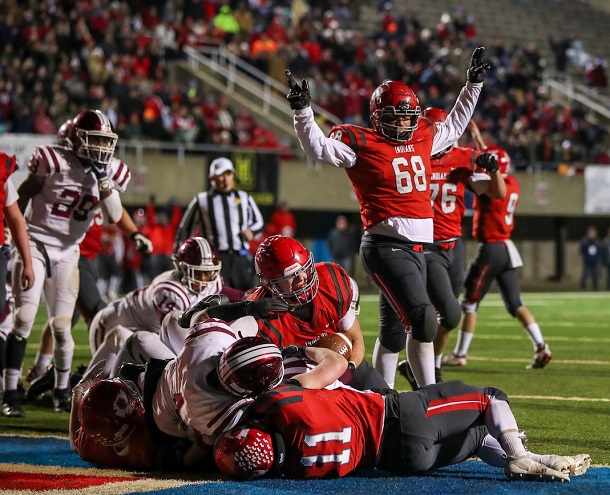 Bridgeport’s second drive was just as effective as the opening one, but without the fumble. In fact, it was just what the Tribe needed.
Starting on their own 20 after the fumble recovery, the Indians went to work in the methodical way Cole said they needed to heading into the contest. Bridgeport used 15 plays to cover the 80 yards – including converting a fourth down at the Bluefield 45 – to finally hit paydirt.
Winkie did the honors on a drive where he was a complete workhorse by blasting over from five yards out. Austin Springer’s point-after kick made it 7-0 with 5:55 to go before halftime.
“Coming back like that was huge,” said Cole. “I can’t tell you the last time we had three fumbles in a game.”
Bluefield’s second drive would also be impressive. It just didn’t require nearly as much time.
After two plays got the ball to their own 40, the Beavers went for a home run and hit it out of the park thanks to the arm of Deeb. Deeb 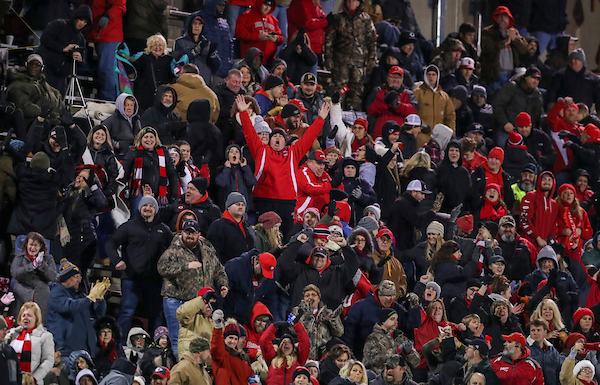 unleashed a perfect pass to Wiley who ran past the Tribe defense and under the pass for a 59-yard scoring strike. Parris added the point-after kick and made it 7-7 as 5:55 showed on the clock.
The points would be the last of the half for either team. Bridgeport, who came into the game with just six lost fumbles, fumbled for a second time (they would end with three) to give the Beavers the ball at their own 47 with 2:04 to play. However, a penalty put Bluefield into a hole it couldn’t recover from and it punted the ball away to the Tribe late. Bridgeport took a knee on the final play of the half to end the first two quarters in a stalemate.
Bluefield finished the half with 167 yards offensively. Deeb completed 5-of-6 passes for 103 yards with the one touchdown. Davis finished 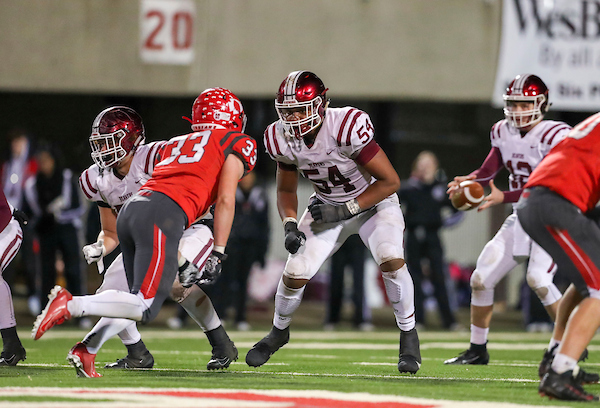 with 63 yards rushing on 13 carries.
The Indians had 125 yards of offense – all on the ground – with Winkie accounting for most of it.  He carried the ball 19 times for 97 yards, including the Indians only touchdown.
Winkie also led the Bridgeport defense, along with Josh Wojciehowicz, with five tackles. Muller and Michael Watkins had four stops each in the first half.
Defensively, Wiley and Jahiem House paced the Beavers with six tackles each. Payne added five in the first two quarters.
The state championship was the 10th in football in Bridgeport history. It was the first since 2015. The Indians will move to Class AAA next season.
Editor's Note: Photos by Ben Queen and Joey Signorelli of www.benqueenphotography.com.