From the Bench: Annual Event that Draws Thousands to City Still Likely a Go Thanks to BHS's Godfather

The annual Charles Pointe-Indian Run Cross Country Invitational has turned into one of the biggest sporting events in Bridgeport.
For the last 10 years, going back to the days when it was the Ben Queen Photography Invitational, the event has done more than serve 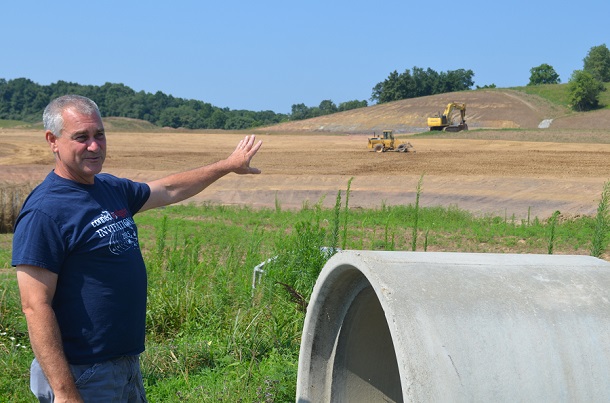 as the season-opening home cross country meet and often the only home meet of the year. It’s served as an event that brings well above 1,000 athletes and participants into Bridgeport for a few hours.
That’s not just good for the cross country program in gauging where it stands in the early going. It’s also good for the city, which sees plenty of extra B&O dollars rolling into the coffers by those who are sure to spend some cash at gas stations, restaurants and any other number of businesses before and after the event.
There was a thought that this year’s event might be in jeopardy. Actually, the thought was primarily mine – but it was legitimate considering the meet is held at the Bridgeport Recreation Complex off of Route 131.
The reason for that was that a portion of the course goes into an area that isn’t just seeing a bit of earth-moving. It’s in an area that’s seeing earth-moving that’s part of a $40-plus million contract. How, I wondered, was this event going to take place with not just the earth torn up, but millions in heavy equipment throughout the area? 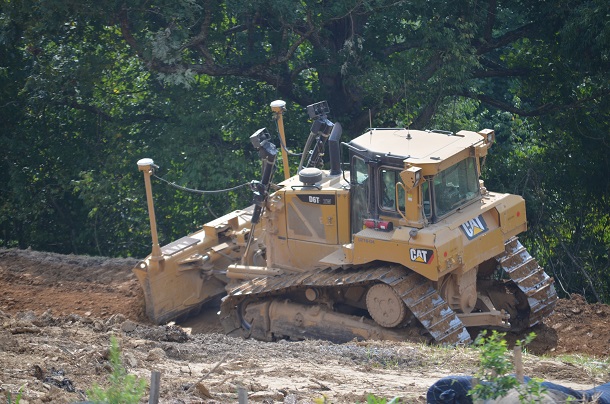 I should have known better that Jon Griffith would have a solution. After all, you don’t become West Virginia’s Godfather of cross country and track without knowing how to get things done.
“It was a bit of a concern and we’ve been fortunate that everything looks to be in order for us to more than likely be able to go ahead with the meet,” said Griffith. “For starters the course has changed and that’s required some additional work.”
Work, Griffith said, undertaken by many. Most recently, he pointed out to cross country standout Jackson Jacobs and his father Kemper who went out and actually mowed a significant potion of what the new course will be.
“That’s a big help, but we’re still needing one area left to make it definitive. We need the (earth-moving) done by the area the outdoor fields would be situated because it’s just top soil that needs moved,” said Griffith. “That’s our stand and finish area.”
Outside of that, Griffith said most of the course is done. A portion of it entails the same course as last year, while the rest of the course is new and has been move out of the current construction area.
While it sounds easy, it’s not. Along with the physical labor of shaping the course as mentioned above, there were – and still remain – many moving parts.
“The engineering group CEC, particularly Lucas Gardner, designed it initially and he and I made modifications. CEC has been generous to a 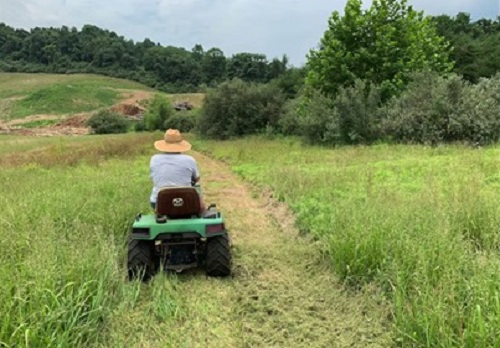 llow him to work on this and not charge us,” said Griffith.  “Lucas, Jimmy Christie and Ryan Haws have all been allowed to assist. CEC has been a tremendous partner.”
The reason it’s possible that the event can take place isn’t because of last-minute planning. Griffith saw this issue and he and Gardner because the redesign back in January when they walked the area and made adjustments.
“We went back in the spring and we knew the course as it stood wasn’t going to work with the construction, so it was a good thing we already had a jump on it,” said Griffith. “We had people graciously work with us the entire way; people we needed to work with us to get to this point.”
The city staff, he said, stepped up as usual. He pointed to Parks and Recreation Director Joe Shuttleworth and City Engineer Beth Fox as two of the usual suspects that knew of the event’s importance to the students and the city.
“They have worked closely with us to verify where the course fits in best in relation to the complex,” said Griffith. “It’s nice to know they’re always willing to assist you even with them dealing with such a massive project. Hopefully, with everyone’s help we’ll have the course ready and okay for the race. We feel confident about it.”

Confident enough it’s on the schedule. Confident enough teams are beginning to sign up.
“It’s been a huge event, but the possibility exists it will be a bit smaller this year. The uncertainty of the course may hinder participation,” said Griffith. “We’ve already got good schools committed, even from out of state, and I’m certain we’re looking at the complex seeing well over 1,000 people from athletes to spectators.”
The Sept. 14 meet, which also features a middle school portion, just has a few teams signed up. Along with Bridgeport, Fairmont Senior’s girls’ team will participate along with both squads from Oak Glen and Northern Garrett (MD). Bridgeport Middle School will be joined by Suncrest and Harrison County’s Mountaineer Middle School.
The high school girls race begins at 9 a.m.  and the boys will follow at 9 a.m. At 10 a.m., the boys 5K will be held and will be followed by middle school girls at 11:30 a.m. and the middle school boys at noon.
“I don’t know how many teams we’ll have, but it will grow. As we get into August, the numbers will start going up a good bit,” said Griffith. “Those competing will be a better and faster course with a couple of good hills in one loop unlike the two loops in the past.”
Griffith also praised Genesis Partners, the owners of Charles Pointe and the sponsor. Along with sponsoring it, he said they area allowing the race to partially take place on their property.
“A big thanks to Jamie Corton on both fronts. Also, a big thanks to the Bridgeport Police, Fire and EMS for already pledging assistance,” said Griffith. “There are so many people to thank.”
If it happens as expected, be sure to thank Griffith. And thank him for more than just the event taking place if things go as planned.
“We eventually want to get this court as part of the city’s trail system as a natural trail,” Griffith said.  “It will tie into nicely to what the city has in the works. I think it’s a good thing.”
Wrong this time Godfather. It’s a great thing. Let’s hope everything falls into place.
Editor's Note: Top photo shows John Griffith pointing out the earth work taking place that will still be taking place when the Charles Pointe Invitational will likely be going on. In the second photo, some of the heavy equipment is seen moving soil at the Bridgeport Recreation Complex. In the third photo, a member of the Jacobs family helps clear parts of the course that consists of new areas and areas from the past. Below is a conceptual rendering from CEC of the course. 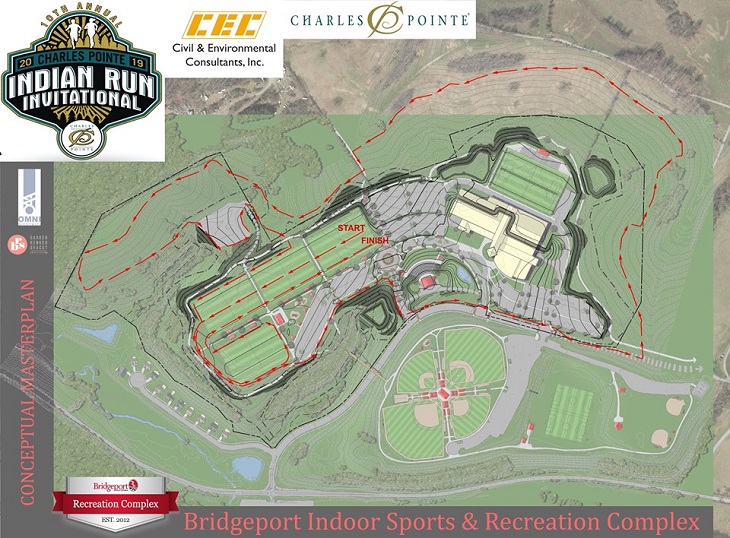 Thanks for doing an article on our home event, the Charles Pointe - Indian Run Invitational. The gentleman on the mower is Kemper Jacobs , the father of former BHS T&F standout Kemper Jacobs and the grandfather of current BHS XC and T&F standout Jackson Jacobs. Their help has been invaluable, as has the that of all those mentioned in the article and those that I forgot to mention. I would also like to ask that people in the community to stay off of the course for now. As mentioned in the article, part of the course is still on private property and other portions are in the existing construction zones. Once construction is complete and we are able to move the course entirely on to city property, the course will be open to the public as a nature walk and off-road running trail. Until then, please be respectful and refrain from using the course. Thanks!