From the Bench: As "Last Dance" Ends, Pat Shaffer Tells Story of being at Jordan's "First Dance" and More

Often, when writing this sports blog and there is something big in the sports world, I try to find a way to localize it. Many times, that is not possible.
Such was the case during the last several weeks as ESPN aired the 10-part, five-week Michael Jordan documentary titled “The Last Dance.” It chronicled, in detail and with great fanfare, the career of Jordan who is considered by most as the greatest basketball player of all time. 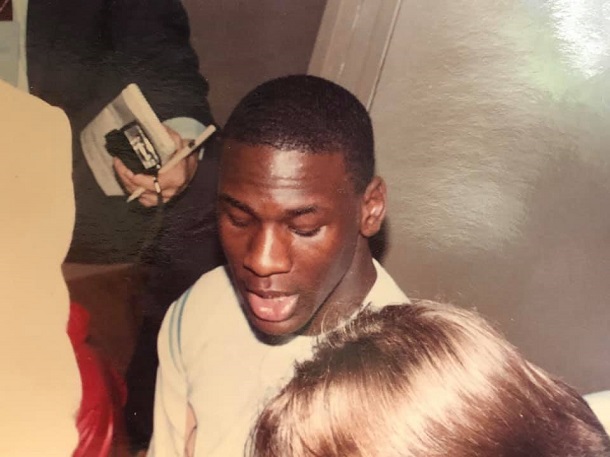 I had not given it much thought about a local angle after the first week of the series. My thought process was that if something would materialize, it would early.

My thought process was wrong.
A little less than an hour prior to the final part of the series, one of my friends and Facebook friends, Pat Shaffer changed that with a picture he posted on the site. It showed a picture of a very young Michael Jordan in the locker room surrounded by a bunch of microphones
Many of you know Pat Shaffer from his time working as an account executive for years at WDTV. You may not have known he had another unpaid occupation that put him right into the mix of this bog.
The caption talked about Pat being the photographer and his older brother Joe being the reporter. It was after Jordan had hit the game-winning shot to beat Georgetown 63-62 in the 1982 NCAA title game in the Superdome in New Orleans.
I figured Pat had ties even back then, still a senior in high school at Notre Dame, may have had media connections, or his older brother Joe – the former Harrison County Prosecuting Attorney – had connections to get them into the game. 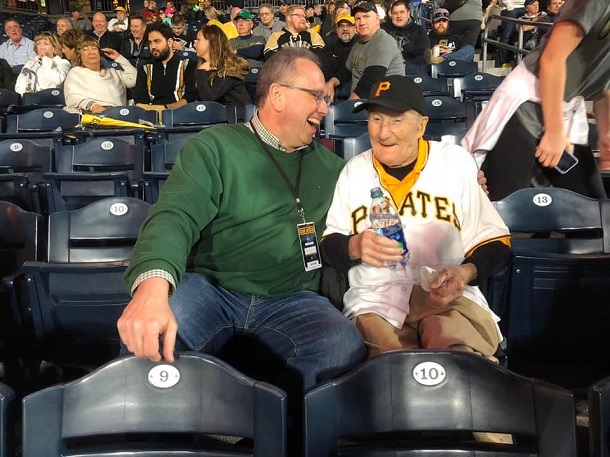 Had that been the story, in this era of almost no sports activity, I would have blogged about it. Instead, the story is wonderful in the way access was gained. Even better is a series of sports moments Pat Shaffer has been involved in that would make just about anyone not named Bob Costas blush.
While the Shaffer brothers like to do things now at the spur of the moment, back in 1982 they – along with Bridgeport’s own Dr James “Jimmy” Malone and brother Joe’s future wife – had tickets for the game purchased a year ahead. The only problem was they were way up in the Superdome.
“They were terrible,” said Pat of the seats.
That is when big brother went into action. Joe Shaffer went down to the lowest level and found fans from Houston, who were getting beaten, and as they left offered to buy their tickets at face value. The fans, who Pat Shaffer said were just wanting to get out of there, readily agreed.
“We ended up right behind Georgetown’s bench for the finals. Before that, we went early to sell the tickets we already had,” said Pat.
Pat and Jimmy go in and as Joe remains outside selling the seats and the action begins. They immediately run into John Havlicek, the Celtics Hall of Famer and one of the Pat Shaffer’s early idols. Not only do they meet him, but they have a conversation with him.
Had that happened, along with the incredible seats, that would have been a good story. But there is more. 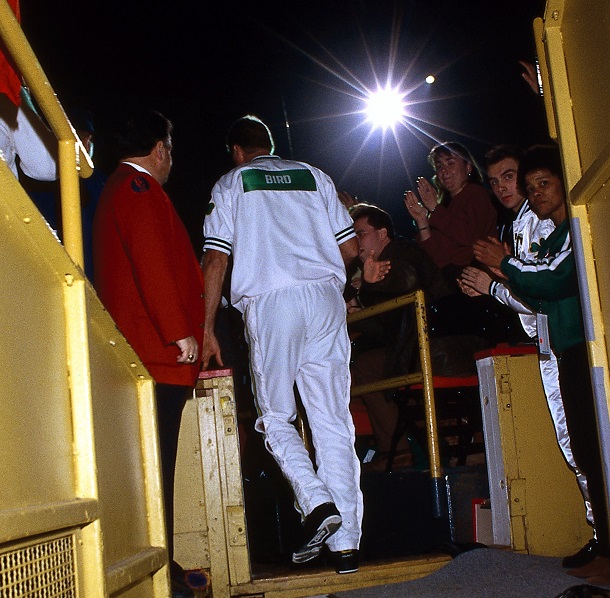 “We’re going to the bathroom after that and I look down on the floor and there’s this card on the floor and I pick it up and it has a bunch of press passes stapled to it,” said Pat. “They had passes for upper and lower media members and one says CBS Sports … I said ‘Are you kidding me? When Joe came back, we had to decide what to do with them.”
As the game unfolds, they know they are watching a classic. And as it ends, they decided to try and get into the locker room.
“We figured to give it a shot, even though we noticed that all the media guys had their passes in a lanyard,” said Shaffer. “The finish just was so chaotic after Jordan hit that shot we just flashed the passes up and, boom, right into the locker room. Me at 17 and Joe (a senior at Fairmont State) at 21.”
The only thing Pat does not remember is where Jimmy Malone went to. He remembers his brother grabbing a reporter’s notebook and him holding a camera – a roll of film camera, which meant photos were limited.
“Joe jumps in and just starts asking questions to James Worthy and I’m taking a picture and decide to ask Worthy to sign my program, and he does,” said Shaffer, who said he still has the program.
Eventually, they made it to Jordan. It was here Pat Shaffer snapped the picture of the still very juvenile looking Jordan. And he never asked for an autograph after hitting up Dean Smith for one.
“He looked at me like he wanted to kill me,” said Pat. “Still, when I was watching that series, I’m think I’m an idiot for not asking him to sign it. That would have been nice to have.”
As if the experience alone was not enough. Shaffer has found himself in similar situations since. He and his sister Kim made a trip to Boston for “Larry Bird Night” and was there to slap five with him as he emerged from the tunnel as both he and his sister can be seen on a post made this week on the Celtics’ Twitter account from that evening.
“I was down on the floor. I didn’t think anything could be better, but I was wrong,” said Shaffer.
Shaffer was staying at the hotel where Bird was staying that evening and Bird’s agent happened to own the bar inside the hotel. And a private party, that included many greats including Magic Johnson, was unfolding. 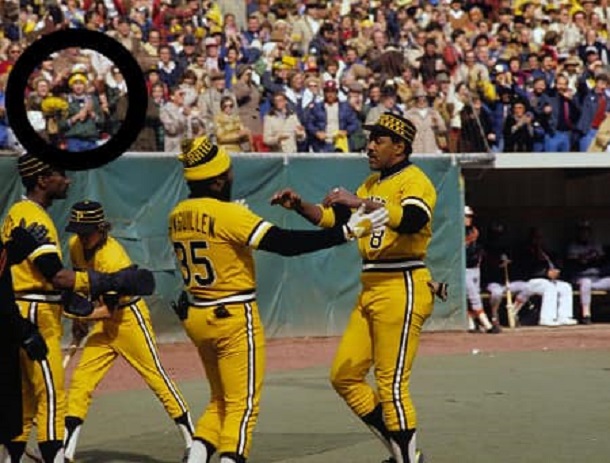 “I’m thinking I’ve got to get in here,” said Shaffer, who said his sister wasn’t ready for the adventure at the time. “Finally, here comes 6’10 (Celtic) Kevin McHale and I just causally duck in behind him and walk right into the party.”
Surprisingly, Shaffer had company. Another bystander pulled the same trick and got into the party with him. The man’s stay did not last long as he asked for autographs and was removed.
“He got booted out, so I decided not to do that or eat anything and just mill around,” said Shaffer. “I ended up hanging out in a group with Bill Walton all night and he just kept telling stories. It was incredible.”
Shaffer has been around for many memorable moments He was in Three Rivers Stadium for Game 4 in 1979 for the World Champion Pirates. He served as the Supervisor of Ushers at PNC Park and was there for many magical moments during the Bucs’ rare three-year run at excellence.
Yes, there is more.
“I went to see Larry Holmes fight in the early 1980s and we somehow ended up right near ringside,” said Shaffer.
Want to guess that is not the end of it? If so, you are correct.
“After dinner at the hotel, Larry Holmes is coming through the lobby with his entourage and I patted him on the back. I got wind milled with my arm and the guy doing it says, ‘don’t touch the champ.’ That took me by surprise, but that ended quickly,” he said
The reason is that after that happened, the Shaffer brothers along with their friends Doug Sutter and Chris Yearego are walking to the arena. They are joined in their journey by none other than legendary promotor Don King.
“Tommy Thomas was on the undercard fighting Jimmy Young. We were lobbying for Tommy to get a shot at Holmes and Don King was going right along,” said Shaffer
There is another Jordan story too. Shaffer was there for Jordan’s first-ever NBA title game in Chicago when the Bulls battled the Lakers. He and his brother and their friend Greg Banko made the trip without tickets after just deciding to go.
“It’s a little hard to find three tickets so I went to find tickets and Joe and Greg were together. I saw this one guy selling away from everyone and he really looked familiar,” said Shaffer. “He had two left and I got them for $50 each. Turns out I bought them from Magic Johnson’s father.”
About the only thing that went wrong, from a Jordan story perspective, is that the Bulls lost the opener that night. It was the only loss in a give-game title series win by the Bulls.
Regardless, Joe Shaffer did more than just watch the Last Dance and have memories. He was their for the official “First Dance” by Jordan in College and the “First Dance” in the NBA. Not too many people can say that. And I am betting no one can say they viewed it in the manner he did.
Editor's Note: Top photo is the one taken by Pat Shaffer of Michael Jordan just after North Carolina won the NCAA title in 1982, while he's shown with legendary Pirates Usher Phil Coyne (who just turned 102) after his recent retirement - and Shaffer managed to make the Root Sports television special with Coyne. In the third photo, Shaffer, partially obscured, can be seen hitting hands with Larry Bird at his night being honored as his sister Kim Shaffer Karakiozis is in the background. Bottom photo shows Shaffer, circled, in the front row for Game Four of the 1979 World Series at Three Rivers Stadium. All photos courtesy of Pat Shaffer.