From the Bench: Best Name in BHS Football History? Senior Standout Trey Pancake has all the Ingredients

I still remember when my daughter was 5 years old and was playing youth soccer for the first time and I met the coach who had “drafted” her sight unseen. He told my wife and I that her name “Jordan Mitchell,” sounded like a good soccer name.
As it turned out, my daughter is sweet, intelligent and beautiful. She is not a good soccer player. She wasn’t then. She’d be the first to tell you that’s the case two-plus decades later. 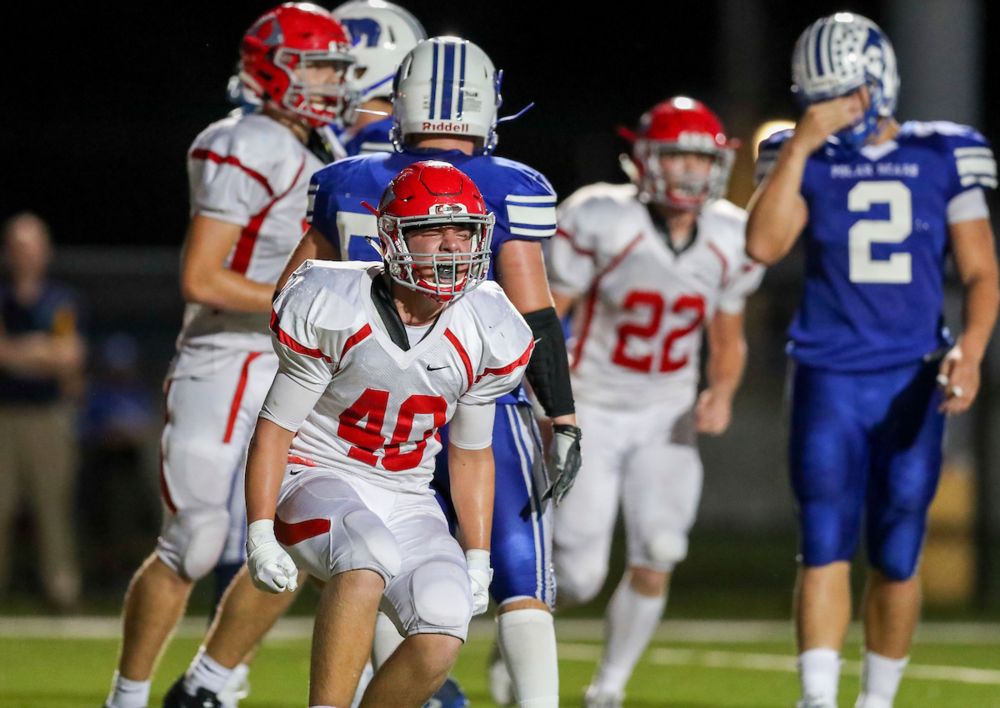 Sometimes, in the world of sports, names fit. For Bridgeport High School’s 2019 football team, one of the senior leaders has a name that fits like a glove.
If you don’t know him, allow me to introduce you to Trey Pancake. If you follow the Indians, you know who he is. If you don’t and are about to, you’ll learn about him soon enough.
Before we get to the reasons he’s been listed by MetroNews as one of the players to watch in Class AA, let’s talk about the name. Pancake, when it comes to football, is meant for someone who is physical and dominant. Bridgeport’s version fits that mold.
Let’s be honest, the name that’s coupled with his style of play puts Trey Pancake into the running of greatest Tribe football names of the modern era. For those of you wondering, the era I refer to is from when I started covering high school sports either full or part-time or became a full-time observer. And that’s 1987.
The senior two-way starter is aware of his name’s relationship to physical football.
“Every time somebody new is covering our games, I hear it in the media. If a new radio person comes to the field for our game, I’ll hear about it from someone what they’ve said about my name and I get a kick out of it,” said Pancake. “The coaches will joke with me about it 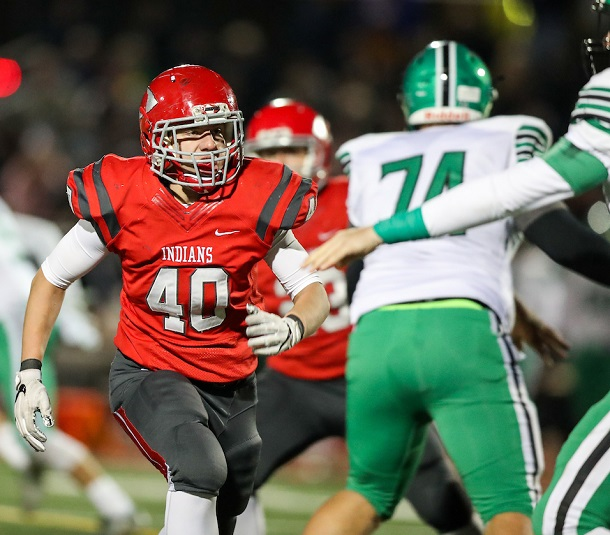 too.”
When asked about his linebacker’s last name, BHS Coach John Cole laughed and quickly stated without any prodding what this blog is debating.
“I don’t know if there’s a better name out there that we’ve had,” said Cole. “I’ve coached a bunch of them too.”
And then the old offensive lineman came out.
“About the only missing piece of the equation is that I’d like to have him with that name as an offensive lineman because that’s where you make your pancake blocks; you know, put someone on their back. I guess he’s been fulfilling that role, and we’ll need him to continue that role, by pancaking the guys he tackling, or the guys he’s blocking or even the guys trying to tackle him.
“The media people want to talk to him because of his name and because, well, he’s a good talker who really likes to talk,” Cole continued. “Everyone, when they do their highlights, they bring it up and Trey eats it up. We expect him to back it up even more this year because we’re going to need it.”
Pancake is a rarity in BHS football circles. Although he didn’t start the first week of his sophomore season, he went into the Lewis County season opener in the second quarter at middle linebacker and he’s been on the field since. 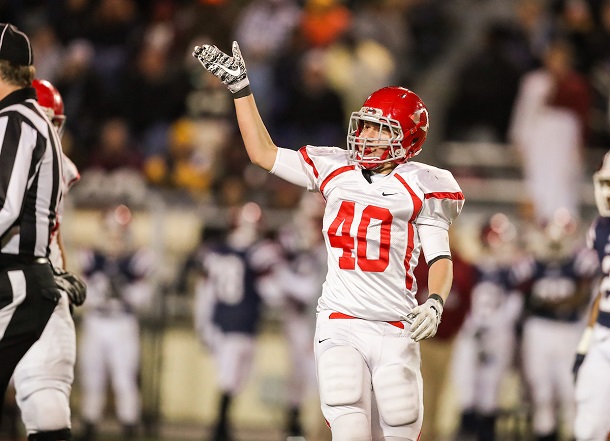 “That was the first week and the next week we’re playing Wheeling Park and they told me I was starting. I thought, ‘here we go.’ The good news is that I had some guys leading the way that year that made it easier for me,” said Pancake. “There were seniors like (Chapin) Murphy and (Brice) Haines who helped me out and set an example of how to play and how hard to play.”
Pancake said that sophomore year it took a while to get comfortable. When the playoffs rolled around, however, he said it was already second nature.
“We needed a ‘Mike’ linebacker and he filled that position for us. He did good for us and he’d be the first to tell you he had some pretty good guys in front of him and beside him that helped him out,” said Cole, pointing out exactly what Pancake said a few paragraphs above. “ … That position you have to be able to go sideline to sideline and he had the ability as a sophomore to do that.” 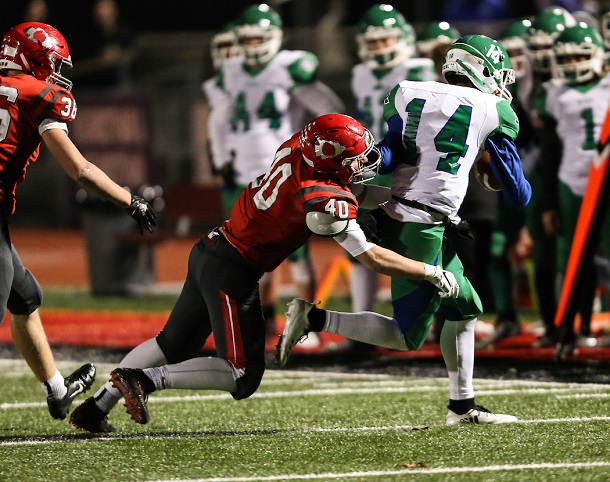 That was 2017. In 2018, Pancake met the world of playing both sides of the ball. It wasn’t easy even with numbers that were impressive.
“It took time to adjust because you have to be in so much better shape. It was difficult for sure,” said Pancake.
Pancake didn’t play both sides, he said, until week five against Robert C. Byrd. It was a contest that saw the Indians twice rally from double digit fourth quarter deficits to get the win.
“That was a rough game and maybe I needed it. It took me three or four games to get used to it,” said Pancake. “I wasn’t where I needed to be physically for that switch early on.”
Cole didn’t disagree.
“He didn’t come on like the way he should have, even early on defense. Eventually that picked up and was where we wanted it, but it was a struggle initially seeing him go both ways,” said Cole. “The positive was he surfaced as the runner we felt he could be. He doesn’t have catlike speed, but he makes up for it with excellent vision that we noticed when he was a freshman.” 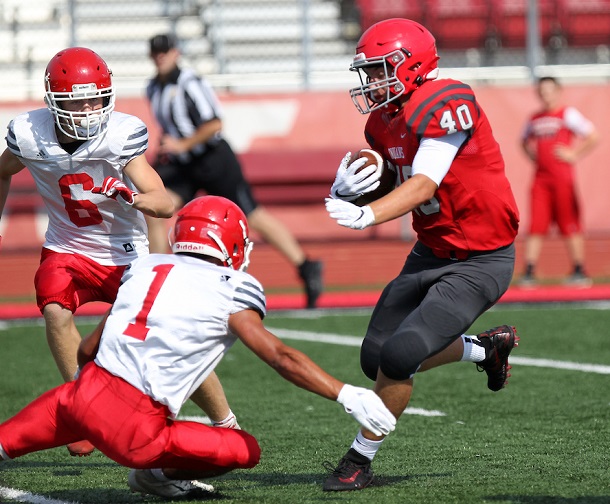 Last year, in an offense featuring Jake Bowen ending as BHS’s all-time leading rusher, Pancake was the number two threat. He finished the year with 647 yards rushing and nine touchdowns on 105 carries (6.2 yards per carry); averaging 49.6 yards per game.
Defensively, he finished as the team’s third leading tackler behind fellow senior Carson Winkie (89) and the graduated Austin Sponaugle (73). Pancake finished with 67 tackles that included one and a half sacks, an interception and three forced and recovered fumbles. ‘
The numbers, on both sides of the ball, need to be better if BHS can find its way back to Wheeling Island. Cole said he’s got the ability and some other intangibles to make that possible.
“Trey’s a good kid and a good teammate who’s extremely important to what we want to accomplish. He’s the kid you want to be around,” said Cole. “He’s got a ton of personality, always smiling and talking – maybe even a little too much – but we’ll take him. Trey is a character who just happens to be a pretty good football player with a pretty good football name.”
As for Pancake, he knows the expectation for him are high for several reasons. The team needs it and, well, so does the name.
“Honestly, there’s a little more pressure when you think about it. Everyone thinks Pancake should be out there pancaking people so I hope to live up to that,” said Pancake. “I just have to put it all together.”
In other words, he’s got all the ingredients. Now, he knows it’s time to mix them all together on the football field and be the best Pancake he can be.
Editor's Note: Top four photos show Pancake in action during the 2018 season. Bottom photo shows him running the ball this year in a scrimmage with Parkersburg. Photos by www.benqueenphotography.com.