For those who closely follow the high school sports scene, they know things have a chance to change in a big sort of way in 2021. Although it’s far from a done deal, principals from across West Virginia voted in favor of a fourth classification in basketball for West Virginia high schools beginning that season by a whopping 111-26 margin.
The principals, represented by the West Virginia Secondary Schools Activities Commission (WVSSAC) Board of Control, have now sent 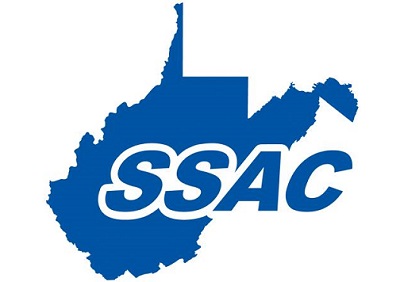 the measure to the West Virginia State Board of Education. It is the state BOE that will have the final say.
And when will that be determined?
First, the WVSSAC will submit the matter to the BOE. Then, it will be put out for public comment for 30 days followed by a vote on the matter. My good friend and MetroNews prep writer extraordinaire Greg Carey said a final vote would likely be in July.
One of the principals that voted during a WVSSAC gathering at the Stonewall Resort on Monday and Tuesday of this past week was our own Matt DeMotto from Bridgeport High School. DeMotto voted no, which left him in the minority. We’ll get back to DeMotto’s vote shortly and allow him to address the matter.
First, let’s be clear about what got this started. Issues involving recruiting and, in particular, recruiting done by private schools in West Virginia that gives them what many firmly believe is an unfair advantage in basketball and other sports. The entire process, regardless of good intentions, goes back to recruiting. 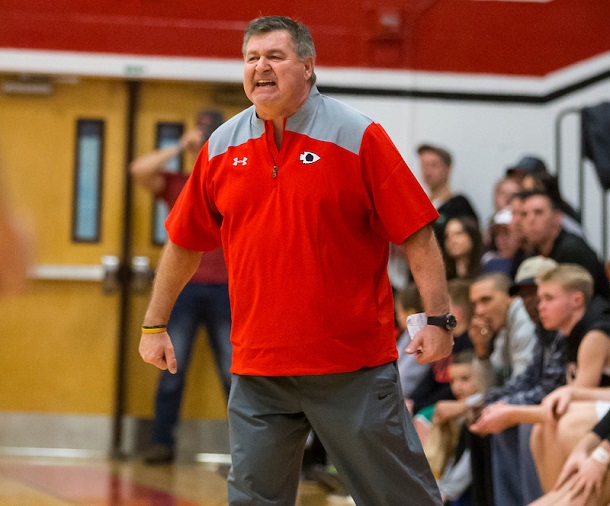 Is recruiting taking place? You better believe it is taking place. It probably has for as long as people tried to get an advantage in the old “if you ain’t cheatin’ you ain’t tryin’ mantra.
You also better believe recruiting is nothing new. My first experiences in writing at the state tournament came in 1987 and it was a big topic and a bone of contention then with one very successful boys’ hoops school at the center of the dilemma during that era. And there were one or more mentioned every year since that I’ve heard talk about while at the Charleston Civic Center.
The sad part is that some lay the blame of recruiting entirely or almost exclusively at the doorstep of the private schools. I’m not going to change anyone’s mind here who believe that, but for those with an open mind, those not decided or those new to the situation let’s be clear that public schools have recruited – some to very blatant levels – for, again, as long as I can remember.
I don’t have to name schools private or public that either recruit or have enough players from out of their district, out of their county, out of the state and even out of the country on their roster to let you know it’s either happening or believed to be happening. Head to any message board the internet offers for fodder and you’ll see the accusations, evidence (many times the lack thereof), and much more.
Will this proposal stop it? No chance. The groups – sometimes no coaches are involved at all and sometimes I’m certain they’re actively involved – wanting that 6’5 shooting guard at their school will make it happen at the public school level by doing it in what I call illegally legal.
You know what I’m talking about. A family suddenly moves into a district, the family sometimes finds pretty good jobs, and it just so happens they have a son or daughter that can hoop it up. And it occasionally happens said family and child move once the season or 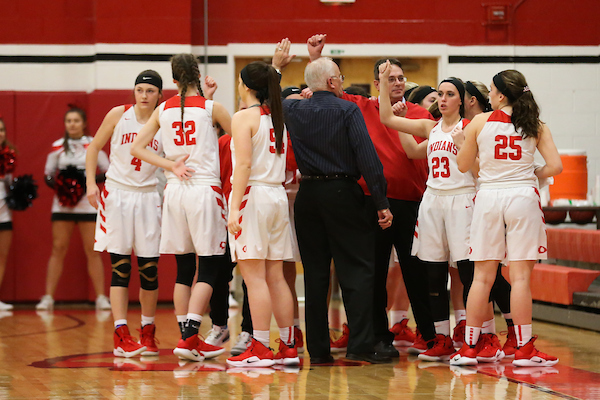 school year is over. It’s all legitimate and it’s also legitimately wrong.
That’s just as bad as someone making the case for that same 6’5 kid to go to a private school in a straight forward recruiting matter. There are multiple kinds of cheats in this process and they aren’t phased by this proposal in the slightest.
So how can you fix it? You honestly can’t. The initial responsibility to curtail recruiting lies with each school’s principal, but even then, it’s not as easy as just saying the principal can stop it. Principals try to stop cheating in the classroom as well and while some are more successful in others in finding ways for the staff to address it, cheating on the academic side of things is as American as cheating in youth and prep sports.
That said, if the state BOE votes it down, then it’s over for at least a year as the WVSSAC can bring it back up once again. If the BOE accepts it, then in basketball will soon see Class A, Class AA, Class AAA and Class AAAA.
Unlike past classification setups, enrollment isn’t the only gauge. It will still be the biggest as enrollment will make up 70 percent of where a school ends up. The final 30 percent involves issues such as a school’s proximity to a county seat, income of a school district and other socioeconomic factors that will be used in the formula.
Based on that from the breakdown of current numbers I’ve witnessed, Bridgeport would be one of 28 schools in the new Class AAA. Familiar names like Fairmont Senior, Robert C. Byrd, East Fairmont, Lewis County, North Marion, Grafton, Elkins, Liberty, and Philip Barbour would join them. The new Class AA, also with 28 schools, would see Lincoln, South Harrison and Notre Dame in the mix. The new Class AAAA would feature 28 schools as well with the remaining 37 sitting in Class A.
While this would be a pilot program for two years, if it’s ruled a success there’s a possibility other sports could follow. And if that happens, the postseason will become a mess.
Already, the word is that there will be five days for the state basketball tournament. Not a good thing if you’re Martinsburg and have to travel Tuesday-Thursday-Saturday to Charleston to compete. If it goes to other sports, a complete revamping will need to be done. Already, sports like wrestling in Class AAA had brackets that weren’t complete this year due to not having enough competitors in certain weight classes. Dropping the numbers is going to create postseason issues that can’t fully be addressed on every front until they materialize.
And the potential for other problems exists as well. As much as I want a level playing field to the best that’s possible, think about some of the so-called “super teams” that people say exist in various classes as the result of recruiting at the public and private level. Does this change that? Or does it simply shuffle the deck?
Haven’t you just moved the problem potentially into another classification? If it’s in Class A, is it now a Class AA issue? Could a team move up on their own accord in hoops and cause problems in Class AAA or even a potential new Class AAAA?
I applaud the effort. Trying to make the game as fair as possible is never a bad idea. Even if it works out initially if passed or people come up with future changes to help better insure it, someone will find a way to game the new system(s).
Finding ways to skirt the rules has never changed. There is no proposal out there that can eliminate cheaters.
As for DeMotto, my initial inquiry to him was related to recruiting. Here’s his response on that and the proposal in general.  Whether you agree or disagree, his points hold merit and are worth reading. Take a look to end this blog.
“I can’t speak for others, but this vote would not prevent any rule violation IF rules are being violated and that is not a topic I am willing to discuss.  I worry about BHS.  I did vote no but I would not describe myself as adamantly opposed.  I voted ‘no’ because I don’t think we are big enough for four classes and no matter what you do, you will always have schools at the top of their class and schools at the 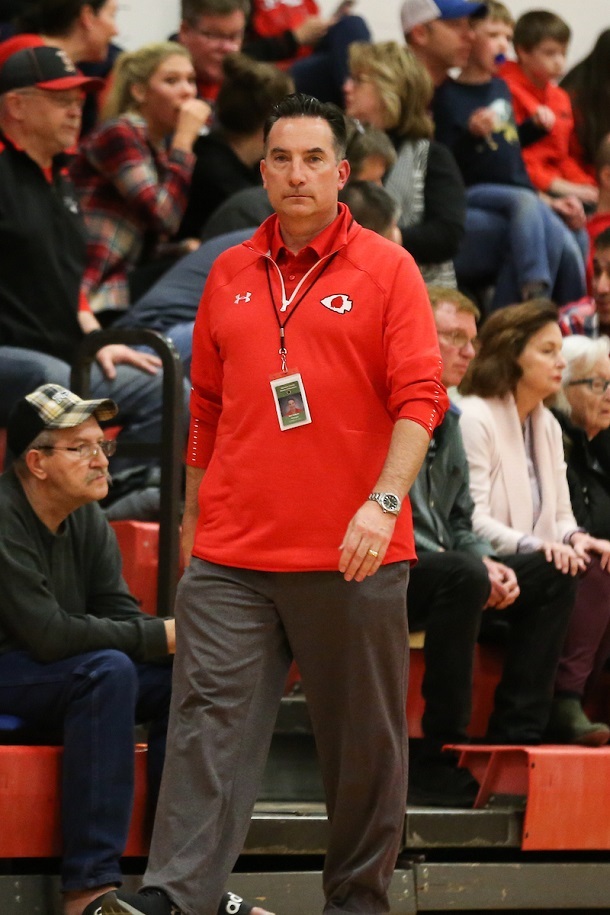 bottom. I may be wrong, and I absolutely get the desire for a competitive balance, but what do you do about a Martinsburg and their football program, which is the dominant program in the state and has been for several years?  Are they placed in a class of one so someone else can have a chance?  Clearly, I’m not serious about that but I’m trying to make a point and the counter point is that we are trying to provide for a better system.  If it clears the final hurdle, hopefully that’s the outcome.  I applaud the process and the desire to make something better, I’m just not sure.
“I attended and graduated from the 10th smallest high school in the state.  It makes athletic success extremely rare and difficult, but when it does happen, it’s more special.  I experienced it.  I guarantee you there are a bunch of boys in Webster County that know how special their recent (boys’ basketball) title is.  I was also the AD at BHS when we were the smallest AAA or among the smallest for eight years and while competitive in most sports, titles were much more difficult to come by.  I understand the desire for something better.  I recall how difficult it is to win a title against schools more than twice your size.  I just worry that we are not a big enough state for four classes especially if this eventually makes its way to our other sports.
“For us at BHS, it will be business as usual.  My vote was not due to what I thought was best for BHS.  Without this proposal passing, we could still end up playing in the largest division anyhow if the SSAC increases the number of AAA schools.  This can happen with or without this experiment.  We understand that you play the hand you’re dealt, and we support the process and will play our hand.
“We also need to understand and remember why we have education-based athletics in the first place.  We all utilize extra-curriculars to enhance our primary mission of educating our students. While I love competition and sports, I am more concerned with our students arriving on time, every day and working to their full academic potential.  We worry about respect for others and If we can use athletics to help us succeed in the classroom, to instill discipline and teach good character then they are worth having regardless of your school’s classification and at the end of the day, this understanding is the most important.”
Editor's Note: Shown after the WVSSAC logo is BHS boys coach Mike Robey and a photo of a huddle from this year's girls team. Both the boys and girls could go up to a new Class AAA classification in 2021 after the state's principals overwhelmingly approved the matter for consideration by the State Board of Education. BHS Principal Matt DeMotto, who voted against it, explains why in the latter part of this blog. Bottom three photos by www.benqueenphotography.com.