From the Bench: Community Group Steps up to Assist with Wonderful Gesture to Handle Pathetic Situation 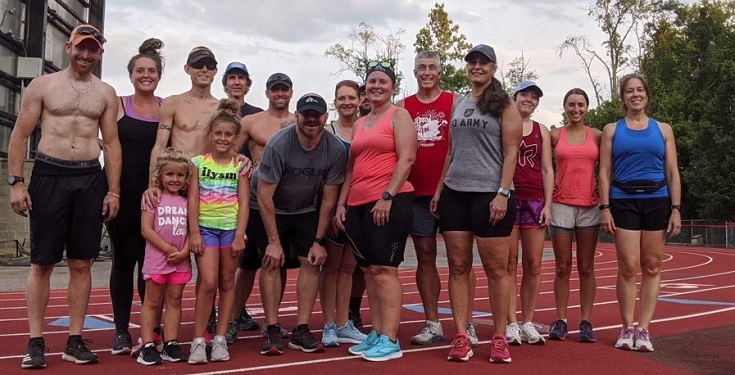 For many that follow running closely in Bridgeport, seeing the local running group – the Bridgeport Road Warriors – at the track portion of the Wayne Jamison Field complex is likely no big deal. Such a situation, for anyone who happened by on August 6, probably did not seem unusual.
For a part of it, it was not different from the past. For part of it, it was different.
What took place was wonderful. The need for it taking place was pathetic. I will get on my soapbox shortly about that. First, the good deed, and a little appreciation from the unofficial caretaker of the Jamison Field track – Coach Jon Griffith.
“Their group use our facility quite a bit and they had noticed there was leftover trash and bottles and took it upon themselves to take a day and pick up everything,” said Griffith, who actually assisted in the group’s forming and still runs their Web site. “They not only picked up 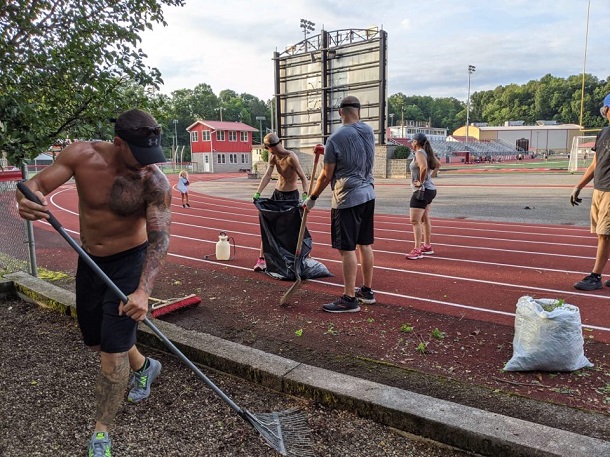 everything, but they brought down leaf blowers, went through weeds and ended up cleaning the entire facility.”
Griffith said he found out about it by seeing posts on social media among the group’s members. The group, which consists of a large portion of runners from Bridgeport and several beyond, were talking about the cleanup when Griffith reached out to them to thank them.
“They just kind of did it,” said Griffith. “Once I saw they were organizing, I let them know how much I appreciate it.”
According to my friend Brian Reider, one of the founding members of the group, it was Travis Yost who organized the cleanup. Reider, unfortunately, has been doing some cleanup prior to the big one earlier this month.
“It was toward the end of July, I was on a run by myself and saw a five or six water bottles along the field and put some gloves on and picked them up,” said Reider. “Then I noticed more around the outside edges of the track. After going around, I checked some areas out and noticed in the bushes there were 20. When I was done, I picked up more than 50 bottles.”
Griffith said he has been aware of issues in the past, but that was always taken care of with the BHS track team’s annual spring cleanup. And nothing has been to the level in recent weeks and the last few months.
“We always do that cleanup with the track programs and the parents association, but COVID wiped out the season, which wiped the cleanup out,” said Griffith. “We’ve been doing summer running, primarily for cross country, but we don’t use the Jamison Field Complex for that very often, so I haven’t seen the facility.” 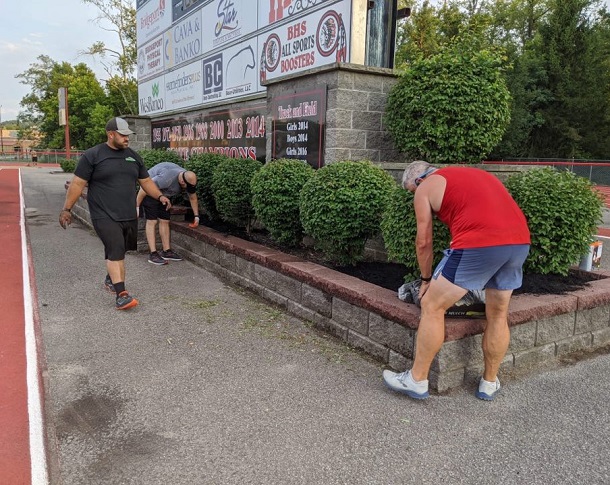 He said he has not been to the field since March. Part of it is that he really has not needed to be there. Part of it, and this is speculation as well, is that it probably was tough mentally to go to a place where you’ve coached decades and had to scrap a season that had the very real potential for another state title.
Had he gone, he would have witnessed what Reider and others in their group had witnessed. And that, unfortunately, was more trash than should be found at a venue such as the Jamison Field track.
“Apparently, it was a bit out of hand. I don’t know who is leaving it behind, whether it is teams that occasionally go there or people just using the track, but it’s a shame,” said Griffith. “If it’s a group, we’ve always asked those groups to be responsible.”
The Bridgeport Road Warriors with Yost setting things up is one of the groups showing their responsibility to a venue they find great value in.
“We had the cleanup day and probably 15 to 20 showed up. We removed some gravel, took leaf blowers and took some donated mulch and put it under the scoreboard,” said Reider. “The football memorial (for Mary Reppert) was covered in weeds and we cleaned that up to 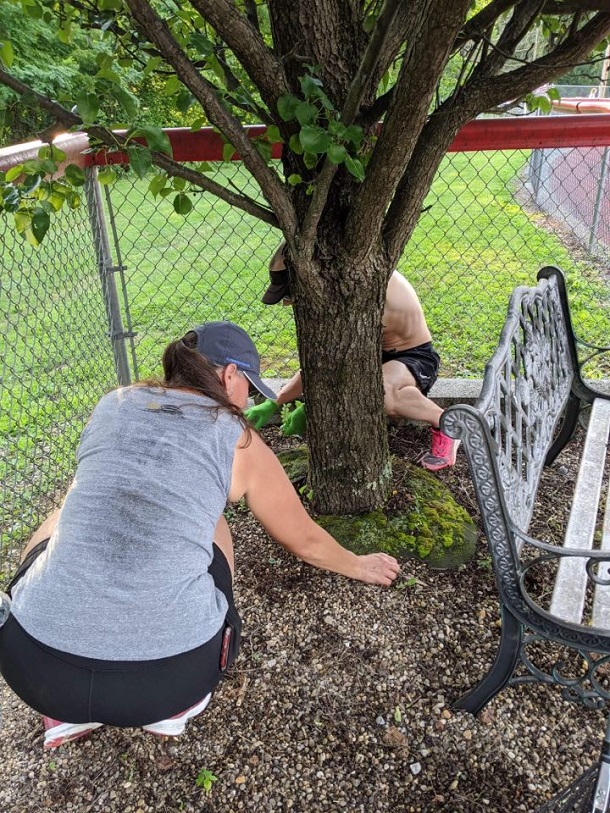 make it look nice. We use this facility frequently and take pride in how it looks.”
Apparently, others do not. And it was not just water bottles.
“We ended up with a few garbage bags full of trash. There were old (face) masks, straws, and water bottles. Just about anything you can think of as trash was there,” said Reider.
That should have been a happy ending once the cleanup day was complete. It was not.
“Twenty-four later and I’m there with my wife and there are water bottles, and Burger King wrappers on the ground with a trash can five feet away,” said Reider. “I don’t know why someone would want to just leave that stuff there.”
Yost himself would encounter more. He posted a photo of additional piles of bottles at the facility days later as well.
Griffith, forever the diplomat, said there were trash cans around the facility that, like many things during the pandemic, did not receive the usual attention and were full. However, he said that has been remedied – and were certainly not full for the following days mentioned above – and agreed with yours truly that full trash cans are not a solid excuse to dump your trash
As mentioned above, it is pathetic the group had to offer the cleanup services beyond the leaf blowing or standard maintenance. Here is a free community venue – ironically paid for initially by the community – that is being trashed up by a handful of those utilizing it.
Again, pathetic, even if the “garbage can was full” line was utilized. If holding an empty water bottle is too difficult, put it near the exit off the track and grab it and take it with you.
I'm not sure who is doing it, but whoever is - or worse if it's a group and a leader is allowing it - should feel about an inch tall for their carelessness. The fact it's happened since the cleanup leads me to believe whoever is responsible believes it is no big deal, or simply an entitlement I am not aware of.
There is no entitlement to litter on the track because of exercise or a full trash can no more than people throwing cigarettes out the window are entitled to dump their waste out because cars are no longer equipped with the old ash trays they had decades ago.
“It was bad seeing the trash initially and it’s bad seeing it even since the cleanup,” said Reider. “We’re not a group looking to place blame because anyone can leave something behind, but to see it continually isn’t just an accident. We’re going to try and do cleanups at least once a month because we appreciate what is there.”
Everyone should be thankful to Yost, Reider and the entire Road Warriors crew. The sad part is no one should have to thank them for something they should not need to be doing.
A wonderful gesture by wonderful people is taking place for all the wrong reasons. All those reasons are, in a word, pathetic.
Editor's Note: Photos show Road Warriors volunteers sprucing up the track and more at the Wayne Jamison Field complex with the top photo showing the majority of those who took part in the good deed. Photos by Alisha Moreno.