From the Bench: Former "Voice of BHS Athletics" Now Silent after Multiple Year Showdown with Cancer

The title of “Voice of the Indians” has belonged to Travis Jones for as long as I can remember, which goes back to the early 1990s. Yet Jones is well aware of another “voice” that was a long-standing part of the Bridgeport High School wilderness.
“For as long as I can remember, and I go back to 1993, that was the voice you heard on the public address system at all home basketball games; definitely going back into the 1990s for sure,” said Jones.
The “voice” in question belonged to Richard S. Bailey – or Mr. Bailey to his students and Rich to many of his friends. As most of you know, 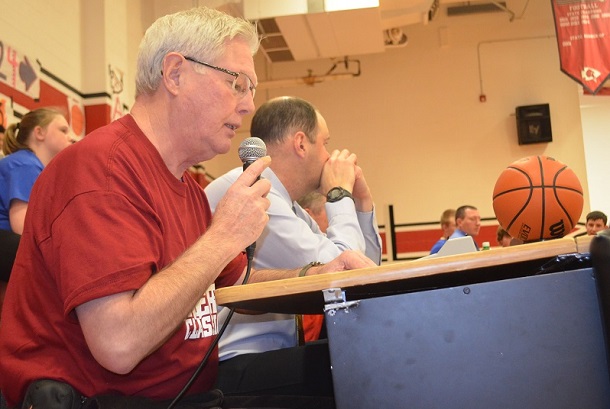 Bailey – who likely started at BHS behind the mic in the mid-1990s – passed away a week ago, on Oct. 10. He had courageously battled cancer for five years.
“First and foremost, you could tell just by listening to him the amount of passion he put into handling the public address duties, you could hear his excitement and enthusiasm in his voice,” said Jones. “I think the reason for that was he appreciate effort of all the young people he announced, he enjoyed being around young people, and he enjoyed the atmosphere.”
Jones is correct. I had the privilege of actually watching Bailey when he handled many of the same chores for basketball at Lincoln High School. His enthusiasm was just as high. His long-time friend Hugh Gainer said Bailey also announced volleyball games for BHS.
The reason in my thought process is simple. Richard Bailey taught at those same schools he announced at. He not only called the kids’ names, but he knew them personally. While Travis Jones does not teach, he is so deeply involved with the programs that he knows the students as well and it – without even trying – just naturally produces a better experience for the person listening.
“He did it because of teaching and it’s becoming a rarity for someone to commit to something of that nature for so long when you don’t have your own children involved. Mr. Bailey had no personal ties other than they were his kids at school every day,” said Jones. “You have to love it because, at times, it is a four-night a week commitment. I don’t remember him missing many games, if any, during my time there and that speaks to his enthusiasm and his love for the school.”
Nothing showed his love more than in 2016 when Bailey, who I’m not certain if his health issues were disclosed at the time, began grooming a replacement. The replacement was actually a freshman at BHS – Caden Shmigalsky. 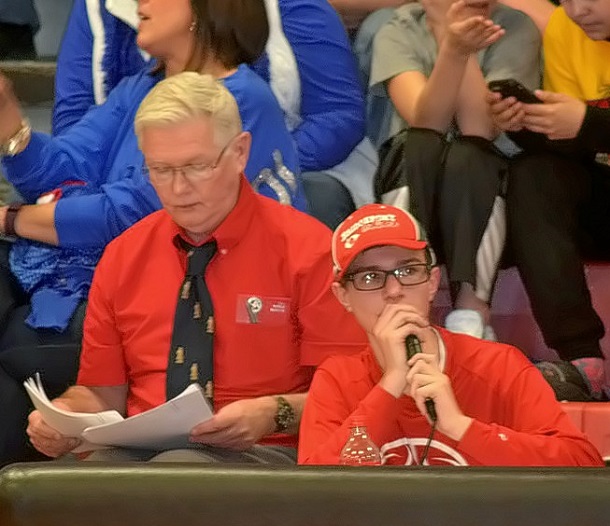 “I just wanted to operate the clock and he got me doing PA work, and if you knew him you felt obligated to accept the offer because he was the type of person you didn’t want to disappoint,” said Shmigalsky. “He gave me freedom and the friendliest advice. That first year, halfway through it, he eventually let me do the jayvee stuff and I would sit and watch the varsity games to learn from him.”
Eventually, Shmigalsky replaced Bailey as his health decline. And eventually Shmigalsky himself left to continue at higher levels.
He’s taken those lessons learned and is progressing up the ladder on the collegiate athletics front. He’s also taken something else that anyone whoever encountered Bailey knows to be true.
“He was so humble, kind and experienced, which always made an impression on me,” Shmigalsky said. “I don’t know if I ever saw him treating anyone with disrespect. When you’re that age, it leaves an impression on you that you should treat people well.”
Jones didn’t disagree.
“When I think of him, I just know he was a very friendly man who absolutely loved this school. He was Bridgeport through and through,” said Jones. “He loved being here and always had a smile on his face when he was here. He certainly is a big part of a lot of great moments in that gymnasium and I know a lot of people will miss him.”
Rest in Peace Richard. Your work here is done.

Jeff: A fine story on Coach Rich Bailey. He was always so busy with his announcing and all he did at BHS. I might be wrong, but also thought he did some volleyball. He always gave his time where ever needed. The many years at Lincoln as teacher, Coach of The golf, and boys and girls tennis teams. I believed, announced at Lincoln for many years. Rich will be missed and always remembered by all who knew this fine man. Hugh Gainer