Long before he turned the ripe old age of 17 and well before he was an official member of the Bridgeport High School varsity football team, Cameron Jones had spent years prepping himself for the moment when he would play for the Indians in a critical time.
That time arrived Nov. 6. 2020. It was the playoffs, and the Indians were going up against Morgantown during what would turn out to be a season ended early due to COVID.
“The Morgantown game was the game I got my first varsity start on kickoff return and I was getting a ton of time in practice and repping 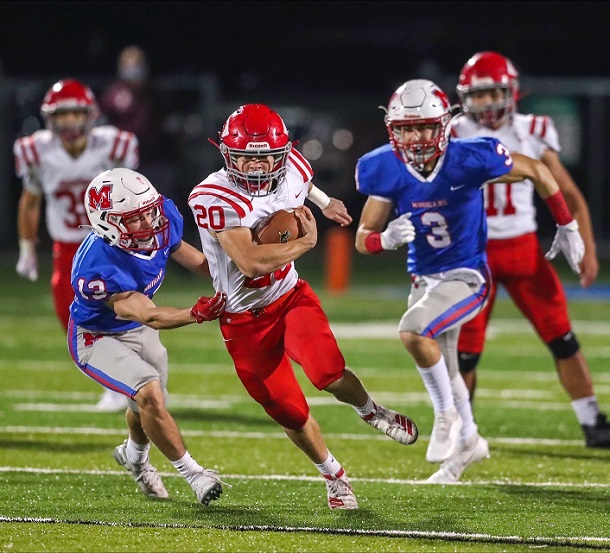 with a lot of the first team,” said Jones, the son of Travis and Kristi Jones. “As excited as I was, I was just in tremendous pain that entire week of practice.
“I can remember in practice thinking something was seriously wrong,” Jones continued. “I had played through similar pain before and, looking back, that was the wrong thing to do, but this pain was, for lack of a better term, excruciating.”
The good news was Bridgeport beat Morgantown 42-7. More good news came the following week as Jones played again in a 55-7 win against Washington on kickoff and on defense. The bad news was Cameron Jones had played not only his last football game for the year, but his last football game ever.
“I downplayed the pain and I only expressed to my mom I was having pain, but she didn’t know how bad,” said Jones.
Jones was having pain in his hips. He was having pain in his groin. It was so bad it was radiating into his pubic bone area.
“I was wrong not telling my mom how bad it was. I just didn’t give her a complete idea,” said Jones, “even though I didn’t know how bad 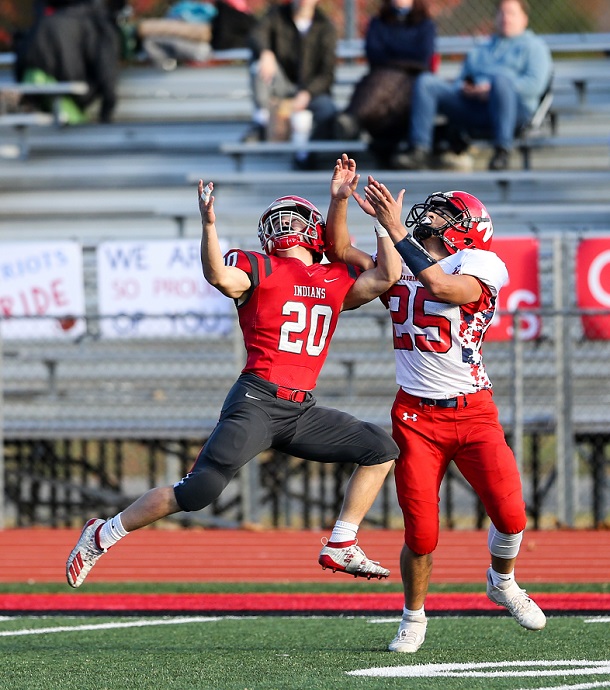 things were at the time.”
That time would come after the Martinsburg game was canceled two weeks later in the Class AAA semifinals. Jones knew he needed to address a problem that was worse than anything he had dealt with in years of athletics.
Determining the exact problem would take time. Fixing the problem would take longer. And it has already led to multiple surgeries and the end of his high school athletic career with his senior year still ahead of him.
Jones would find out he had a deformation in his hip joints. He said he was likely born with it, and unfortunately, the problems with the hip joints led to something else – two sports hernias.
“There isn’t an exact timeline, but it’s a domino effect. The hernias are directly related to the hip injuries,” said Jones.
The hip issues may have been there from birth, but the problems began back in the fifth grade. He started having hip flexor problems along with oblique muscle issues. He went to therapy and since the pain was bearable the thought was his growth, physically as well as adding muscle mass to his body and not properly stretching, was the issue.
It was not the case. It was his hips causing the issues that would lead to others. And after the 2020 season ended, he knew it was time for help.
Help started with Dr. Kelly Nelson. Jones, who likes to stay on top of things regardless of the situation, had researched his symptoms. He though he had an inguinal hernia, which is a common hernia that can be addressed and recovered from somewhat easily.
“As I would learn, that process would have been a cakewalk,” said Jones. “Kelly said it was a good chance I had a hernia, but after waiting a bit the pain got to a point that he referenced me to Dr. (Aaron) Mares.”
Mares is a Pittsburgh Steelers team doctor, but before that Jones was working the local therapists Jack Spatafore and Ginny Vincent. 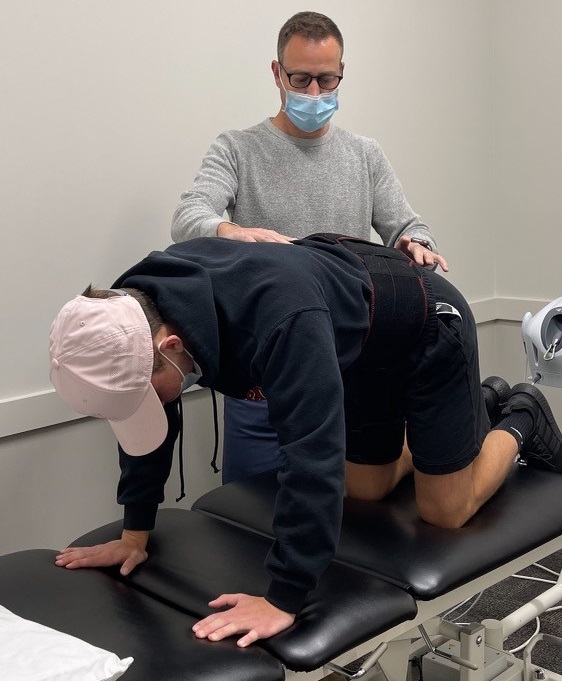 Vincent suggested the issue causing all the problems may be a labrum tear. Spatafore agreed.
“We brought that up to Dr. Mares and he said it every well could be the case and he explained what that could entail, and it was kind of brutal,” said Jones. “From there, he sent me to two specialists.”
The specialists were Dr. Dharmesh Vyas, the Pittsburgh Penguins orthopedic surgeon, and Dr. Brian Scott Zuckerbraun, a general and trauma surgeon for the Steelers. From there, the pair worked with Jones for a clinical diagnosis of the sports hernia, and an MRI of his right hip – the one causing him the most pain – to determine the problem there.
“The MRI came back and told us there was an impingement in the hip as well as a two-centimeter full thickness labrum tear,” said Jones. “It wasn’t great news.”
Vyas said conservative therapy was an option. However, Jones had been doing that with no relief. And the possibility of injections would only mask the pain and do further damage.
The decision? Surgery. Actually, three surgeries in one day.
On Oct. 25, 2021, at the University of Pittsburgh Medical Center, his right hip would be repaired arthroscopically by Vyas as the labrum was fixed and the areas inside cleaned and repaired. After that, Zuckerbraun did the sports hernia surgeries.
He was not finished. Last month, on April 4, was surgery number four on his other hip.
“Things are going pretty well with my hips,” said Jones. “What’s amazing is how smooth everything feels. All of those years I had bad hips but didn’t know it because what I felt just felt natural to me.”
The hips have responded to natural healing and therapy three times a week. He has also been icing his body where needed and 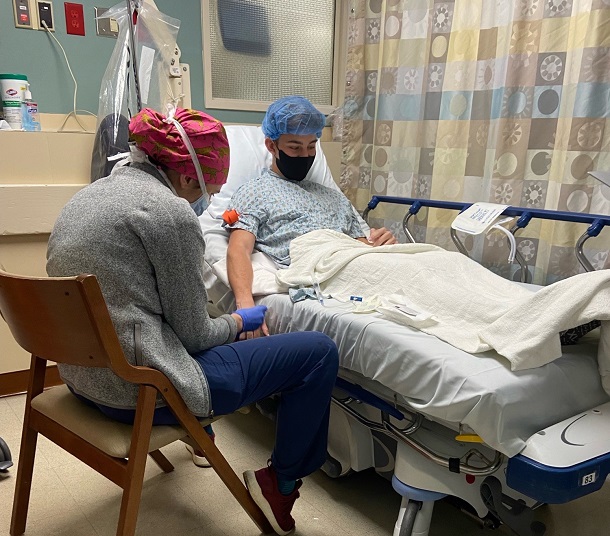 stretching.
That has been the good news. In this case, there was soon to be more unwelcome news when it does not seem more is warranted.
“I have more pain in my right groin. I’m getting an MRI ordered by Dr. Vyas June 17 that will give us an idea of how well my groin took the surgery,” said Jones, who said there is limited pain in the left groin as well. “He is sending me to a different guy in Philadelphia, a specialist for this exact injury. There is a possibility of needing more surgery.”
That day, June 17, will do a lot to determine the future as it relates to injury. As for his future in sports, Jones knows it is over. And in many ways, it is a hard pill to swallow.
“I guess it didn’t register until football started lifting again. I’m 17 so I haven’t had most of the experiences I’m going to have in life, but this has been a difficult one to deal with,” Jones said. “Losing sports, which I had done my whole life and knew was likely ending competitively for me in high school regardless, was the nail in the coffin of what’s just been an ongoing bad experience.”
He also had to deal with something else. The young man who became obsessed with working out and staying in shape, could no longer do that. And he could not ignore it.
“I was in the gym six days a week and the gym, although a cliché, became a lifestyle and I had to give it up,” he said. “I look in the mirror and see myself getting smaller and losing weight. That’s been as difficult as anything in a period of time where there have been a lot of difficult things.”
Here is where the story takes a positive turn when it seems like one is not available. It would not be available without a strong mindset of a young man not even old enough to vote.
Besides donning the red and white of BHS, Jones has had another childhood goal that continued through his school years. 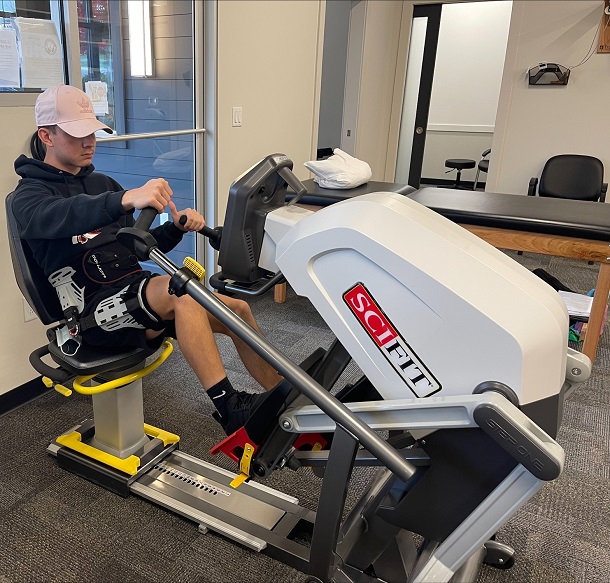 That goal involves serving his country in the United States Air Force.
“For as long as I remember, I’ve wanted to be part of the Air Force Pararescue squad,” said Jones of the elite branch of the military that requires up to two years or rigorous training. “This is my dream.”
Pararescue members are highly trained parachutists, scuba divers and rock climbers who rescue Airmen in any environment.
Jones can get there, but if he enlists out of high school, he has to be medically cleared. Right now, that is not a certainty. If he is cleared, even though he can request the specialization and get through a myriad of steps educationally and physically needed to do the job, as an enlisted military member he could be steered in another direction if needed.
The other option, if unable to get medically better by the time he would need to enlist, is to enroll at West Virginia University and enter the school’s ROTC program. And he could go this route even if medically cleared.
As is always the case, Jones has done his research. In this particular case, he has talked to a combat officer who went the route of WVU and the ROTC. Coming out of that, you would be considered a combat resource officer, which Jones said is essentially the same position as being a member of Pararescue.
“You go this route, you meet all of the requirements, and you are in the position,” said Jones. “There are still a lot of things in the air, but I’m pretty confident I’m going to get where I want to be.”
Jones should be confident, and not just based on his work ethic. If anyone deserves to get to where they want to be through arduous work, it is Cameron Jones.
Editor's Note: Top photo shows Cameron Jones returning a kick vs. Morgantown, while he's shown defending a pass against Washington it what would be the final two games he would dress up for BHS in photos by Ben Queen Photography. Third photo shows Jones working with Jack Spatafore of Bridgeport Physical Therapy, while he's shown working on his own in therapy in the bottom photo. The fourth photo shows Jones during one of his four surgery procedures at UPMC in Pittsburgh. Final three photos courtesy of Travis and Kristi Jones.