From the Bench: In Case You Missed it, Rewinding to Moment Affirming BHS as Top Program in Class AA 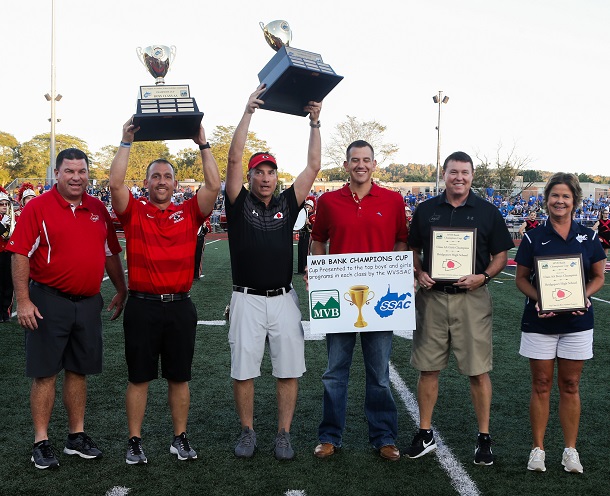 honor under the umbrella of the WVSSAC. The award recognizes the top girls’ and boys’ athletic program in Class AAA, Class AA and Class A.
Two years the award has been out. Two years in a row Bridgeport has swept both sides of the gender ledger.
This past year also marked the seventh straight year that Bridgeport’s entire sports program was named tops in all of West Virginia in Class AA by the Charleston Gazette Mail. Like the MVB Award, nothing to sneeze at when looking at the overall success of the Indians’ and their programs.
Not that the Gazette-Mail honor is any less significant, but what makes the administration at Bridgeport High School smile just a bit more with this honor is that it has an academic component relating to graduation rates. In other words, it’s got a little bit of a student-athlete flavor to it.
Bridgeport Assistant Principal and Athletic Director Mark Jones said the combination can not be overlooked. In fact, he is adamant academics are the key reason that Bridgeport has enjoyed athletic success at high levels for so long.
“There’s a tradition here with sports that everyone knows about, but I think those who pay attention know we have a tradition of academic success as well,” said Jones. “They go hand in hand. You want to guarantee you’ve got a chance to be successful in athletics it’s a lot easier when you’re having a lot of success in the classroom.”
We’ll get back to the classroom here in a minute. In this showcase, the Bridgeport boys edged out Fairmont Senior in an extremely close boys’ division. The Indians, thanks to their state title in baseball, climbed past the Polar Bears with 667 points to 662.

Things weren't nearly as close for the girls. Bridgeport dominated to the tune of 853 points. Winfield was a distant second with 676 points.
This year, the Tribe captured three state championships. BHS won the baseball and boys swimming titles, while the girls brought home the school's first-ever volleyball championship.
“To do what was done last year and over the long haul is a testament to all parties involved – starting with the students,” said Jones. “Then you look at the stakeholders, this community, and they always put the young students as top priority that allows for a better learning environment.”
Jones wasn’t done. He talked about parents being involved and a staff of educators that expects the same level of success once taking a seat in their respective classes that coaches expect on the various playing fields.
“The expectations start from the top and go down. Who you want to put at the top really doesn’t matter, but the expectation by the teachers is always success down to the students and back at home,” said Jones. “It’s hard to argue, based on the results that aren’t just a sample size, that it translates to accomplishments on the field as well.”
On 9-9-19, the accomplishments were formally recognized. Officials from the WVSSAC, including Executive Director Bernie Dolan, and representatives from MVB Bank were on hand to make the formal presentation. Jones said the excitement between himself and Principal Matt DeMotto as they hoisted the trophies in the air was legitimate and a moment of pride for the students who made it happen with a support system aimed and making it happen.
“The trophy serves as a symbol of the hard work that it put in by the students that our fans and any visitors to the school can see,” said Jones. “it’s a testament to the vision on the athletic fields, the classrooms and the extracurricular front in all aspects. This is something all of Bridgeport should be proud of because it was earned the correct way.”
Editor's Note: Assistant Principal Mark Jones, second from left, and Principal Matt DeMotto, hold up the trophies showing the top Class AA programs in the state are from Bridgeport High School after the 2018-19 school calendar year. The Indians were successful in multiple sports and took home three state titles last year including volleyball, boys swimming and baseball. Photos by www.benqueenphotography.com.