From the Bench: Indians' Football Secret Weapon is Back Again for 2022 and This Year it Comes as a Trio

There are few things that provide relief from the grinding heat at an August football practice. For Bridgeport Coach Tyler Phares, one of those things is seeing a few seniors come out for their first year of football.
“Every year, it never fails, someone comes out as a senior and helps the team,” said Phares. “It isn’t always someone like Aidan Paulsen, but sometimes it’s a special teams guy, a defensive player that steps up or someone that provides depth. No matter what, we welcome them, and it has always paid dividends.” 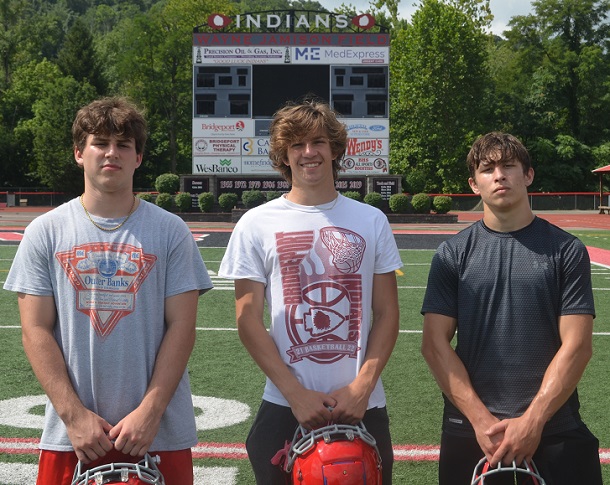 Last year, it was Paulsen who showed up in his first year as an Indian at Wayne Jamison Field. And the results were better than expected. Paulsen led the Indians with four interceptions to go along with 65 tackles and was an effective option on offense finishing with 627 rushing yards and 10 touchdowns.
Along the way, he earned second team Class AAA all-state honors and was chosen to the North-South football game. Not too shabby for one year one under his football belt.
Paulsen has had company. From guys like Chris Liebig, John Koon, Ryan Sprouse, and more, first-year seniors have played a vital role in many successful Bridgeport teams.
“We hope that is the case this year,” said Phares. “We hope the success continues.”
This year, the Tribe has three seniors getting reps for the first time, including two who are playing organized football for basically the first time. One of those is senior Josh Jackson, and if the name sounds familiar for BHS sports followers, it should.
“I’ve always liked hitting people and this is something new from a new sport to a new environment,” said Jackson, who said he once played about a half a season of Pee Wee football. “… I have played 14 years of soccer, and this is officially my first year of football.”
Phares said Jackson brings a commodity that is always needed by the BHS team – speed. The coach said they will find a way to utilize that speed.
“He is really fast with good feet that is a result of him being a soccer player,” said Phares of Jackson, who said he will no longer be playing soccer. “I can see him contributing on special teams and defense and maybe even the offensive side. The offense is always the hardest 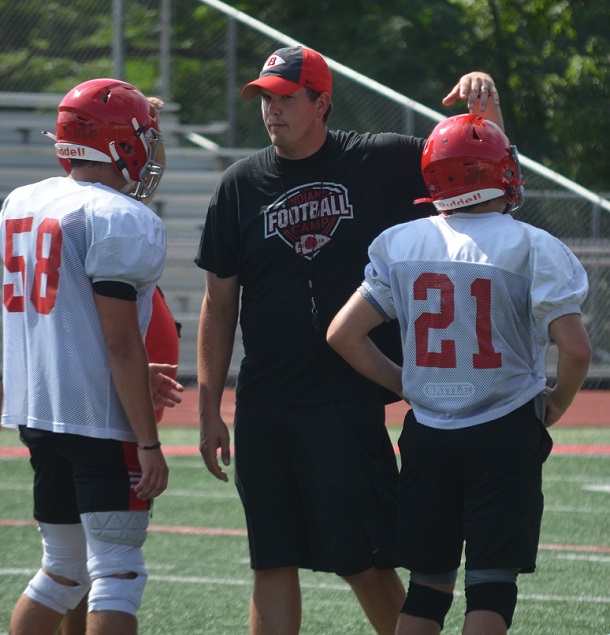 part to get down for the newcomers.
“Josh’s speed sets him apart, and it’s always welcome on the football field,” Phares continued. “We’ve always got a lot of grinders so anyone with speed, especially at Bridgeport, is going to figure into things.”
One of the seniors out does have a background in the sport, but it goes back several years. However, that does not mean he is not welcome to be on board. In fact, senior Sam Coburn could provide the program with a boost at a couple of areas that will welcome it.
“My freshman year, and even in middle school, I had trouble with injuries, and I decided it wasn’t for me. This year, as a senior, I really want to showcase what I can do and hit, which is why I joined,” said Coburn. “… I’m excited.”
Ironically, Coburn was sitting out practices this week as he deals with a high ankle sprain. Jackson, too, was out of action nursing a dislocated shoulder. Coburn expects to be back in a week, two at the longest, while Jackson said he could be cleared at any time with the maximum time out he believes being a week.
“Sam is physical and strong, and I could see him at linebacker, maybe defensive end or a blocker out of the backfield,” said Phares. “Maybe he’s the guy to get some tough yardage when needed because, just like speed, big and strong kids are always welcome here.
“The big thing is he can give us depth, but he’s been battling the ankle injury,” Phares continued. “We’re excited to see what he can do in camp.”
As for the third player, it was a big surprise in form of the late arrival of senior Brody Carnes. While Carnes may be a stranger to football, 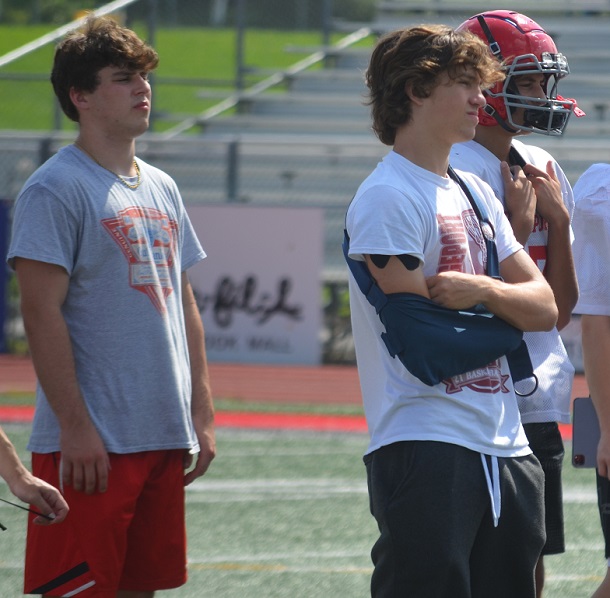 he is no stranger to the heat that greeted him in practice. The senior has faced it before as a member of the Tribe’s wrestling program.
Now, he is looking to lend his skills to the football team.
“I thought it would be something fun to do. I’ve always wanted to play high school football, and haven’t been able to until this year,” said Carnes, who said his family was hesitant about him participating in the sport. “I’m hoping wrestling will help because I haven’t played football before; just wrestling and lacrosse.”
Phares has no idea what Carnes will eventually bring to the team, but he has been around long enough to know wrestlers typically make good football players.
“He showed up (Tuesday). What a welcome surprise,” said Phares, who said Carnes’ body type lends him to a linebacker or running back position. “We know how good of a wrestler and an athlete he is, but we’re really excited to see what he can do when he gets the pads on.
“He’s a physical kid, which I’ve seen by watching him wrestle,” Phares continued. “He’s going to fit in somewhere and I can assure you as a wrestler he’s coming into practice in a lot better shape than the majority of the team. We’ll find a place for him.”
Editor's Note: Top photo shows, from left, Sam Coburn, Josh Jackson, and Brody Carnes. Second photo shows Coach Tyler Phares during a practice sessions, while Coburn, left, and Jackson are shown observing practice this week while working to overcome injuries.