By Jeff Toquinto on February 23, 2020 from Sports Blog

Maybe bad luck and bad news does come in groups of three. If anyone wants a case study example, look no further than the Bridgeport High School wrestling team to perhaps validate it.
We’ve told you about senior Addison Courtney having to step down from the sport earlier this year due to ongoing and lifelong medical problems after what he hoped would be a senior season ending at the state tournament. 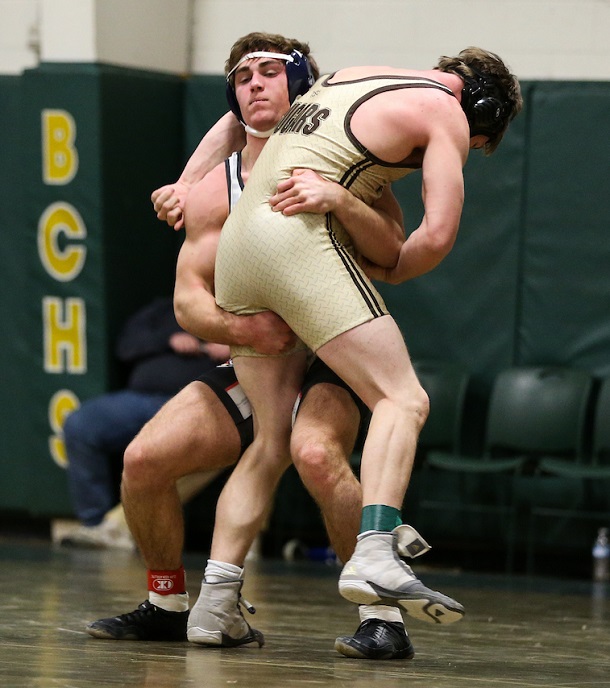 We’ve told you about senior Josh Wojciehowicz, who like Courtney was looking to a promising senior season to end before it ever started. He was injured with one second left in the Class AA state title football game with a broken fibula.
It seemed not much worse could happen. After all, along with injuries, the team has battled a plethora of illness all year. Much worse didn’t seem likely, right?
Sadly, wrong. When Bridgeport heads to Huntington next week with a group of wrestlers looking to bring home state titles, one wrestler expected to be in the mix won’t be.
Unfortunately for JT Muller, a year after finishing in fifth place – one place for qualifying for the state tournament – a season ago, the goal was simple. Qualify at the Region II meet and get to Huntington to compete for a state title.
All of that was going well heading into regional action Feb. 14. In fact, things were even going well as the first match in the 170-pound 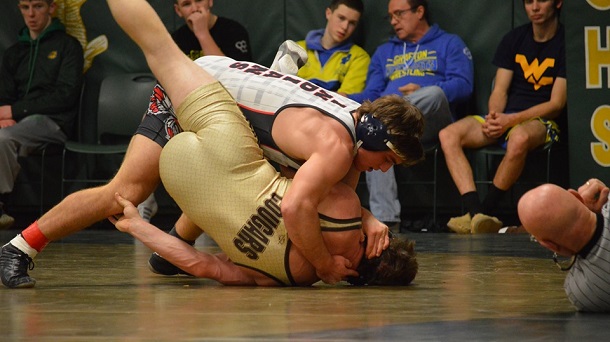 classification was going Muller’s way.
“In that first match I was winning 7-2 in the third period and got stood up and returned to the mat. I landed on my head and, at first, I was just stunned,” said Muller. “I knew I was on my back and then I got pinned.”
Muller laid there for a second. Then his coach, Chris Courtney who doubles as a surgeon on the side at United Hospital Center, checked out Muller.
Understand, Muller was already suffering from the leftover symptoms of the flu, particularly congestion, that had him competing at less than 100 percent and had been ill mulitple times this season. Courtney was checking for symptoms – and Muller had them. Unfortunately, Courtney wasn’t checking for flu symptoms.
“I had the symptoms of a concussion. I had an immediate headache that wouldn’t go away so the thought was maybe it wouldn’t be a good idea to go on,” said Muller. 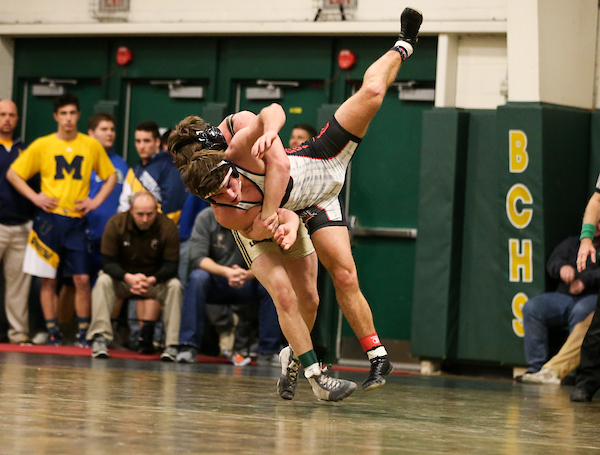 Although his mother Jodi said he ended up not being concussed, the risk was too great. Courtney realized and, more importantly despite his young age, Muller eventually realized it too.
Just like that, Muller’s junior season on the mat was over. Once again, it ended short of the state meet in regional competition.
“I was very disappointed; just wasn’t happy at all,” said Muller. “I was telling myself to get ready to go back out and that wasn’t going to end it like that, but the headache persisted. I knew it was over.”
Courtney said it was another tough pill for the team to swallow.
“This has been a tough season.  Losing senior leadership with Addison and Josh was tough enough. The illness we suffered this year caused close to a 30 percent on average missed practices. When the practice room is limited with competition, our performance in the mat will be limited,” said Courtney. “JT is a case in point. He was ill three different times this season following the conclusion of football.
“Despite this, his performance on the mat was improving significantly.  He became a sponge and was taking in what we were teaching and applying it with great success,” the coach continued. “Even though he missed the conference tournament and only practiced twice prior to 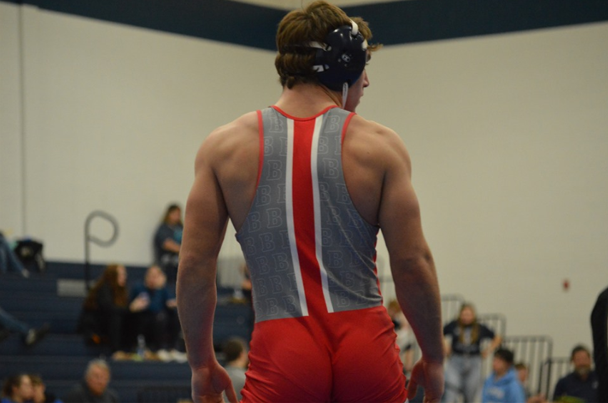 regionals we liked his chances to advance to states.  I was deeply saddened after his first match in regionals … I knew his run was over for this year.”
The good news is that the goal remains. Muller will return for his senior season to a sport he’s loved for some time now.
“I started wrestling in the seventh grade at the middle school,” he said. “I wanted to wrestle because my brother wrestled, and I enjoyed the competitive nature of it. It’s one on one and you either win or lose. You can’t blame anyone else. It’s all on you and that drew me to wanting to wrestle.”
And that’s what he did. Of course, getting into wrestling isn’t necessarily the same as every other sport. Not that other sports aren’t demanding, but the conditioning and discipline for wrestling – and being able to handle the smell of any high school wrestling room for that matter – is why I’ve always said it’s the most demanding sport anyone can compete in. 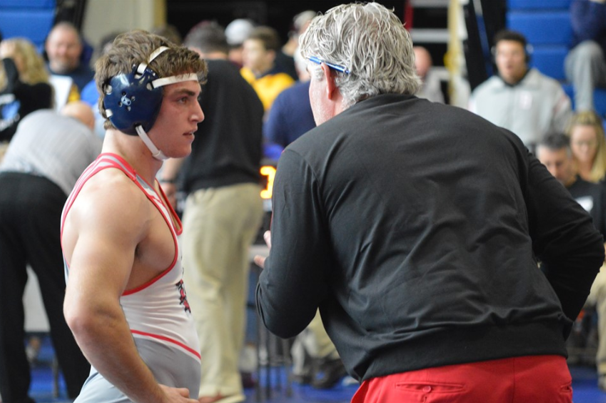 Muller knew it then.  He knows it now. It’s part of the reason the season-ending injury was so difficult.
“Wrestling becomes a lifestyle and you at times don’t have time for anything else. You get in that gym and your focus is 100 percent on wrestling and when you’re out of there your focus is on it,” said Muller.
For those not knowing, wrestlers don’t just have to be mindful during practice sessions to prepare. They need to maintain a diet allowing them to maintain weight. They need to sleep properly so their bodies are in order. In a nutshell, they need time management skills all day, every day in order to better their chances at being successful.
Muller was doing that. In fact, at one many may argue is the most competitive regular season meet of the year – The Winner’s Choice Meet featuring primarily Class AAA wrestlers as well as the best from several other states – Muller made it to the podium at 170. He finished fifth. 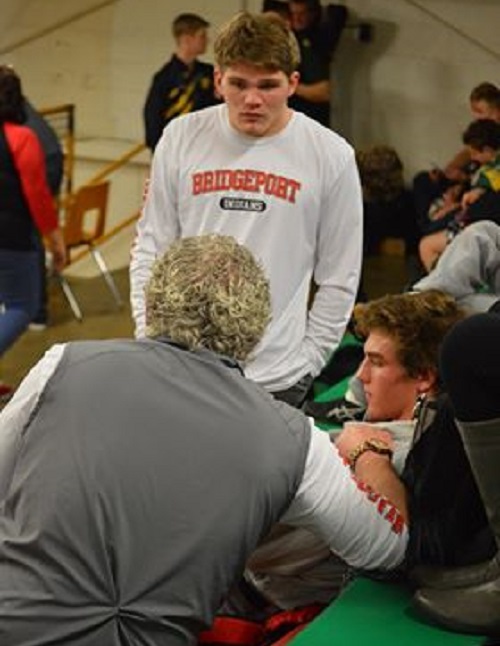 “That let me know if I kept working hard, I could reach my goals and do well at the state meet,” said Muller. “I just needed for things to go my way.”
They wouldn’t. Muller missed the last regular season tournament prior to regionals due to the flu that “left me a bit out of shape” and then disaster struck at the regionals.
Instead of moping about it, Muller is already focusing on helping his teammates at the state meet. He plans on getting ready for next year by stepping up his offseason conditioning for football.
“I plan on gaining weight and lifting in the offseason for football,” said Muller, who said he’ll see where the workouts take him as far as what weight class he’ll wrestle in next year. “I’ll do what I can to make sure I get to where I need to be and hope I can avoid a situation like this again.”
That seems only fair. Bridgeport used up its allotment of bad situations for 10 seasons this year.
And the coach believes avoiding more bad luck and hard work by Muller will pay off in the end.
“JT is a key part of this team. He is one of two juniors. He was a leader and good role model,” said Courtney. “I really hope JT continues with wrestling in the offseason. I know he has the potential to be a two-sport state champion.”
Editor's Note: Top three photos (first and third by Joey Signorelli of www.benqueenphotography.com) are from JT Muller's last match this year. The third photo is just before Muller hits his head on the mat. Fourth photo shows Muller preparing for a match earlier this year, while he gets some regular season advice from Coach Chris Courtney in the fifth picture. In the bottom photo, Courtney tries to console Muller - sitting - while his teammate Addison Courtney, whose season ended due to injury, looks on and provides support. All additional photos by Jodi Romeo Muller.