ToquiNotes: From Addiction to Recovery to Ministry, Bridgeport's Ben Randolph's Story One of Redemption

Bridgeport’s Ben Randolph certainly seemed like he had it all. He had married his high school sweetheart that he first met at the Bridgeport Country Club during her lifeguard days.
Randolph, who came to this city while in the fourth grade, graduated from Bridgeport High in 1999. Graduated a few years later from WVU with a degree in finance from WVU and then earned his MBA from the same university. 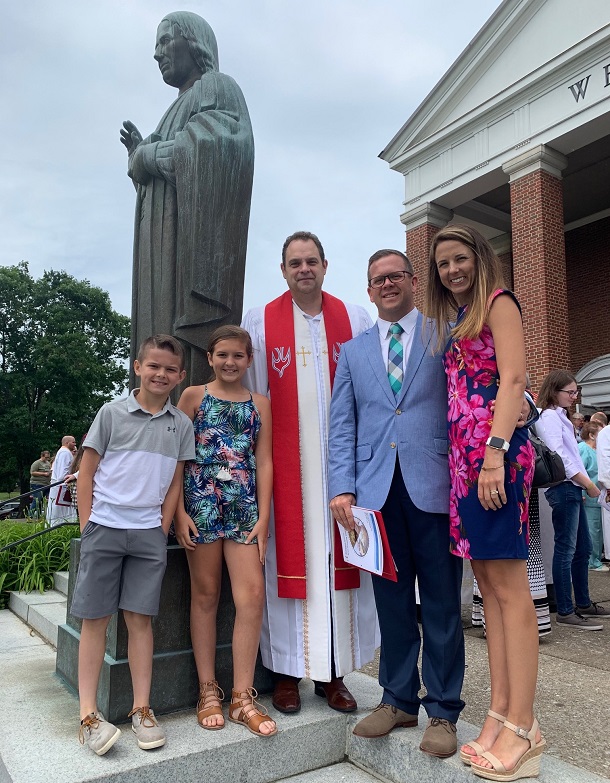 Things kept getting better. In 2005 he wed that high school sweetheart, Christa, and they started a family. They had two children who today are Taylor, 10, and Alex, 8, both students at Simpson Elementary
To cap it off, he had a great start to his career post college.
“I was working for a regional communication company and was successful in sales and had elevated myself to vice president of a division in that company,” said Randolph. “To the naked eye I was the American dream from the 4.0 high school student, the successful and fun-loving college student and a man with a growing family and a career.”
That was the exterior everyone that knew Randolph saw. Everything, it seemed, was picture perfect.
“I worked to maintain that exterior,” said Randolph.
Picture perfect? It was a façade. And it was a façade that nearly left Randolph’s American dream a nightmare. As we move forward, you’ll see while there were times where Randolph’s life actually spiraled into a nightmare but – in the end – it proves to be a story of redemption, recovery and faith.
Ben Randolph, just a few short years ago, was an addict. Not heroin, bath salts or others that many read about, but the drug that often gets individuals hooked on those street drugs. Ben Randolph was addicted to pain medicine.
“In high school and college, I experimented with various drugs (mainly marijuana) and alcohol and was part of the party scene. People 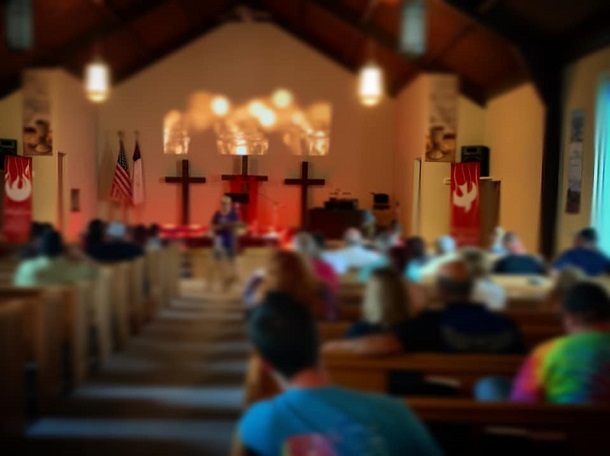 often would just call that boys being boys, but it wasn’t good for me,” said Randolph. “I didn’t realize the impact wanting to be part of that scene would have on me until I was graduating college in 2003.”
At about the same time he would receive his diploma, Randolph had evasive surgery to repair his left kidney at the Cleveland Clinic. While the kidney surgery may have been a lifesaver, there was a part of it that led him to a path that nearly ended it.
“That began my steady stream of narcotic pain medications that I thought I could manage, but it didn’t stop there,” he said. “The odd thing was I transitioned out of alcohol and marijuana because I knew I had to maintain my chance at a career and couldn’t be a pothead or an alcoholic. The pills were the outlet to make myself feel better.”
And thus, it began with the escalation of the use of substances for pain of any kind.
“That surgery was the catapult event that took me down a path that applied to me. Honestly, who would believe it? Here was a well-educated young man with a father being involved as a law man … a mother who was a successful business woman herself,” said 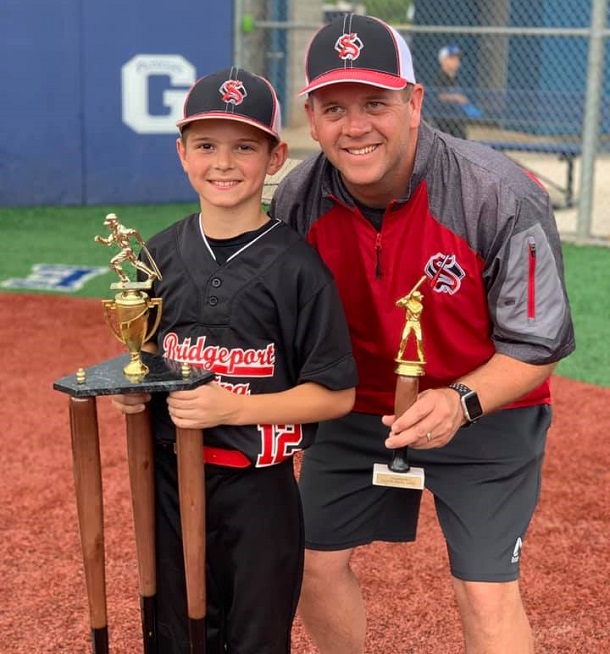 Randolph. “I didn’t think addiction applied to me. I fell for that line of thinking that I didn’t fit the demographic. The reality is there is no demographic.”
The process was slow, gradual and then constant. It continued for years. When the day came where he knew he couldn’t feel any sicker abusing painkillers by doing what he was doing he knew there was an issue.
“I was sick. I was an addict and there is a certain level of shame there constantly as well. There was also a great deal of denial. I didn’t want to face the music because I was certain I could stop this on my own,” said Randolph. “That turns into a repeat cycle because I can’t tell you how many times I told myself this is my last time using or buying. Thanks be to God the only positive through that entire time is I never got mixed up in street drugs.”
Randolph, eventually, hit rock bottom. Financially, his addiction was no longer sustainable. And he did what so many addicts eventually do.
“I took advantage of good friends and places that meant a lot to me and those friends and places still do to this day. The sad thing was I wasn’t being a good friend or steward and I got caught,” said Randolph. “When I was caught, I felt devastated and there was to be no 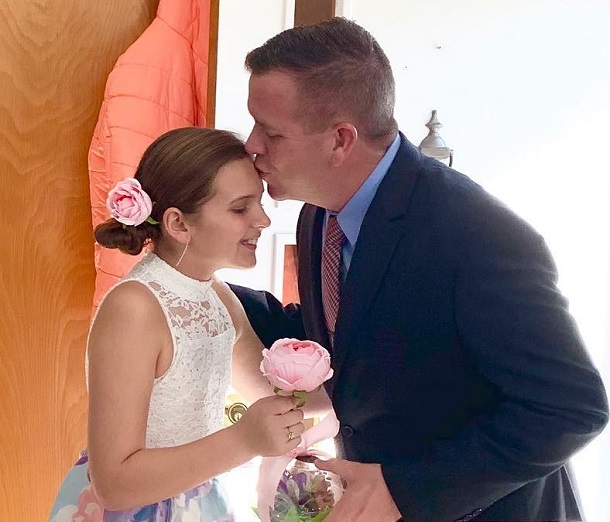 future, but it turned out that it was the best thing that ever happened to me.”
Getting caught meant facing the music. The music came in the form to tell his wife – the mother of his children and his best friend – what he had done and what he had been doing and hiding.
“She loved me regardless, but it was incredibly devastating to her. Putting her and our family name in the public eye had shame attached to it that I still struggle with,” said Randolph. “I needed to earn her forgiveness and trust and put action where my mouth was because there was no reason for her to believe me when I said I would change my life. Saying that to her as I had said it to myself so many times was a dime a dozen.”
This time, however, it would be different. In May of 2015 Ben Randolph did more than mentally tell himself enough was enough. He told himself physically it was over. And thus, another journey began. It was brutal.
“In terms of the actual sickness as the result of withdrawal is the type of misery I wouldn’t wish on my worst enemy. It was a few weeks of intense misery,” he said. “It’s the flu times 1,000.”
A month later, Randolph began to find the calm the path to sobriety provides. He not only felt better physically, but felt he had value. A big 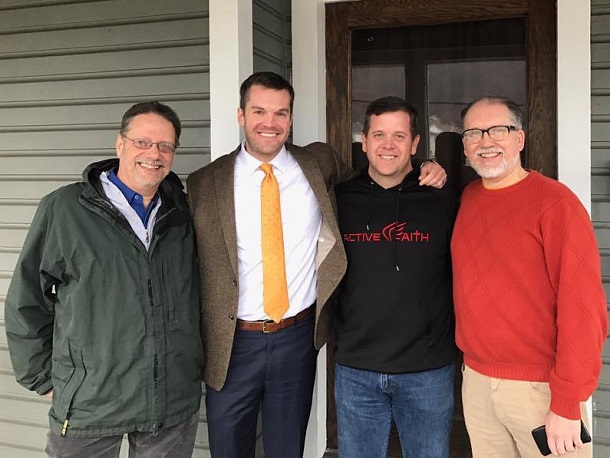 reason, he said, came thanks to his church and the Celebrate Recovery program.
“Bridgeport United Methodist Church helped save my life as much as anybody,” said Randolph. “They had people rally around me with encouragement, but they were real to me as well. I needed that as much as anything.”
There were others away from those settings, including family, that kept it “real” with Randolph. He said Tom and Jilly Steele were always sensitive, loving and caring and real with him. His pastor Dr. Ken Ramsey was the same way.
“That’s what I needed,” he said.
Randolph said the road to recovery, even with those backing him, was littered with pitfalls. More than once Ben Randolph contemplated relapse because he believed he felt he had done enough Celebrate Recovery. It was then where he turned hard to his faith and he found what he was looking for.

“I threw my hands up to the Lord and cried out for help. He helped me in a manner that’s hard to explain, but I was being helped,” said Randolph. “The Lord planted these options in my head that involved keeping a wrap on my struggles with this battle for the sake of my family and just muscle through or I could embrace what had happened to me. I could use my story to tell how God was the one who stepped in and saved me and now I needed to return the favor.”
Ben Randolph opted for option two. He felt he needed to help others from addiction or crisis in their lives.
Randolph said his employer at the time allowed him to continue to work and was helpful throughout, but he felt a call toward Christian service. Suddenly, Randolph was the director of finance for the Clarksburg Mission and today serves on their board of directors. 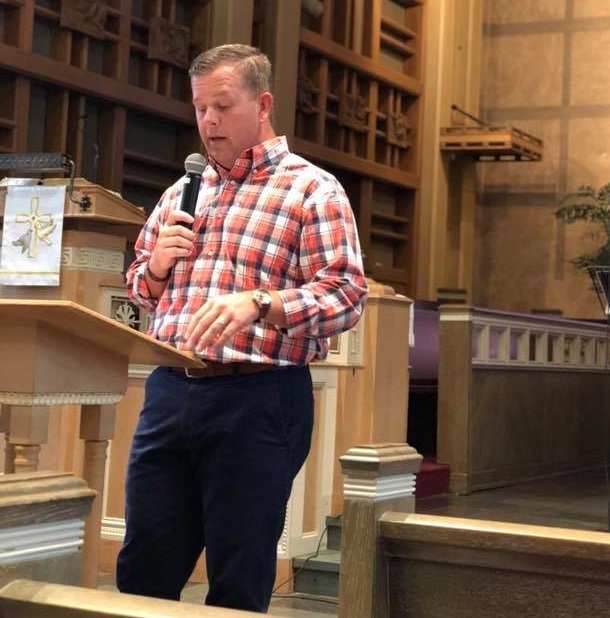 “It’s amazing what goes on there because it’s not all what you read in the paper. I found people in tough spots, humiliating positions – some positions I knew too well. I found it a blessing to work there and support them in recovery from addiction or crisis by working with them and showing Christian love,” said Randolph. “As I was helping others, I found myself getting stronger.”
Randolph stayed in that position until 2017. Then, he became the CFO of a company called Supply Solutions, which is in layman’s terms a technology materials supplier from hard hats to fiber optic cables.
“The good news was I was able to continue my service on their board,” said Randolph. “I thought that was how this would end, but there was more.”
Indeed, there was. As Randolph recovered he wrestled with the call to minister. As his foundation became stable over the course of his time in recovery and his new professions, he approached Dr. Ramsey about the call.
“I decided I was going to do it and (Ramsey) was just a great mentor guiding me through the steps and God took care of the rest,” said Randolph.
Today, along with his company work, Ben Randolph is an Associate Pastor at Bridgeport United Methodist Church. It’s the church he grew up in. It’s the church where he was married. It was the church where he was baptized.
It’s the church that played a large part in saving his life.
“I believe the Lord has put me there to pour back into others what He poured into me and that’s love, care and direction,” said Randolph. “As for the addiction, I have a different perspective than most, and I offer help there, and with all I do as pastor, with humility and honor and with all glory to God.”
Randolph does offer a warning to parents, spouses and others. And that is that anyone can get caught up in what he did to extremes of a lesser or greater extent.
“If you suspect something, don’t believe it can’t happen to someone you love. Don’t turn a blind eye; talk to someone. Talk to me. Have that conversation because there’s no room nor time for shame,” he said. “Addiction is a disease and being ashamed of it or ashamed because someone you love may be impacted won’t change it. Act on it and act on it now.”
As for Randolph, he ended his story with the person who he believes may have had the hardest time standing beside him as he fell, battled to get back up and finally did. His wife Christa.
“She, to this day, is my source of strength,” said Randolph. “She’s the source me and for my kids and I’ll forever be thankful.”
Editor's Note: Top photo shows Ben Randolph, second from left with his wife, and Rev. Ken Ramsey middle and his two children Taylor and Alex after his licensing as a minister. The second photo shows a session of Celebrate Recovery at the Bridgeport United Methodist Church; the same program he took part in. Photos after that are of Randolph with his children, preaching and the group photo shows Randolph, second from right, with - from left - current Mission Director Lou Ortenzio, Doug Leech who started Morgantown Sober Living, and past Mission Director Chris Mullett. All photos courtesy of Ben Randolph.