By Jeff Toquinto on November 28, 2020 from ToquiNotes

You might find it hard to believe by looking at me, but at one time I was a very picky eater. Of course, after obliterating my most recently prepared Thanksgiving Day meal, finding a jury of my peers to believe that might be near impossible.

Early in my life, probably until my mid-20s, while I never had a problem eating a lot, I did have a problem eating a lot of different kind of foods. One of my big hang ups was the texture of food and it is still somewhat of an issue to this day.
My mother actually had to make a special type of stuffing/dressing on Thanksgiving because I simply couldn’t eat her regular dressing – or even the famous Stove Top brand – because it contained bits of celery and other crunchy things that might turn my stomach.
And it wasn’t just stuffing. Mashed potatoes with lumps – forget it. Spaghetti sauce that looked like there were bits of tomato in it was off limits. And anything that had a flicker of a mushroom in it, well, I wasn’t going to eat it.
A good part of my food revival came when I met my wife. She’s not too shabby as a cook and, well, her consistent pestering to keep trying things eventually paid off.
Perhaps her first real triumph is one I always think about this time of year. Maybe it’s just the fact that Thanksgiving and Christmas are known for turkey and ham, but I always – and I mean always – think about the Pure Food Store that was last situated on the intersection of Water Street and Virginia Avenue.
Long before I ever set foot inside Pure Food, my wife Valerie’s neighbor – the late Don Hinkle who used to run Preferred Properties when it was situated on Main Street – always talked about the items at the Pure Food store. In fact, he constantly asked me to try items that he had and, for the most part, I readily agreed.
To be honest, it was all good. Then, he asked me to try the ham salad from Pure Food. Immediately, I had absolutely no desire for ham salad. After all, it had things like pickles in it. I even heard rumors that some used pieces of onion and celery in their mixtures.
Despite pleas from my wife, I wouldn’t relent. Part of it was stubbornness and part of it was the fact I was certain I would gag from the taste and since we were dating, I didn’t want that to ruin what was going on. Eventually, however, I found a way to try it and not have to worry about offending Don or vomiting in front of my wife. 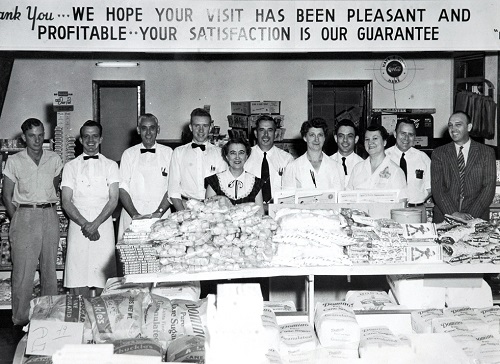 My co-worker at the time was Alexis Selby, or as many of you knows her by today, Alexis McDaniel. Alexis was a proponent of Pure Food and on more than one occasion I tagged along on a trip she took there.
It seemed like in every encounter I would run into my friend Phil Dye, the long-time and now retired Bridgeport firefighter who worked there on his off days. Eventually, I mentioned to Phil – which he probably doesn’t remember – my trepidation with things such as ham salad. Phil said I’d like what they had in the shop and, with no one around, he let me take a sample.
It was good. It was real good. It was so good that I purchased a container of it, took it over to my soon-to-be wife’s house and made up a few sandwiches on toasted bread.
To be honest, I was sad that I had missed out on this for so many years. Of course, many Bridgeporters and beyond knew all about the ham salad and so many other items that I was just getting an introduction to. According to my friend Dick Duez, the store was once lodged in the old Pierce Theater on East Main St across from what today is Ford Funeral Home. It was also located way back in the 1950s near the corner of Center and Main Street in the area where  the former Embellishments Too building now housing G.A.L., Mayor Andy Lang's business sits today.
In just a short while, I managed to eat enough ham salad to make up for not only the years that I refused to eat it, but for the years that I wasn’t even on the earth. The ham salad was that good.
Then, like my once svelte waist line, the Pure Food Store was gone. There would be no relocation this time and the store went the way of the history books.
As much as I love my wife’s Thanksgiving cooking, I think if I could get a little more of that ham salad, I might cut back on a few helpings each November. Since that won’t be happening, I’ll just have to remember how good that ham salad was to me and how good the Pure Food store was to those in Bridgeport and beyond.
Editor's Note: Photos courtesy of Dick Duez.