Calling it a "historic day," West Virginia Gov. Jim Justice announced this afternoon inside the terminal building at the North Central West Virginia Airport that the complex will be the recipient of $20 million in funding for what will essentially be a three-phase project aimed at economic development once funding requests are approved.
"This is a historic infrastructure plan," said Justice. " ... The aim is to improve the airport and turn it into a gateway for West Virginia."
The plan will develop surrounding land at the airport for commercial and industrial use. It will also create land that will be used for a new terminal building that will be situated just off of State Route 279, giving the airport much-desired direct access off of a four-lane roadway. 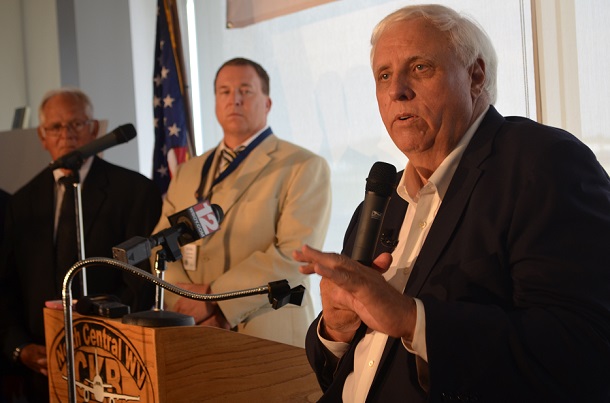 “(The terminal) will be able to accommodate any size and any type of airplane that the runway can handle,” said Justice of the 7,800-foot runway.
The terminal building will be the first construction to take place as millions of dollars in earth work takes place in that phase as well as the others. Bridgeport Mayor Andy Lang, who sits on the Benedum Airport Authority (the airport’s governing body), said the best-case scenario would have the new terminal open by the spring of 2022.
“I hate to say it, but your beautiful terminal isn’t beautiful,” said Justice, gaining a round of laughter from the hundreds in attendance. “… If you want to be a gateway you can’t have the beautiful terminal that you have today.”
The terminal is listed as Phase I of what is a three-phased project utilizing the $20 million. Phase II will create 50 acres with direct taxiway access to the runway The property in question is what’s often called “the mountain” behind the runway and between the Rish Equipment 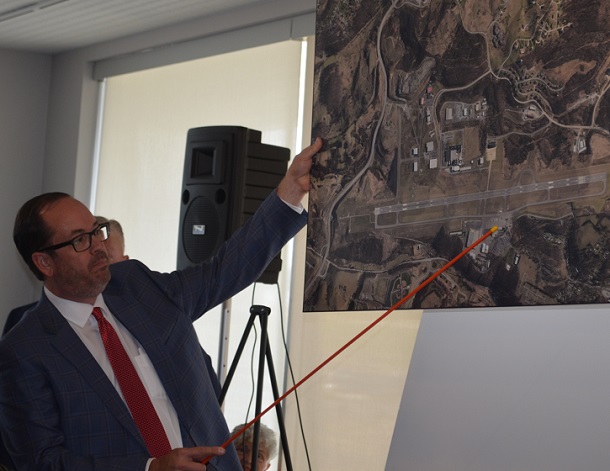 site situated near the intersection of Route 279 and U.S. Route 50.
The land that will be created can be utilized for Aerotech, commercial and industrial use. The earth that is moved from this portion of the project will be utilized to help create land needed for the site housing the new terminal.
The third phase will develop more land, which will not have access to the runway. However, the plan is to have the level land to allow for additional commercial and industrial use. One of the projects would be a logistics park in the area of Route 50 where it intersects with Route 76.
The airport does not own all the land shown in the third phase, but officials said discussion on acquiring the property has already taken place. If acquired, the airport would have the bulk of the land from where it starts and cushioned between Route 50 and State Route 279.
Harrison County Commissioner and Authority member David Hinkle said that the first two phases will be done in conjunction with one another. Both Hinkle and Lang held up display boards that showed the physical locations of the phases and what they entail. After the session, Lang said things could begin soon and weather shouldn’t be a factor. 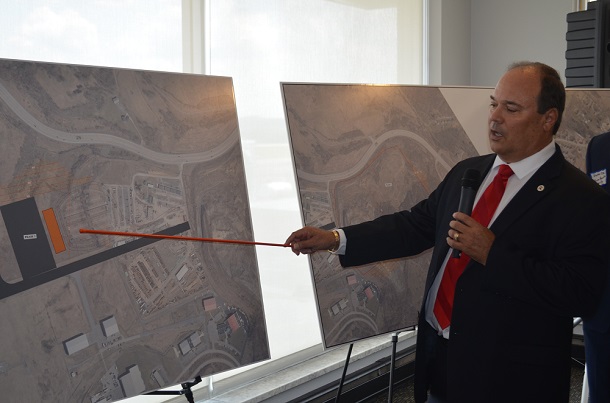 “I’d like to see some dirt being moved by the end of the year. It’s such a mass excavation type project that it can be done in the winter,” said Lang. “A lot of projects, like the Rec Complex, is such a fine grade with small fills that a little bit of rain shuts it down. You get on a mass excavation job like this right near the interstate, even in the worst of winter you can keep working.”
After talking about the phases, Justice piled praise on the Airport Authority for having property that has an economic impact of $1.1 billion annually as well as hundreds of jobs. He said they were able to do that despite “being squashed in a box.” The new land will take them out of that box.
The project has been discussed for years by the Authority. Former Authority member and current State Senator Mike Romano praised Lang and Hinkle for taking this and running with it. Justice talked about meeting with the locals such as Lang on the matter as well as area 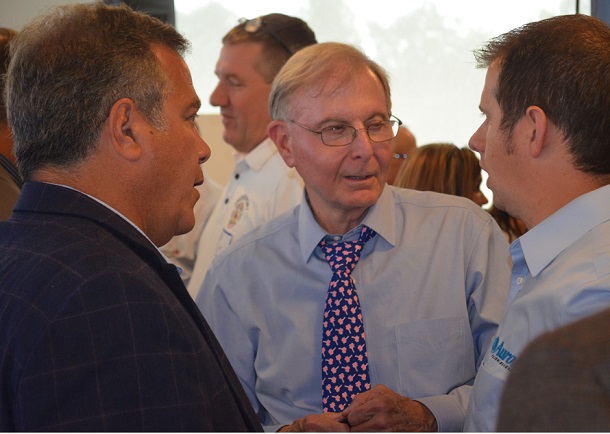 political operative Larry Puccio who was in attendance.
“This was brought to my office by a lot of individuals,” said Justice.

Justice said the only thing he didn’t like was the suggested timeline. He said he was told that sometime in the future, perhaps “the summer after next.” That, after hearing the proposal, didn’t work.
“This (project) probably jumped on me faster than anything that ever has. It’s just that good … For anybody to hesitate would have been foolish,” said Justice.
The project announced today is all part of a $70 million master plan development that’s in the works by the Benedum Airport Authority. Today’s money assures that things will get moving and with a bang.
Of the $20 million announced today, $10 million will come in a grant from the West Virginia Infrastructure and Jobs Development Council. Justice said the remaining $10 million comes as the result of working with the United States Economic Development Administration in a loan form. Justice said the money was coming today, but a post-event press release from his office says the money has been requested.
The press release stated that "For funding, the Governor has requested $10 million from the West Virginia Infrastructure Jobs Development Council to go toward jump-starting the plan. The Department of Commerce will formally request the funds from the IJDC – a body created by the West Virginia Legislature to manage and facilitate funding for infrastructure and other projects – on the Governor’s behalf.
"Leaders with the IJDC will review the request and give final approval before the funds can be officially transferred for use on the project.
"Gov. Justice has also requested an additional $10 million in the form of a loan from the West Virginia Economic Development Administration. The review process for this request is ongoing as well," the statement in the press release ended.
Editor's Note: Top photo shows, from left, Harrison County Commissioner and Airport Authority President Ron Watson, NCWV Airport Director Rick Rock and Gov. Jim Justice. Second photo is of Bridgeport Mayor Andy Lang, while the third photo is of Harrison County Commissioner David Hinkle. Both Lang and Hinkle are also Authority members. Bottom photo shows Justice Advisor Bray Cary.