Back on August 6, Governor Jim Justice was in Bridgeport announcing millions of dollars that would be headed toward Bridgeport and the North Central West Virginia Airport. The feature piece of the announcement involved a new terminal building that would be situated off State Route 279 and giving the airport direct four-lane access to its customers. 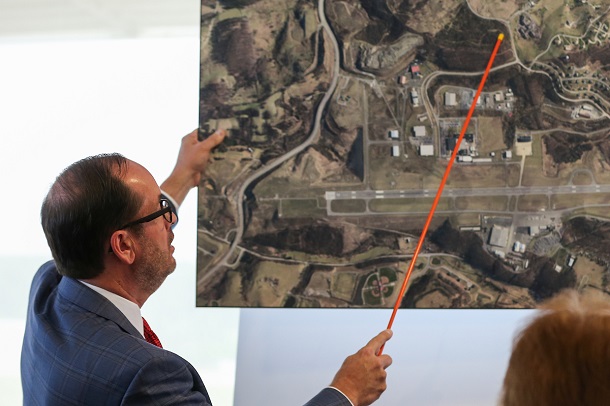 Although things have been quiet publicly, that doesn’t mean the project is stalled. In fact, it’s just the opposite.
Bridgeport Mayor Andy Lang, who sits on the Benedum Airport Authority (which operates North Central West Virginia Airport) and its Special Projects Committee, said the first of three phases is expected to be put out to bid sooner rather than later. By “sooner,” he means within months.
“The plan is to put the first phase of this project out to bid in the first quarter of 2020,” said Lang.
The first phase involves the excavation of the site where the terminal will be located. That will be followed by involvement and work with the FAA as it relates to the terminal site, creating taxiways, a tarmac, the apron and other issues involving how planes access the property. The final phase is the actual construction of the terminal building and the parking lot.
The first phase will largely be funded by a $10 million Infrastructure Jobs and Development Council grant and other matching funds, said Lang. The entire project is estimated to be in the $47 million range.
“We’re good with funding on the excavation and then we’ll continue to work with the FAA and our representatives on discretionary federal funds. (The airport) already receives AIP (Airport Improvement Project) funds from the FAA annually do to upkeep and projects, but they have discretionary funds you have to apply for and that’s where we hope to see even more dollars come in.” 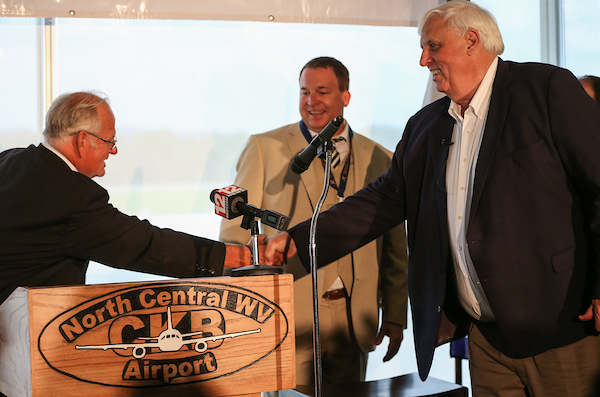 The discretionary funds would only be good for the second phase of the project that the FAA will be heavily involved with, Lang said. The third phase, that involves the terminal construction, will be a combination of local, state, county (Harrison and Marion – the co-owners of the airport) and some of the airport’s own funds, said Lang.
“There will be some debt with this,” said Lang. “The goal is to get the debt as low as possible by going after every dollar available.”
Some recent good news? Lang said the currently terminal building recently had a 30-year bond paid off.
“That’s how business life works. You have the debt for the period of 30 to 40 years, pay it off after you’ve used it for that time period,” said Lang. “That’s exactly how it happened with the first terminal.”
The showpiece will be the completed terminal. There was talk by Authority liaison and State Senator Mike Romano to make sure it was a signature piece. While Lang hopes that to be the case, he said cost is going to have to be a factor.
“Our first goal will be to make it functional, and that could be a square box to see where the numbers add up,” said Lang. “If the numbers are right and we can start adding touches that make it stand out, that’s the direction I’m inclined to take. We’re going to have debt with this, but we can’t take on debt we don’t have to for the purposes of a spectacular building. Function will be first, but we certainly want it to look good. We just can’t take on unnecessary debt because the is for the benefit of all of North Central West Virginia."
While Lang is confident this project will begin in 2020, he did add that a final hurdle will depend on the U.S. Army Corps of Engineers. The Corps will have to sign off on all changes that result relating to moving of streams, wetlands and other environmental issues.
Editor's Note: Top photo shows Mayor and Benedum Airport Authority member Andy Lang pointing out the proposed terminal project. In the bottom photo, Gov. Jim Justice, right, shakes hands with County Commission and Authority President Ron Watson as NCWV Airport Director Rick Rock looks on in the background. Photos by Joey Signorelli of www.benqueenphotography.com.