For those wondering when the next national franchise restaurant will be opening its doors just across Bridgeport’s city limits in Clarksburg, there is a New Year’s Surprise in store.
Barring something unforeseen, LongHorn Steakhouse will be opening its doors just after the start of 2023. According to Clarksburg Mayor Jimmy Marino, the planned first day open to the public is March 7, which has been updated by company officials.

“They’re moving right along,” said Marino. “I know most of the exterior is done and everything appears to be on schedule.”
According to Marino, roughly 65 percent of the work is complete, which was listed, he said, at about $1.45 million of the cost of the building. The mayor said he thought it would be done sooner, but that was based on work being finished on the Olive Garden.
“I did anticipate it sooner, but I was thinking it would start after the Olive Garden was done due to them being owned by the same company. I never was told they were going to start, but assumed that could be the case,” said Marino of the businesses that both fall under the Darden Restaurants umbrella. “Once they started, things have moved fast.”
It was nearly a year ago when Marino announced LongHorn would be taking over the site of the former Eat’n Park on Tolley Drive. The 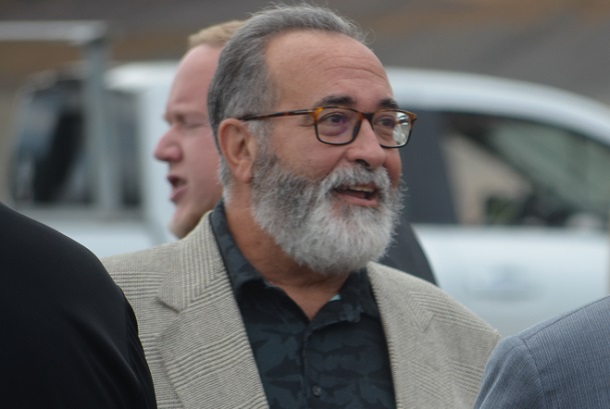 announcement came almost a year to the day – Nov. 10, 2021.
Derek Inc. is the contractor on the project. It comes with a $2.9 million cost – the same as Olive Garden in Clarksburg’s NewPointe development. The announcement has been one of several major developments in the city that draws visitors from throughout the region to Clarksburg, Bridgeport, and multiple other local destinations.
“About the only thing I wish we could do, as mayor and as a city, would be able to find more spots to fill at Eastpointe, NewPointe, and that part of our city,” said Marino. “We’ve had a good run with businesses in that area lately and that is good for the City of Clarksburg and the entire region.”
Editor's Note: Top photo shows work done last month on the exterior of the LongHorn Restaurant, while Mayor Jimmy Marino of Clarksburg is shown below.