ToquiNotes: From Halls of BHS to Shores Around the World, USMC LtCol Matt McKinney Talks his Journey

Back in 1992, Bridgeport High School senior Matt McKinney was busy being a standout student and athlete.
McKinney was good enough in sports to be an all-state performer in baseball and soccer. He was good enough in the classroom to earn something even more prestigious. McKinney received and accepted an appointment to the United States Naval Academy.
And since then, there has been a journey that not only saw him leave Annapolis, but one that took him back to sports and the classroom at West Virginia University and, ultimately, back to the armed forces. To say the decisions made have turned out for the best may be an 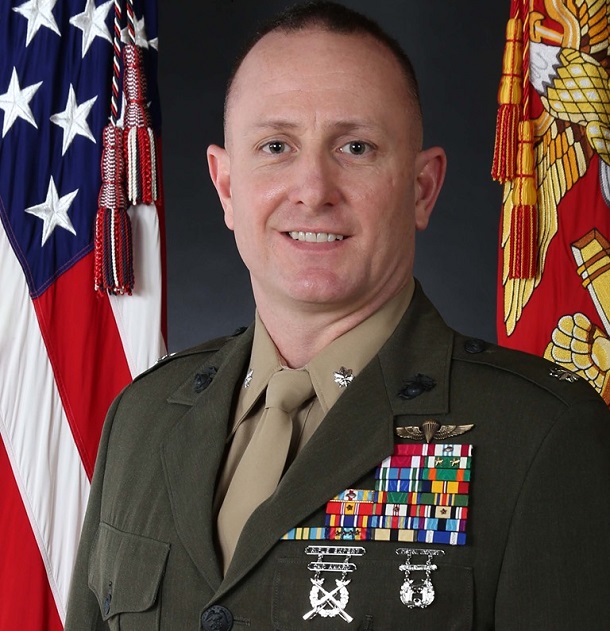 understatement.
For more than 20 years, McKinney has crisscrossed parts of the country to live and portions of the world to serve. Since 2016, Matt McKinney is officially known as Lieutenant Colonel Matt McKinney and he is currently leading his crew and serving his country in the Arabian Gulf.
McKinney’s latest promotion to lieutenant colonel left him as the service officer of the United States Marines Barracks in Washington D.C. The location is known as “8th and I,” for the streets that intersect on the Marine Barracks.
“It’s the oldest continually serving post in the Marine Corps,” said McKinney. “It is responsible for sacred and ceremonial duties in support of the President of the United States and the Marine Corps.”
Right now, McKinney is in command of Combat Logistics Battalion 26 and the group deployed in December with the 26th Marine Expeditionary Unit.
“It was supposed to be a Mediterranean deployment for theater support with allies,” said McKinney. “That changed after the assassination of (Iraq General Qasem) Soleimani.” That led the group to the Arabian Gulf.
McKinney is Commanding Officer for Troops of the USS Oak Hill LSD (Landing Ship Dock) 61, an amphibious ship named in honor of 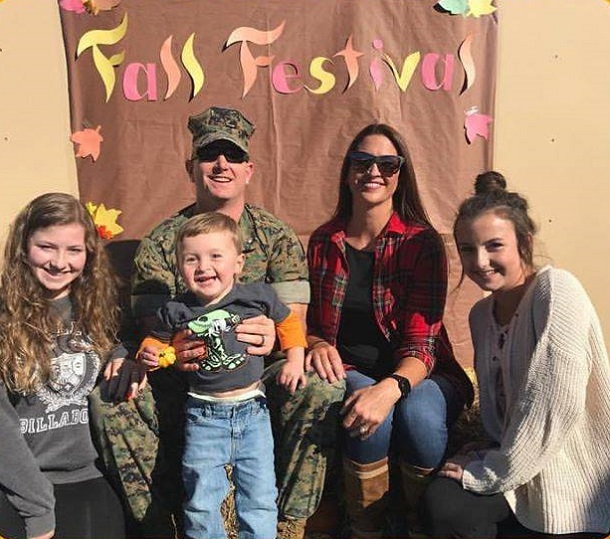 President James Monroe’s home. The 600-foot long Oak Hill houses a crew of 350 and 400 marines.
“It’s obviously a serious responsibility,” said McKinney. “You have to balance the daily grudge of living on a ship and dealing with basic things like the air conditioning not being the greatest. You expect it and deal with it.”
That is not unusual. This deployment, however, has the added misfortune of dealing with COVID-19.
“Because of COVID, we haven’t been able to go ashore and do training … Normally, we would partner on shore in training with our partner nations,” said McKinney.
Prior to the COVID-19 pandemic, there were exercises. While the group was in the Red Sea, McKinney said training took place with Kuwait, Saudi Arabia, Jordan, and the United Arab Emirates.
While not going ashore, his group is wrapping up an exercise today. U.S. and Saudi forces are conducting routine and joint sustainment training on and around Karan and Kurayn islands.
“The easiest thing now is you’re always expecting the unexpected because it doesn’t go the way it’s planned. As you get older, you deal with adversity much better,” said McKinney. “The young folks involved expect things one way and are disappointed when it doesn’t happen, so I coach them through it. If changes dictate the inability to make a decision the goal is still to execute the mission.”
McKinney, who still has the great sense of humor he had back in his prep and college days, talks like a military man when the subject goes to the Marines. The fact that he has always been a leader, going back to his days on the baseball and soccer fields at BHS, probably does not surprise you that he is a lieutenant colonel. 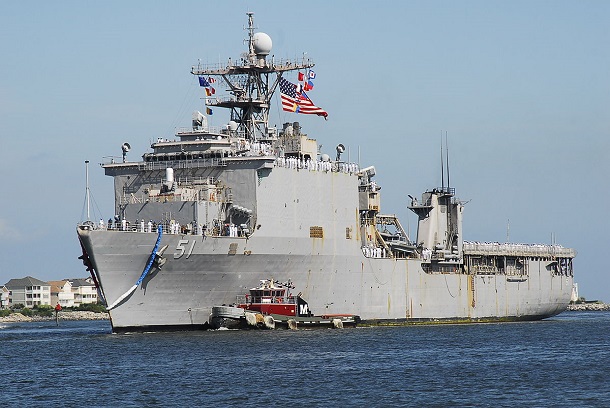 The best part? He has the possibility of being a United States Marine Colonel.
“I’ll be in line soon for promotion to Colonel. If selected, I see myself doing another five to 10 years. If not, I’ll probably be limited to five years,” said McKinney.
As for his next stop, when he gets back, he will be heading to Camp Lejeune in North Carolina before doing a back in the classroom student gig at the Air War College of the United States Air Force in Montgomery, Alabama where his next residency stop will take him.
“I actually don’t mind it too much,” said McKinney of the frequent moves.
And the moves have been plenty since he left Bridgeport high school. The constants, after a whole lot of moving physically and professionally, was settling in with the USMC and family.
McKinney spent two years with the Naval Academy before he went through the formal process of requesting permission to resign. Once that was granted, McKinney found himself back in the Mountain State at WVU playing baseball.
McKinney graduated and found success on the diamond. He helped the slumbering WVU program to a Big East title in 1996.
After leaving WVU, McKinney worked at Bally’s Health Club in Tampa. Although serving as a manager at the facility in the Sunshine State, he was far from content. Eventually, he headed back to Morgantown where he got a year of law school under his belt before he decided to 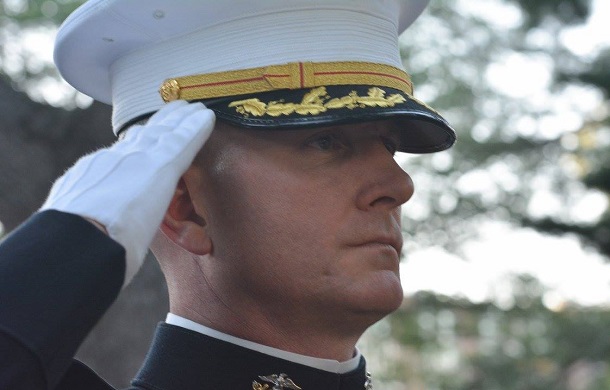 make yet another move.
McKinney went into the Marine Corps. He was commissioned in 1999.
Unlike most professions, you do not fill out an application and start after they like what they see. Instead, McKinney went to Officer Candidate School, which was a 10-week course in Quantico, Va., after he did apply. However, the successful application simply put him on the path to take the course, which he passed.
“Once I got through that, I took a six-month course known as the ‘basic school.’  … If you’re going to become a platoon commander, you have to get through this course,” said McKinney several years ago in a prior interview.
From that point forward, McKinney not only leapfrogged from courses, training, and assignments, he also found himself moving to new locations and eventually being deployed to places far away. He spent time in Camp Lejeune, NC; Twentynine Palms in California; Tampa in Florida; and then to Montgomery, Alabama and then to Washington, D.C. where he was at until the most recent moves will have him back to Alabama where he'll return to the classroom.
McKinney has been deployed to Okinawa, Japan and followed that with deployment to the Middle East in July of 2005. He was part of Operation Iraqi Freedom and saw combat during his time as a captain.
The job has taken him all over the world – including many hot spots. He has been in Jalalabad in Afghanistan, served as the logistics director for Special Operations Command (forward)-Pakistan. McKinney has been in Morocco, Spain, and Djibouti. And during his multiple areas and locations of work stateside, he found time to pick up his master’s degree with the title of Master of Military Operational Art and Science.
Through all of that, McKinney is also a husband and father. He is married to the former Kelsey Gregis of Bridgeport and has two daughters, Maddie 19, and Haley 16, along with a four-year-old son Killian.
“It’s all over the place at time, but I have no regrets at all. I wouldn’t change a thing,” said McKinney.
Editor's Note: Top photo shows Matt McKinney in a formal military portrait, while he's shown with his family in the second photo. The third photo is from 2009 and is a released U.S. Navy photo by Mass Communication Specialist 2nd Class Nikki Smith of the USS Oak Hill. Bottom photo is of McKinney standing at salute taken by Sharon Valencia, who runs the Random Acts of Kindness Project (Facebook page HERE). Top two and bottom photo courtesy of Matt McKinney.